They will flood the market with collectibles. The earth itself will crack with the weight of what they place upon the table. They will not restrain themselves. I am as sure of this as I am about the color of my own eyes (Cornflower by Crayola). Because if a little of a good thing is good then a lot of a good thing is great and too much of a good thing is only a problem for the buyers, not the sellers.

It starts with a trickle and looks, smells, tastes and feels like easy money, which attracts lots of attention (buyers). Lots of attention attracts more sellers, more product creation, more marketing, bigger waves of product, larger dollar amounts per product, etc. It spirals out of control until all the demand has been met. And then it keeps going until everyone is soaked with product and every ounce of liquid has been wrung out of the rag.

I personally guarantee that this will be the end result in the aggregate. I just can’t put a date on it. The date will depend on you, and how thirsty you are, and how many of you show up, and with what dollar amounts.

All of the ingredients for this thing are in place. Which is why I don’t think it’s over any time soon.

Let’s start with there being no cost of capital. Low interest rates will usually lead to increased gambling and people paying up for things that don’t have a cashflow and are not necessary for, you know, sustaining life.

I don’t think “low rates” are the whole story here. There are lots of other elements. Loneliness and idle time factor into the sudden enthusiasm for casino behavior and guessing games. I won’t go so far as to say lack of sex for young men, because Scott Galloway did that and got himself canceled back to the Stone Age on Twitter. Scott’s powers only grow with cancelation, so do your worst 😉 I think the massive stock market rally and even the boost in suburban real estate values have been the supportive backdrop for this whole thing in the same way that 1999’s dot com silliness undergirded the Beanie Baby mania. Beanie Babies are a punchline now but back then there were 100,000 of them being hidden in a warehouse to create scarcity while select stuffed animals were changing hands for tens of thousands of dollars. The numbers and dollars seem quaint to us now but the mentality was identical.

But the main factor is bigger than behavior or interest rates. The main factor is cash. It’s f***ing everywhere. Here’s Ed Yardeni, writing about the explosion in the money supply back in early February:

Today, let’s focus on the monetary aggregates, showing how much they are up y/y through the week of January 25 in billions of dollars and on a percent-change basis:

(3) Digital printing press. Where did all this money come from? Uncle Sam is our Daddy Warbucks thanks to his digital printing press department, which Melissa and I have dubbed “T-Fed.” The Treasury sent checks to the public during April and May and again in January. More are coming. The Fed has purchased $3.0 trillion in US Treasuries and mortgage-backed securities since the first week of March 2020 through the week of January 25. These transactions all have boosted M1 and M2. The system is flush with liquidity.

More is coming, but here’s what’s happened with M2 money supply so far, also via Ed: 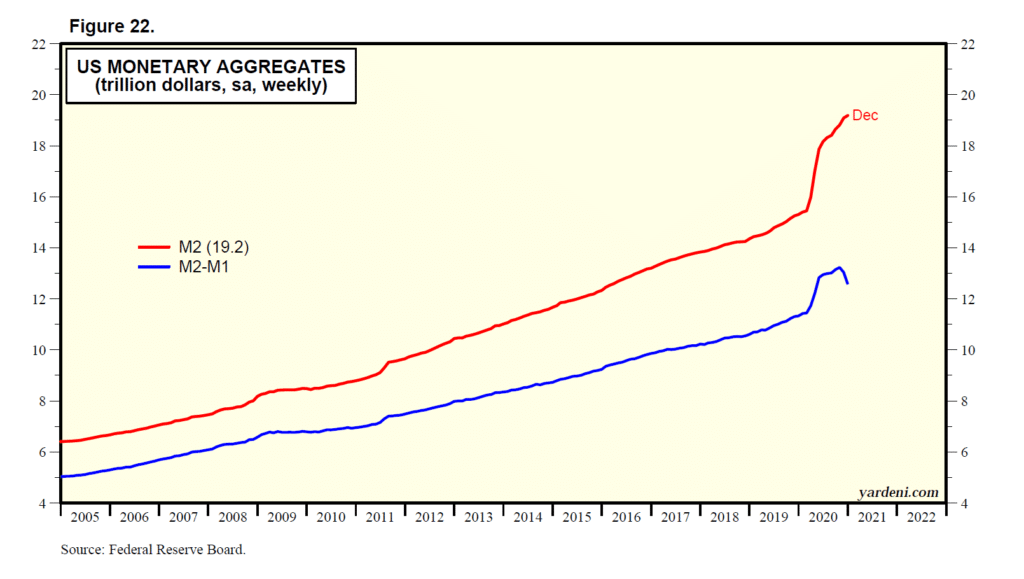 Now, an explosion in cash and a booming stock market could not have produced the collectibles (and digital collectibles) boom in a vacuum. There has to be a lot of public interest too. No one is holding a gun to people’s heads to buy NBA TopShot. The technology is cool. People love NBA clips. And, at least for now, there actually is real scarcity for these “assets.” I think the company behind TopShot (and the NBA and NBA Players’ Union) are wise enough to keep from flooding their own market at this stage in the game, but can the NFL be far behind? MLB? NHL? Music? Fashion? Nascar? Comics? Anime?

What happens is that the technology allows for anyone to start creating and distributing collectibles, from art to cards to cartoon characters – and then you end up with Michael Batnick has coined as “an abundance of scarcity.” That phrase is less oxymoronic than it might appear. You can’t have a thousand versions of the same thing and then argue that each of them preserves its own scarcity. Options for things to trade and collect are expanding. Period. I argue that they will ultimately soak up all of the demand and then drown it. A very small handful of the new wave of collectibles will retain value and ongoing interest. Most won’t.

None of the multi-millionaire and billionaire promotors of this are your friends. You are not “investing alongside them.” You are buying shit from them. Shit that costs them nothing to produce and that they are creating out of thin air in many cases. Surely you must know they are laughing about this every day. They can afford to blow up seven-figure “portfolios” of digital poker chips while attempting to turn a million into five. Can you?

A lot of people have had piles of money fall on them over the last year. If you’ve made 800% in Tesla stock or 8,000% in Ethereum, it’s hard to treat that money as you would the savings you’ve retained from working for $15 or $20 an hour at a real job. You’re more apt to gamble and speculate with found money than you are with money that you had to trade your actual time and energy for. And when windfall money has been raining down from the sky, it gets treated like “the house’s money.” Which it basically is, but that’s a whole ‘nother story. You can understand why everyone has become a speculator this year. Especially when you add in the six months of no sports on TV, the closing of the casinos and the long hours with nothing to do.

My assumption about the collectible boom (digital and physical) is that it still has a long way to run. The $1400 per household stimulus checks have not even gone out yet. The 26% growth in money supply is still velocitating around the economy like a pinball. I invented that word ‘velocitating’, but you can buy it and collect it. Anyway, it could be early. I’m jumping ahead to spoil the final scene for you just so when you see it, you know what you’re looking at.

Personally, I would rather collect a Ferrari than a digital painting. But if you can buy both, I understand that too. No one’s mad at that.

When my mom sold her house ten or fifteen years back, she let me take the record collection. A few boxes of albums from her teenage years in the 60’s and 70’s. She had all the great records of that era – every Beatles album, Simon & Garfunkel, James Taylor, Zeppelin, Stones, the Who, you name it. Now, your assumption might be that because these were in good condition, old and extremely popular, that they might be worth something to a collector. The truth is, in fact, the opposite – I couldn’t find a record store owner or collector who was interested in them.

They’re so unpopular for collectors now because they were so popular back then. Tens of millions of these albums were printed and pressed. In the case of the Beatles, perhaps hundreds of millions. As great and popular as these records were (are!), there’s no scarcity associated with them whatsoever. Everyone who wants one can find one.

This should be obvious to buyers of any kind of collectible, but based on my recent conversations with some newly minted collectibles enthusiasts, they tend to have the opposite belief. I continue to hear “Dude, get in now before everyone else,” to which I reply “Why, who else is coming to buy this stuff?”

I see. And you think the creators, manufacturers and distributors of these collectibles will sit back and allow all of the profits to be made in the secondary market as one frat bro sells to another? You think this is the one time the iron is hot and the blacksmith will stay his hand from striking? You must be kidding. The collectibles business is preparing to begin fishing with dynamite. You can practically hear the lit fuse sizzling toward us as we speak.

So, yes, have fun. But, no, this won’t end differently than prior collectible manias of the past. It’s not a matter of if, only a matter of when and what quantity of worthless shit you’re sitting on when it’s over. 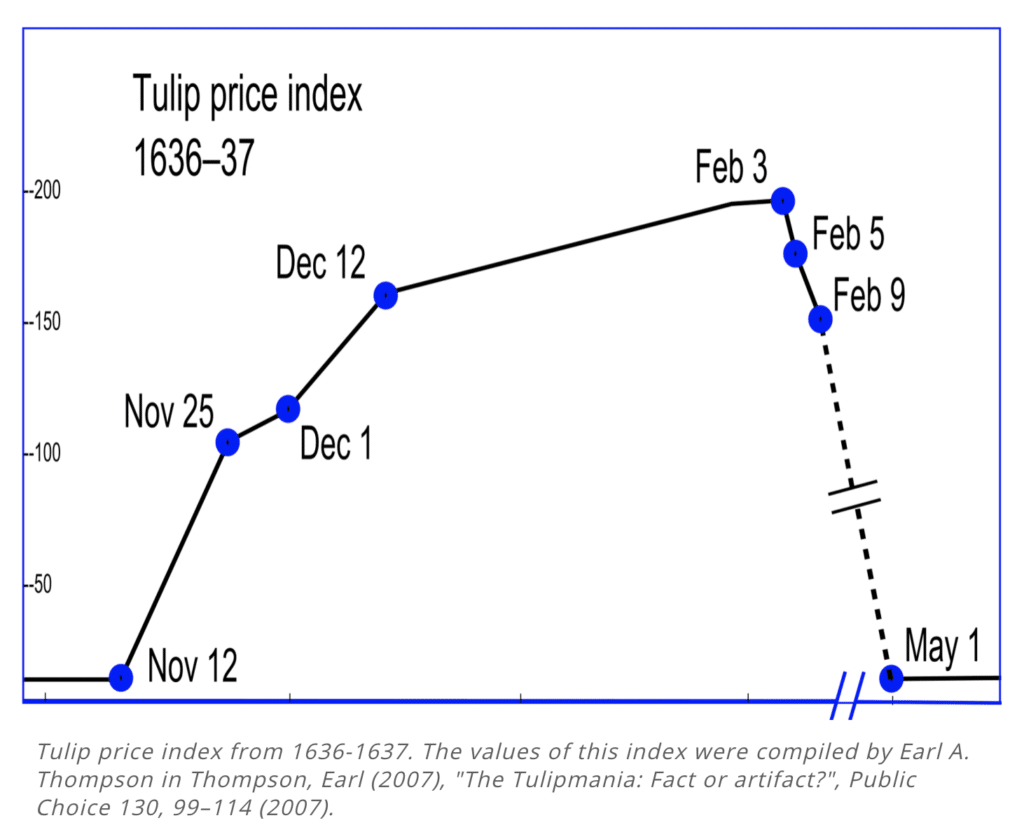 So here’s the question – do we think there will be more or less collectible items come this time next year?

Repeat after me: That sounds stupid, I’m buying some just in case.