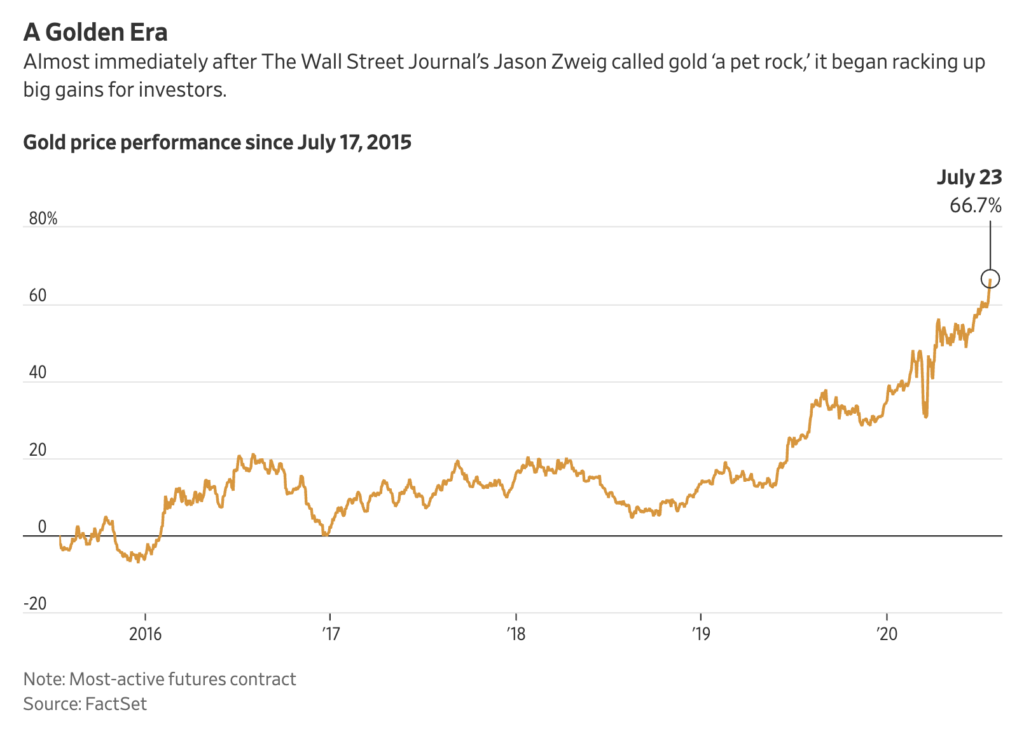 Just a quick update on the gold breakout I wrote about on July 1st. Lots of follow-through for the metals ETFs and related mining stocks. Gold is now decisively above its previous nominal highs.

In my experience, once an asset class or commodity takes out a multi-decade high, it’s probably a mistake to think you’re smarter than the crowd and fade it. Think about the wise guys who wanted to sell into the Nasdaq as it challenged the dot com bubble high of 5,000 – now it’s 10,000 just a few years later.

The gold rally feels like it’s just getting started, even though it’s been running since November. The US dollar index (dollars against a basket of currencies) is hitting 2-year lows as deficits and debt levels explode. In the meanwhile, miners benefit from constricted supply (coronavirus shutdowns) plus generational lows in fuel costs. As far as the mining stocks – lots of discovery taking place as a whole new generation is being exposed to Austrian economics, MMT debates, dollar devaluation, fiat fights, inflation, etc. Not to mention the new crop of momentum traders who’ve never seen a loss in their lives.

Here’s Peter Boockvar this morning on what’s changed since the last time gold prices hit these levels nine years ago:

With respect to gold now that it has reached a new high, surpassing the September 2011 peak, compare the fundamentals today vs then. Then, NIRP didn’t exist and I don’t believe it was even imagined as a possibility (I guess I say that naively now knowing what some central banks have pulled off). Today there is about $15 Trillion yielding less than zero. The Fed’s balance sheet was just under $3 Trillion vs about $7 Trillion today while US nominal GDP is up about 35%. The ECB’s balance sheet has tripled in size since and we know where the balance sheets of the BoJ, BoE, SNB, etc… have gone and that is way up. The 5 yr REAL yield in mid 2011 was between -.50% and -1.0% vs -1.10% today. The US national debt is at $26.5 Trillion vs about $14.5 Trillion in 2011. The dollar index in 2011 was between 75 and 80 vs 93.8 today.

Gold is up 24% year to date and has annualized at about 10.5% in the last five years, putting its returns very close to those of the stock market, with very little correlation day to day. Jason Zweig did a really great mea culpa at the Journal this weekend and took back some of the stuff he’s said about gold in the past. The graphic alone is worth the click.

Gold is attracting a lot of money in a hurry. Exchange-traded funds, which had $118 billion in gold assets a year ago, now command $215 billion. One-fifth of all that money has flowed in since Jan. 1, according to the World Gold Council, accounting for nearly half of global demand for gold. In the first half of 2020, gold-backed ETFs lured in a record $40 billion, up from $5 billion in last year’s first half.

As you can see in my chart below, while the two largest gold ETFs representing ownership of the metal itself – GLD and IAU – have risen substantially, the miners (in the ETFs GDX and GDXJ) still have a long way to recover if this thing has legs. 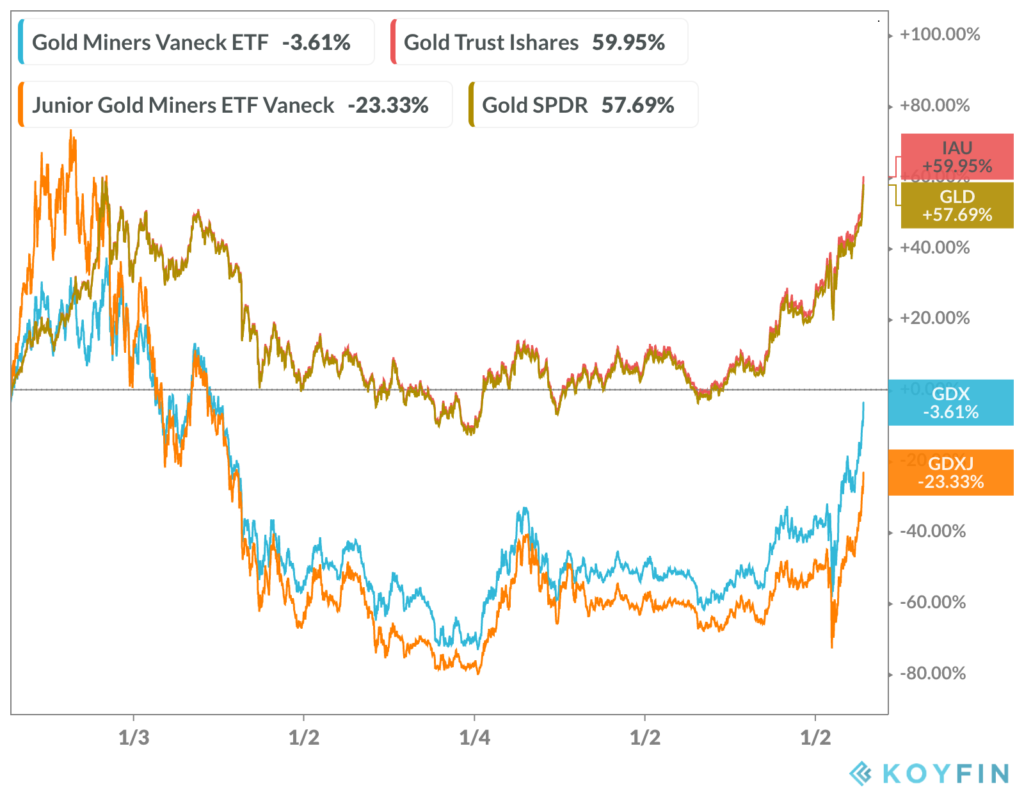 Just to reiterate – it’s a commodity, not a religion. Conduct yourself accordingly and don’t fall in love.

There goes the dollar (TRB)