Remember how Make America Great Again was all about a strong, masculine, beefy, red-blooded, double-wide, camo-clothed and fully loaded King Dollar as the signifier that the USA was back? Well, that’s not actually how things are playing out right now.

We’ve done a horrendous job with coronavirus in the United States, turning masks and the reopening into a partisan issue. The situation is now totally out of control. Rather than invest in preventative measures, increases in federal testing and tracing programs and all of the normal things you’d expect from a country’s leadership, we seem to have instead tacitly accepted hundreds of thousands of new infections each week all over the country. Masks and a cessation of political rallies would have been cheaper and gotten people back to work faster.

We went the other way.

This stark contrast between America’s national response to the challenge versus the responses of Asia and Europe is now being reflected in global asset flows.

Here’s the US dollar / Euro pair, with the greenback breaking down into multi-year lows… 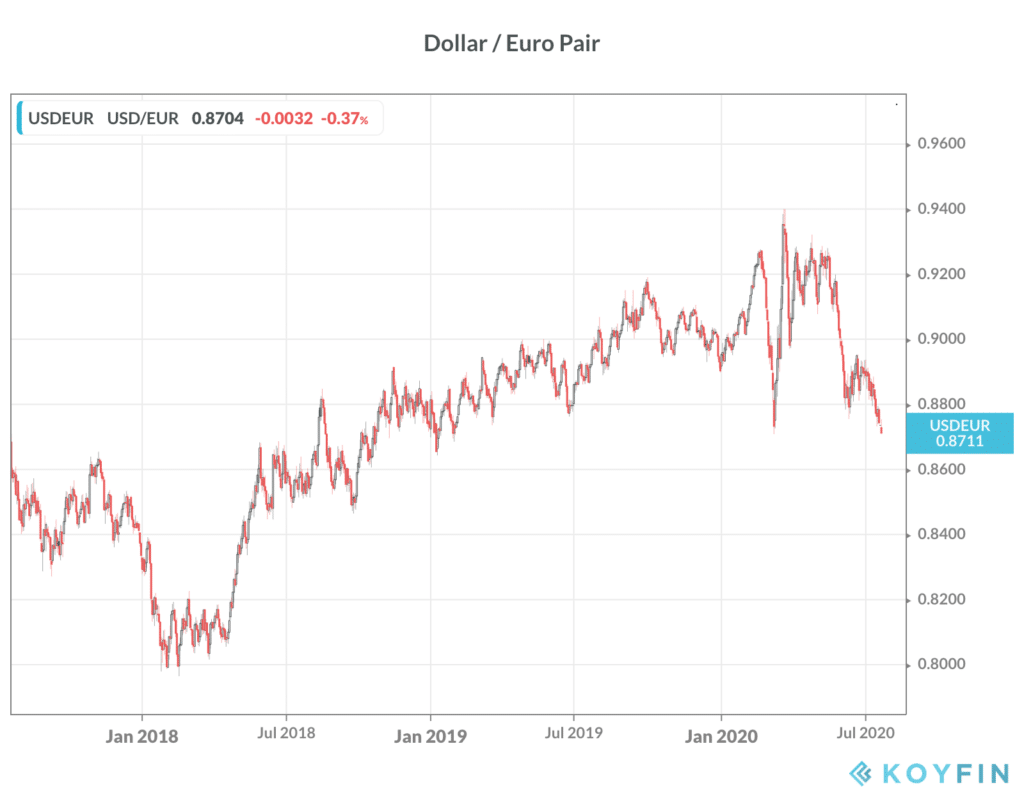 Now here’s a whole bunch of stuff that rallies when the dollar falls, over the last three months of the pandemic… 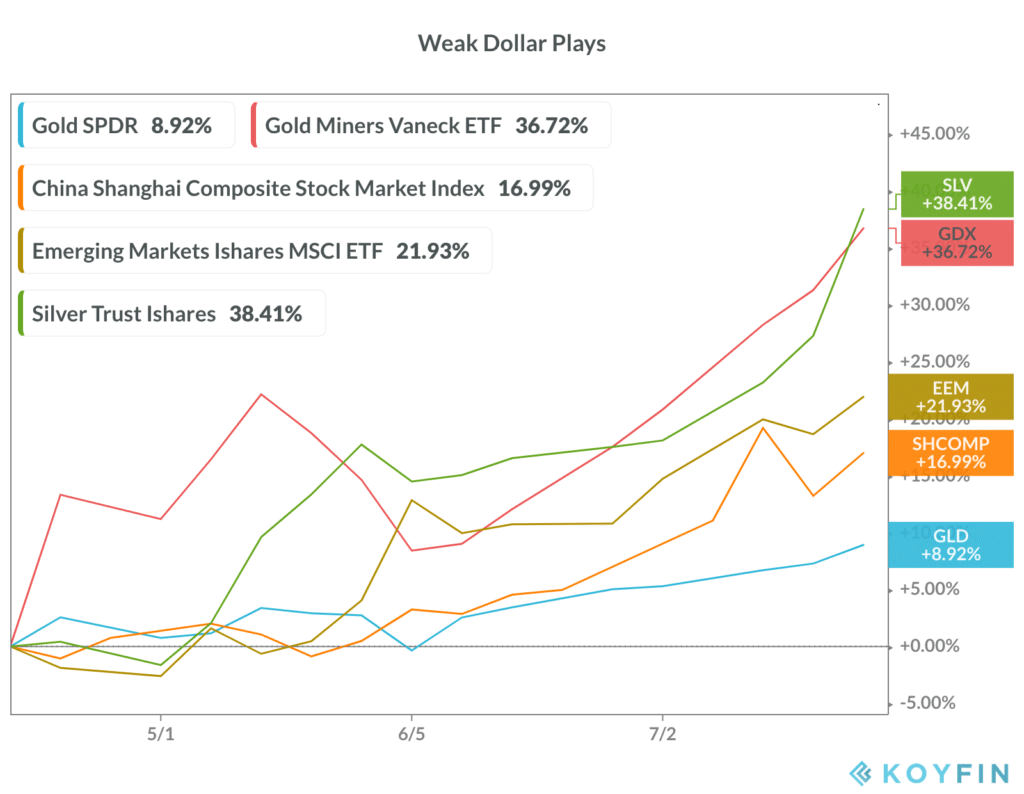 Okay, last one – this morning the nations of the European Union agreed to some major stimulus plans along with an even deeper integration. The Germans had always been reticent about being the backstopping “bank” for sovereign debt, but that’s the past. Now European countries will be issuing bonds as a bloc. Here’s the Wall Street Journal:

BRUSSELS—European Union leaders agreed on a €1.8 trillion ($2.06 trillion) spending package aimed at containing an unprecedented economic downturn by resorting to new measures that could ultimately deepen the bloc’s economic integration.

The package, built around the bloc’s first-ever issuance of hundreds of billions of euros of common debt, came together early Tuesday after four days of talks among the bloc’s 27 leaders—the bloc’s longest summit in 20 years. German Chancellor Angela Merkel and French President Emmanuel Macron were forced to compromise on what would be spent and how much would be handed out in grants.

Leaders ultimately agreed on a €750 billion recovery plan. Of that, €390 billion will be offered in grants and the rest will come in the form of loans.

Seven to ten years ago, the consensus was that a break-up of the Eurozone was the most likely outcome. Brexit made it seem even more imperiled. The pandemic has moved the conversation decidedly in the other direction.

Here’s the German stock market doubling the performance of the S&P 500 over the last 90 days, as it became apparent that one region had its act together and the other was using the virus as just another set piece to continue fighting its Culture War: 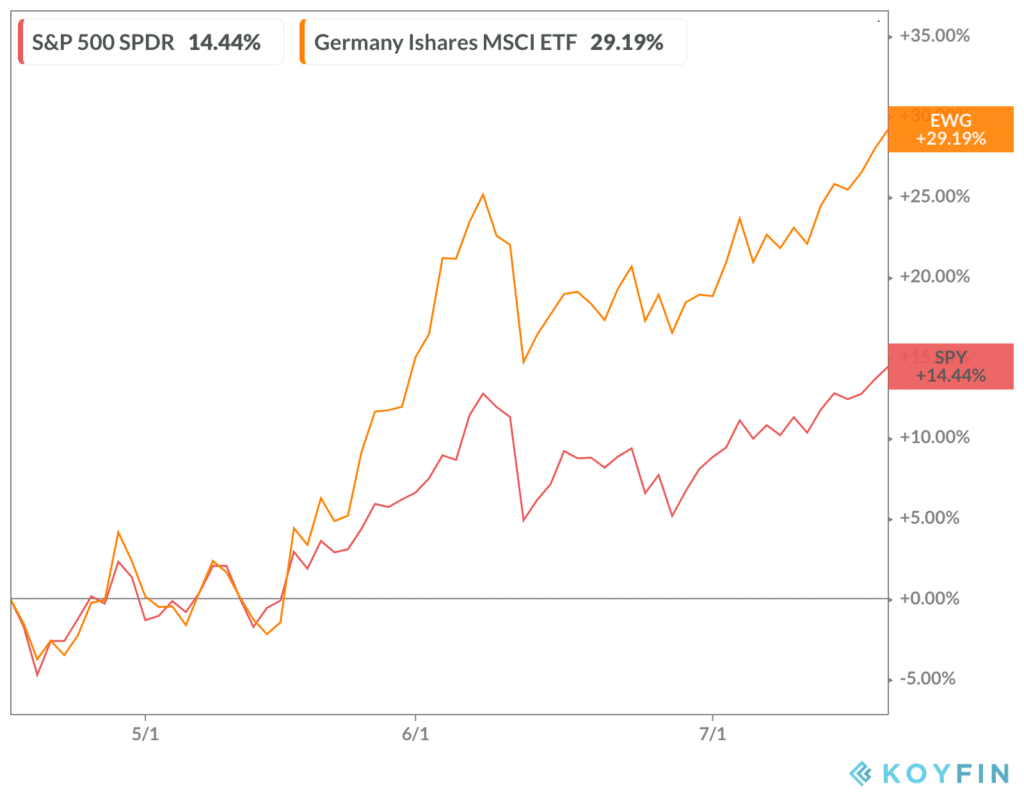 For investors with diversified portfolios, this is a moment to shine. For five years, anything other than a 100% allocation to the S&P 500 has looked “dumb.”

But those who put their eggs in multiple baskets have historically had the last laugh over time. We’ll see if this turns out to be just one more example of that.