First, here’s a look at the global recovery in stocks since the S&P 500 lows of March 23rd, about a month ago, via some of the most widely used index ETFs… 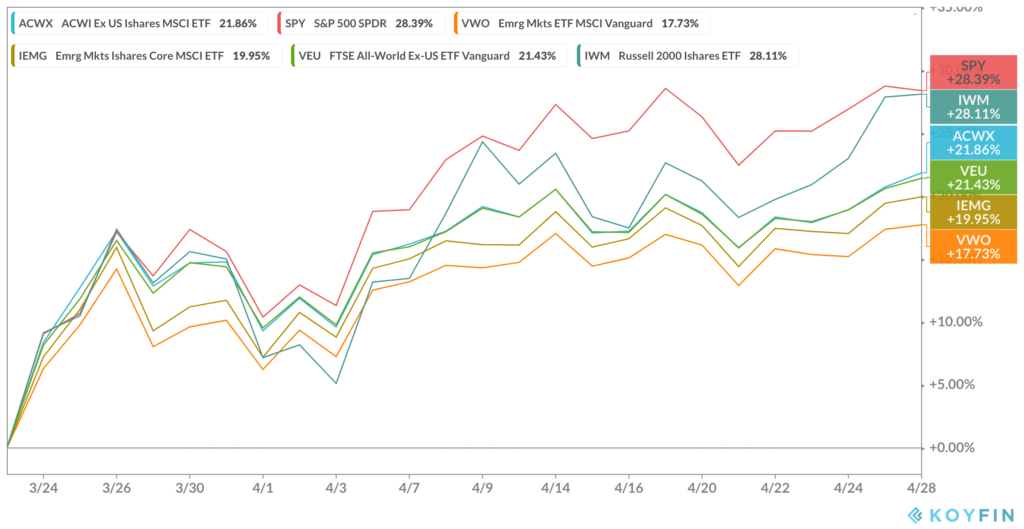 Now, my periodic reminder that investing in the stock market is not the same as investing in GDP, which you cannot do. You also cannot invest directly in employment. I guess you could make a prop bet, but you get my point.

My colleague Ben Carlson wrote a letter to clients yesterday addressing the number one issue our advisors were hearing from clients: Why does the stock market look nothing like the actual conditions of the real economy right now.

Here are two important points he made (bold is my emphasis):

Another reason many investors are having a hard time squaring the stock market with the economy is the fact that stocks typically underperform the broader economy during a recession. For instance, GDP declined just 5% and during the 2007-2009 Great Financial Crisis. Yet even with that slight GDP contraction stocks still fell over 50%. The current situation isn’t so much of a financial crisis as it is a natural disaster. The reason things got so out of control during 2008 is that the crash originated in the financial and real estate sectors and no one had a good handle on what could cause the crisis to end so investors took prices to a place that went far beyond the fundamental deterioration in the economy. The current situation is one in which you could actually see the economy inflict more pain than the stock market.

It’s also important to remember the stock market is forward-looking. The market bottomed in March of 2009 while the unemployment rate continued rising until its peak in October of that same year. This is not to say that the stock market is always prescient in its views of the future.

I point this out not to make the point that all is well or that everything that’s been broken has been fixed. In fact, my opinion is quite the opposite: There are entire industries that will never be the same again in the wake of this crisis.

But here’s the thing – the stocks that matter most to index returns tend to be well-capitalized secular growers that have rapidly figured out how to operate in the current environment. And, sadly, the end result of all the pain for small businesses is that big businesses will more easily increase market share as everyone struggles. I’m not happy about it, just pointing it out as a tragic downside to the way capitalism sometimes works in a crisis. This won’t be true in all situations, across the board. But it will be true generally.

And then there’s the whole Fed + Stimulus + Bailouts conversation that is also obviously playing a role here, which I don’t need to get into right now. You get it.

Eric Peters, writing in his Weekend Notes, makes the point that stock prices aren’t real, nor are dollar figures on a computer screen, in the same way that oil is real. Powell and Mnuchin can move money from one column to another, but they can’t exactly take physical delivery of oil or any other asset that weighs something or has to be placed somewhere:

Crude utterly collapsed. 300% in a single trading day. Sellers paid $37.63 to buyers. Everyone acted shocked, but no one really cared. Not even Powell, who has developed a falling-knife fetish but didn’t lift a finger to catch that one. Jay gets it. Oil is real. Unlike stocks and bonds, he’d have to store the stuff. So until producers cap the wells, or light up their neighbors fields like Saddam, the price will keep falling until we start driving. And besides, the Fed and Treasury believe it’s not commodity prices that need support, it’s drillers, frackers, and investors who lent them so much. The refiners need help. The guys who bought their bonds. Airlines that bought back their stock. Car companies too. Boeing. And on, and on. So they bailed out all the really big companies. In the end, risks their investors took were not risks at all, only rewards. Absorbing a financial asset glut is easy for a committed central bank. They credit a column, change a ledger, hit a button, hire the Blackrock boys. Add a server, maybe two. That’s the Fed’s storage cost. Which leaves the oil price as a rare indicator of what’s real.

In the real world, where physics apply, oil needs to be moved, handled, shipped and stored. And there is nowhere to store it. A share of stock, on the other hand, weighs nothing, can be stored digitally, and can change ownership over the airwaves. Frictionless. Dollars move back and forth with the same aplomb.

So the share price recoveries of the major stock market averages don’t necessarily have to resemble the conditions on the ground where you live. They don’t have to be representative of Main Street in Anytown, USA. And they don’t have to match up in a linear fashion with any of the data you and I are seeing from one day to the next. Stock prices encompass the news of today with sentiment about the future, along with all sorts of other agency issues that influence their fluctuations from day to day.

Now, you might have read this and said to yourself, “so, Josh is saying prices do not reflect reality right now?” Yes and no. It’s not that simple. Stock prices reflect the crowd’s opinion of reality. The crowd may be wrong directionally when we see what share prices end up doing later on. It’s also reasonable to suggest that the crowd was wrong on March 23rd, but is also wrong now. Ben calls the day to day buying and selling a “recalibration” of opinions based on new facts coming in, new fears and hopes being discounted. I think that’s right.

Nothing Matters til the Playoffs (TRB)