Some inflationary pressures related to the pandemic, like used car prices, are starting to abate. But other inflationary pressures – because of the war in Eastern Europe – are now getting worse. Food, metals, energy. Up, up, up. Regardless of the cause, the effect is the same – a significantly higher cost of living today than that of ten years ago.

Who could have seen this coming?

Turns out every real financial advisor in America. This is what we’ve all been telling our clients would be the inevitable result of time passing and a mostly accommodative Fed. It’s not hyperinflation. It’s not Zimbabwe. It’s not the Weimar Republic. It’s just what usually happens. Which is why we spent our time and energy a decade ago reinforcing the need to take equity market risk in order to have our clients’ purchasing power keep pace and exceed the rising costs that were inexorable then and are manifest now.

Fortunately, for the most part, high net worth individuals around the country listened. Equity ownership among the mass affluent, high net worth and ultra high worth investor classes has never been higher. In corporate retirement plans – 401(k), 403(b), etc – equity ownership (through mutual funds) has ballooned in the past decade. If you took your advisor’s advice and tuned out the fears of 2011, 2012, 2013, 2014, 2015, 2016, etc, you are more than equipped to contend with the cost of living today. If you were self-directed and managed to remain invested through all of the difficult moments of the past decade, you’re fine right now.

If, however, you fell prey to the charlatans of the newsletter game, the macro bullshitters of Twitter, the Bubble Boys (everything is a bubble, all the time), the Lehmanites (it’s always Lehman O’Clock somewhere!), or the very worst practitioners in financial media who use the spreading of fear and the sowing of doubt as their primary means of attracting capital – well, things probably haven’t turned out particularly well. It’s going to be hard to replace a decade’s worth of investing returns. You would need the stock market to fall 70% to get back to where it was in 2012.

I’m hoping that among my readers here, this hasn’t been an issue. We’ve been publishing constructive investment commentary seven days a week this entire time. The message? Fear and volatility are the source of your future returns and a permanent feature of investing. Not some aberrant, malicious force from which you can flee and still somehow earn the same rewards that the less risk-averse get to claim.

In simpler terms: Risk and reward are linked. Anything you try to do to decrease the former will ultimately have a commensurate effect on the latter. I’ve said this here six million different ways. I know you’re listening. I get emails and DMs about it all the time.

And here is a reminder of why you’ve had to remain invested all this time, through some of the worst headlines American history has had to offer: 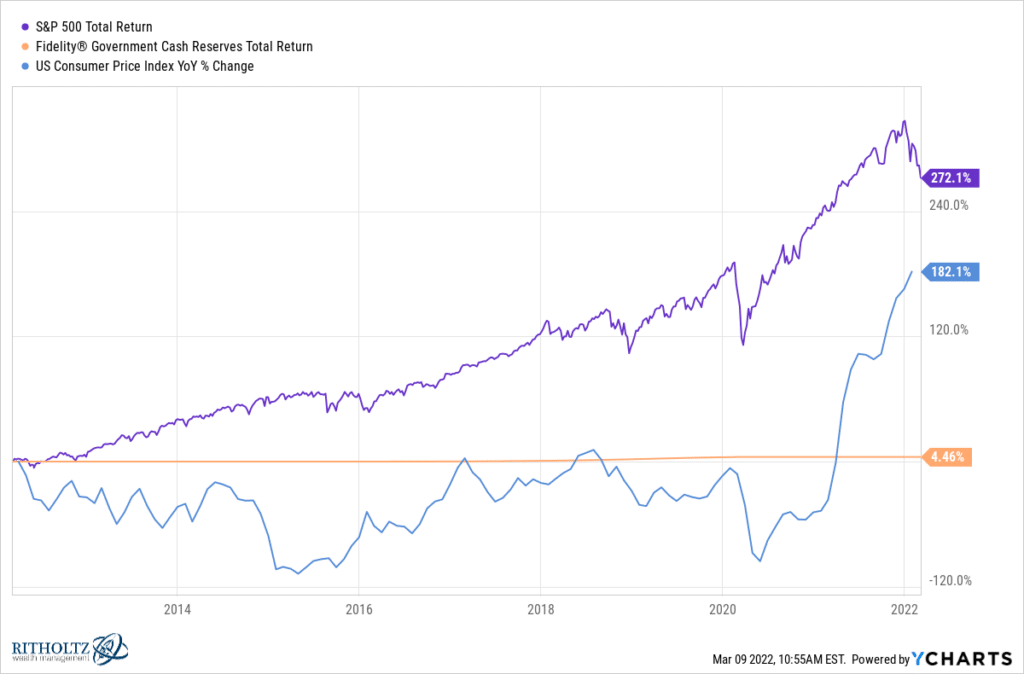 The blue line represents the cumulative growth in CPI (year over year change) over the last decade – your cost of living, give or take a gas tank or two. The purple line represents the S&P 500’s total return (dividends included) over that same period of time. While inflation seemingly soared higher out of nowhere these past six months, equity investors have been preparing for it for ten years and were ready when it arrived. We know that blue inflation line is going higher. Orange (cash) will not ever catch up. Purple (stocks) is still ahead, by a lot.

The orange line represents the total return of Fidelity’s widely held money market fund – a proxy for holding cash and taking no risk. The person who let “George Soros is buying puts” or “Janet Yellen eats babies” headlines keep them from investing gets to enjoy that 4-ish percent cumulative return for all of that safety they required while the cost of their all their living expenses has more than tripled. How safe do you feel now?

There will always be people who get paid in attention. Those people have a built-in incentive to scare you into listening to them as they string together a beaded curtain of all your worst fears, day by day, headline by headline. And before you know it, your repeated exposure to their nonsense has twisted your mind permanently, rendering you unable to see the big picture and focus on the real risks we all face in the long-term. I know this because we spent hours each day de-programming these people back in the aftermath of the Great Financial Crisis. If I had a nickel for every high net worth investor who came to us “fully hedged” or “completely in cash”, well, I’d have a lot of nickels.

Step one in this deprogramming was to stop them from reading the latest doom porn from Canadian gold mining pimps masquerading as investing experts and economists. Step two was to utilize the teachings of Jack Bogle, Nick Murray, Gene Fama and Warren Buffett to crowd out the poison that had taken hold of their mentality and kept their portfolios in a state of paralysis. We’d reinforce this wisdom with a million charts, tables, blog posts, podcast interviews, email blasts, published books, video appearances and TV hits – flooding the zone with truth and common sense so that no “alternative facts” could gain purchase. And for pretty much all of our clients, this approach works. As evidence, this work continues on through the present day, despite the latest raft of reasons to panic, which the universe will always readily supply. 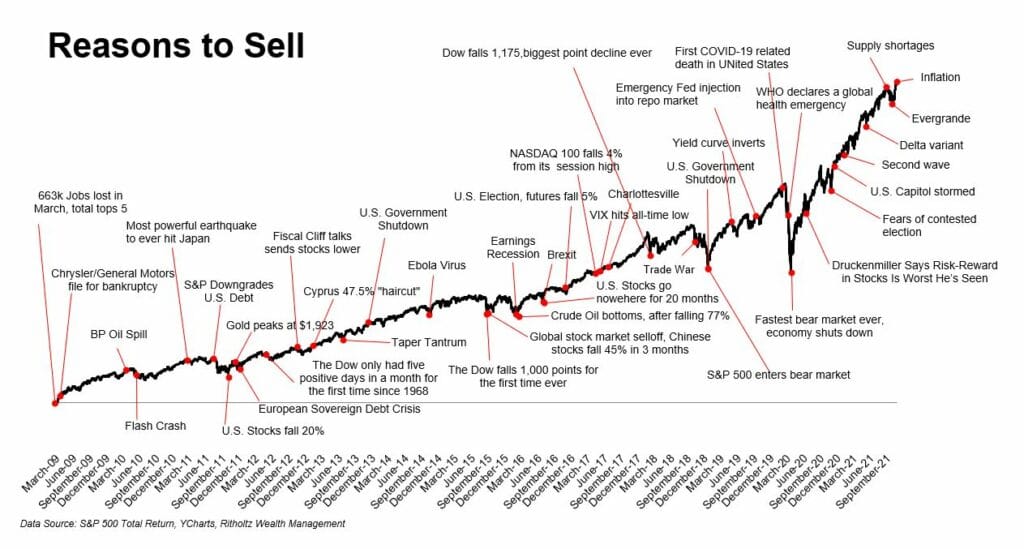 We are not alone. We didn’t invent this. Our heroes have been doing this for decades. Keeping people sane, focused on the long-term. There are thousands of financial planning and advisory firms pursuing this same approach for the rescue and continued prosperity of their clientele. We just happen to do it on a larger scale, with a lot more color. Advised clients are, for the most part, very well fortified against the current bout with inflation we’re all up against at the present moment. All of the data available on household balance sheets makes this clear. I consider this an achievement for the entire industry.

If you’re in the investing class and have excess money to deploy into retirement accounts each time you get paid – rejoice! You are among the most fortunate people on planet earth today. As Warren Buffett would say, you have already won the lottery. Now your job is not to squander this enviable position you’re in. And to take the types of actions that further your position so that you can pass these advantages along to the next generation. This involves taking intelligent risks and tuning out the noisemakers whose only intentions are to monetize your anxieties. No you do not need to trade currencies and futures and options to grow your wealth and retire in comfort. No you do not need to day trade stocks based on macroeconomic “signals” sprung from the imaginations of make-believe hedge fund managers. None of it is necessary. Some of it is entertaining. Most of it is harmful.

If you’ve already won, stay winning. Invest and prosper. Do less. Live more. Find an advisor not an astrologer. Stay out of the traps being laid for you. Don’t be a victim.

Unfortunately, there are many people in the United States for whom the present situation is a nightmare. They did not have the investment capital available to invest ten or five years ago. Their household budgets are being turned upside down by the rising cost of fuel and food. As my colleague Ben Carlson shows, energy makes up a large and growing portion of the average US household’s monthly spend.

Gasoline itself isn’t a huge part of household budgets, coming in at around 2.2% of total spending. It is worth noting these spending levels are from 2020 (the last time this survey was taken) but even in 2019 and 2018 the numbers were less than 3%. 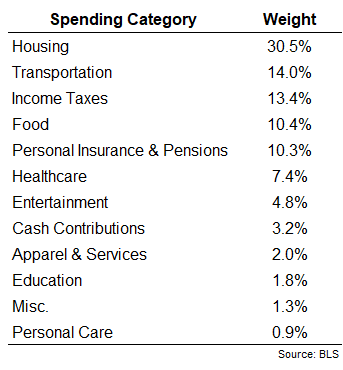 However, utilities account for around 20% of total housing costs. This means the combination of gas outlays and utilities make up almost 9% of the average household budget. With much higher prices today, that number is surely around 10% of the total now and moving higher.

Experiencing higher prices on 10% of spending is going to inflict pain on the bottom line for many households.

These are the folks who are going to need help coming out of this. Along with the “It’s too risky” crowd we discussed above. I don’t know what the answer is but creating more investors and helping them become educated as to the reasons to remain invested – that’s the only real solution I can see. We’ll continue to do our part, spreading the word and teaching the truths we’ve learned. Will you?