They’re going to try to come up with a name for this market era when they look back on it someday. “Post-pandemic” doesn’t do it justice, although the role of the pandemic in fostering this moment cannot be overstated. Still, this term better describes the economic and political landscape than the stock market itself.

So I’ve come up with my own term to capture the times we live and trade in. I think it’s perfect and I hope you will feel at liberty to adopt it yourself. I am calling this era the Age of Funcertainty. It’s a portmanteau combining the two most ubiquitous elements of today’s market environment – fun and uncertainty; the exhilaration of near-death and the instant riches in its wake. One surprise after another. Anything can happen in Funcertain Times! It’s quite a concoction.

The psychology of rollercoasters:

Enjoying roller coasters is linked to sensation seeking—the tendency to enjoy varied, novel and intense physical experiences such as rock climbing and parachute jumping. But what sensation do roller coasters provide that is so alluring?

Perhaps the draw of roller coasters is the enjoyment of the visceral sensation of fear itself, much like watching a horror movie. Physical signs of fear such as a pounding heart, faster breathing and an energy boost caused by the release of glucose are known collectively as the “fight or flight response”. We know that a roller coaster ride is likely to trigger this response thanks to researchers who measured the heart rates of riders on the double-corkscrew Coca Cola Roller in 1980s Glasgow. Heart beats per minute more than doubled from an average 70 beforehand to 153 shortly after the ride had begun.

Wait – I thought Fight or Flight was bad? Or, like, a scary thing? What’s going on? Let’s keep reading…

In another adrenalin-boosting pastime, novice bungee jumpers not only reported increased feelings of well-being, wakefulness and euphoria just after completing a jump, they also had raised levels of endorphins in the blood, well known to produce feelings of intense pleasure. Interestingly, the higher the levels of endorphins that were present, the more euphoric the jumper reported feeling. Here, then, is clear evidence that people enjoy the sensations that accompany the fight or flight response within a non-threatening environment. 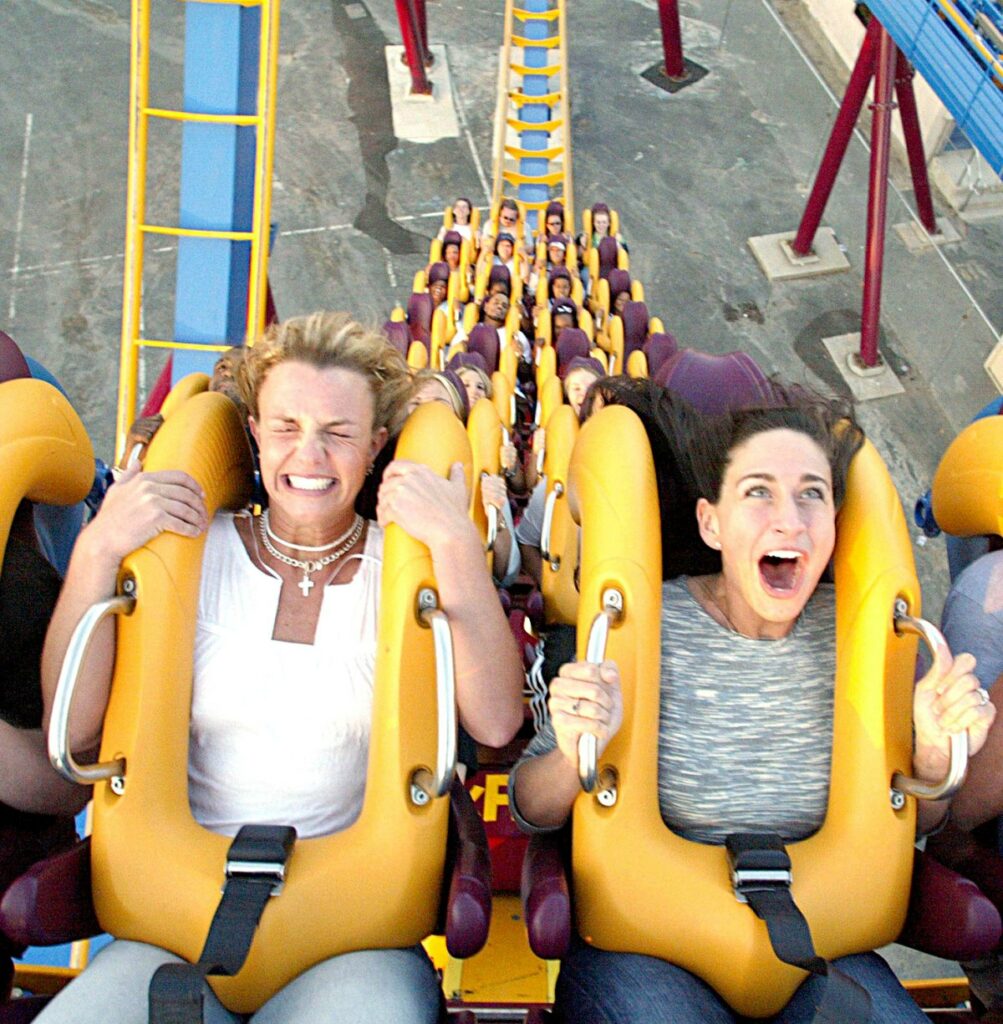 Can anyone deny that the last 18 months has been among the top stock market rollercoasters of all time? Existential panic to unbridled euphoria almost overnight. The worst, most sudden economic downturn in a century to the fastest stock market double in seventy years. But the speed of the recovery isn’t the real story here. It’s the giddiness with which we’re riding this recovery that is so remarkable, recognizable to anyone whose ever stumbled off a looping theme park coaster. Think about the last time you were at Six Flags or Disney or Universal. Getting off that first rollercoaster of the day. Even the people who were scared to climb on are climbing off with giant, goofy smiles plastered to their faces. First in line to see the picture of their car (or log, in the case of a flume) developed and for sale at the foot of the ride’s egress. There’s a glistening sweat on the foreheads of the riders, despite the fact they didn’t actually do anything but sit and grip. It’s chemical. It’s almost sexual. Again, again, again!

There’s a heightened and sustained state of arousal in today’s markets, borne of easy gains and a de facto risk-free environment. The current zeitgeist engendered by oceans of fiscal stimulus, a dearth of corporate bankruptcies, endless financing and equity capital on offer and the ironclad promises of the central banks to let the stimulus and interest rate bonanza run on “lower for longer” this time. The backdrop against which this is all taking place is a starry sky of daily IPOs, SPACs and record-setting venture capital superlatives – the largest fund, most money raised, highest amount of billion-dollar startups, most gigantic valuations, fattest first-day founder scores…You can’t look away or pretend for a moment you’re immune to the thirst. It’s practically pornographic and, well, you’re only human. We all have desires.

Where did this lust come from? So soon after a near-death experience for our entire way of life? In the first 15 months of the plague, nearly 1 in 500 Americans died. Millions got sick, around the world, and a not-insignificant percentage of them had to be hospitalized. Living through this, and surviving – not just surviving the illness but all of the fear and doubt – it can produce a very counterintuitive feeling of joy. Dare we call it a thrill? The opposite of survivor’s guilt. Survivor’s appreciation for life. A sort of bravery can set in. What doesn’t kill me makes me stronger. You’ve heard the term distress but its antonym may not be familiar to you: Eustress. The word eustress refers to the positive kind of the stress, which is actually beneficial to the person experiencing it. It comes from the Greek root eu, meaning good. Same root as Euphoria. Eustress is why the discos and nightclubs in Tel Aviv fill up after a terror attack hits the city. It’s why you walk off a rollercoaster grinning like a f***ing idiot.

According to Healthline: “Working and living outside of our comfort zone is a good thing. It’s when we feel overwhelmed that stress can turn negative. That’s what makes eustress such an important part of our overall health.” One clinical psychologist explains “Exciting or stressful events cause a chemical response in the body.” Another says “Eustress produces positive feelings of excitement, fulfillment, meaning, satisfaction, and well-being,” He goes on to say that “eustress is good because you feel confident, adequate, and stimulated by the challenge you experience from the stressor.”

Well, take this idea and multiply it by 100 million Americans, then put those Americans in a situation where, soon after learning that their life was not, in fact, about to end, they’ve got more cash in their bank accounts then ever before and virtually nowhere to use it. And lots of free time without oversight or supervision. Uncaged. Additionally, while professional sports are off the air and Vegas is closed, these escaped, newly liquid Americans happen upon the largest casino in the world – the stock market. Used to be for high rollers only but now anyone can get in if they’re on the Robinhood guest list. And then they discover an even faster, higher stakes game in the Crypto Casino. And that room goes 24 hours a day, seven days a week.

Bitcoin increases 380% between September 2020 and September 2021. Ethereum gains 883%. Cardano 2,177%. Bittorrent 1,800%. Solana 2,458%. I’m not making these numbers up, you can see them here for yourself. Now we’re drunk but we also want to be high. Who has the coke? Dogecoin, which begins as a parody, rises 9,567%. That’s nine thousand five hundred and sixty seven percent. Still not enough. Along comes Shiba Inu Coin, which is a parody of the parody. From September 2020 to September 2021, Shiba Inu Coin rises – I swear this is true – 2,399,900%. Two point three million percent. For context, it took the S&P 500 about five decades to gain 23,000%. All you had to do was buy the craziest shit imaginable and within one year you’d have outperformed Warren Buffett’s entire career since 1965.

Funcertainty is everywhere. It’s in every S&P 500 rally on the heels of a race riot being broadcast on TV. It’s in every Nasdaq record high in the midst of mass arrests over the attack on our nation’s capital. You can see it in the prospectus of every money-losing unicorn raising billions of dollars from people who can’t even spell the word prospectus let alone read one. There’s funcertainty in every NFT launch, every airdrop of a mystery token, each and every SPAC transaction while the country burns – metaphorically and actually – on the screens of our televisions each night. Looting, shooting, financial scams, the Tiger King, Tik Tok teenage financial gurus, the world’s richest man taunting congress and tweeting dick jokes, Paris Hilton’s cooking show, Brittany Spears on the loose, Kanye too, woke mobs, decentralized autonomous organizations, vaccine paranoia, a twice-impeached shadow-President with half the country in thrall to his every golf cart pronouncement from Florida. Everything is getting scarier as the casino lurches into overdrive. What are you gonna do, not play? Funcertainty, motherf***ers. Get in the game or get out of my way. 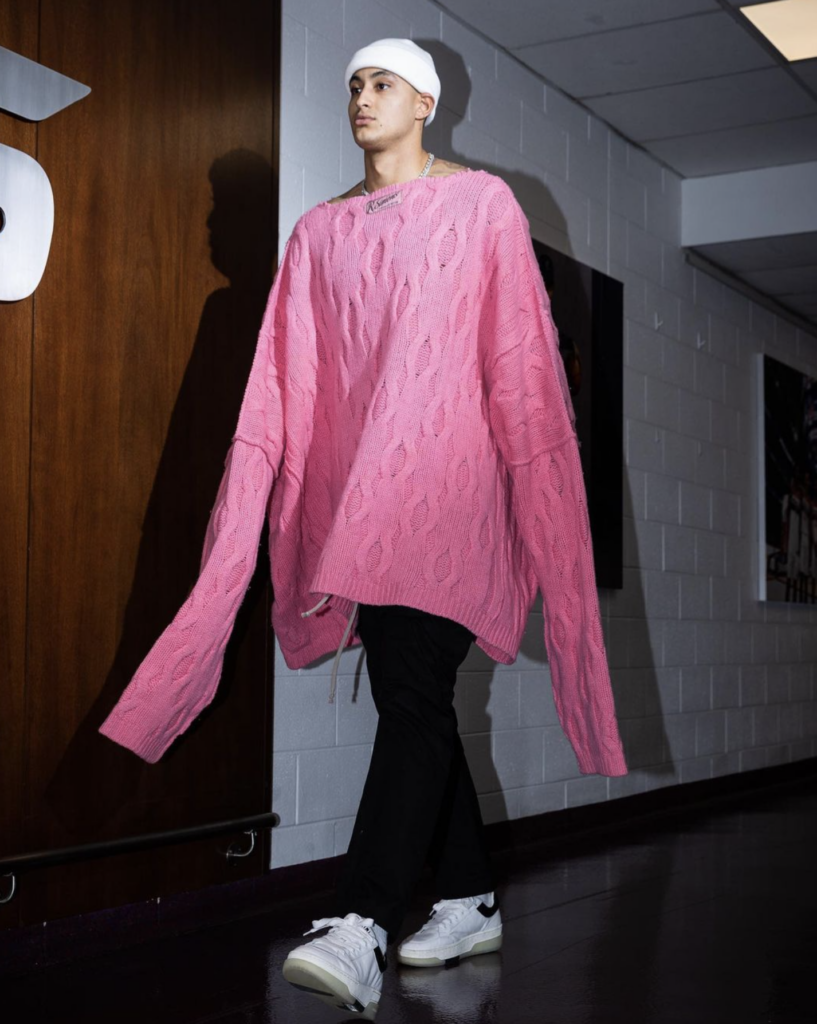 When this era draws to a close – in as ugly a manner possible I can only assume – it may well be remembered as having been more irrational than the Dot Com Bubble and zanier than the Roaring Twenties. It’s worth pointing out how long those infamous moments lasted. They didn’t feel like “moments” to those living through them. They went on for quite a while. As can this.

If history is any guide, the Age of Funcertainty may just be getting started.