I don’t know if you caught the above clip live during my show this past Friday or saw it afterward on the web. I was accused of saying “Valuation doesn’t matter” when making the case that some stocks are (and have always been) deservedly expensive over the last five to ten years. Of course, this is indisputable and obvious.

And to say it doesn’t mean you are saying that “valuation doesn’t matter.” You’re just pointing out a readily observable fact. The best performing stocks in the current era have never given you an opportunity to own them at parity with the market’s multiple or below. And why would they have? Shouldn’t the highest quality, fastest growing, best positioned companies have stocks that sell at a premium to the stocks of lesser firms? Should 2016 Amazon have sold for the same multiple as The Sports Authority? Was The Sports Authority a “less expensive” stock because it’s valuation was lower? Go ask someone who owned The Sports Authority versus Amazon. Prior to the bankruptcy, I mean.

If this sounds obvious, it is. But on television, in the heat of the moment, we often aren’t arguing facts. We’re arguing feelings. And then there’s always some degree of personal animosity that can creep in from the edges. I understand why I might personally attract my share of it. I have a big, loud mouth and I talk a lot and use a lot of ten dollar words and some people might resent me for any one of those things or all of them. Ob-La-Di, Ob-La-Da, life goes on…

Don’t worry, there are whole days and weeks where I don’t much care for myself either.

Anyway, here’s what I should have said during that segment, which would have really triggered some people out there: There is absolutely no reason why a person should expect that the valuation paid for a security will either help them or harm them in timeframes from 1 to 5 years. This is also true (and has always been true). There is no evidence that starting valuation is either a proven helper or hindrance to an investor in and of itself. Why? Because there are too many other factors that traders and investors give more weight to in the real, non-academic stock market that exists in the physical world and away from the spreadsheet. You don’t have to like it, but you have no choice other than to accept it or find a different game to play.

The charts I am going to show you are from the recent history of the stock market. It’s not a hundred-year sample size. The charts are also not meant to suggest that valuation shouldn’t play a part in portfolio construction for long-term investors. Rather, they are here to remind you that over 1, 3 or 5 year periods, anything can happen. Additionally, it might be possible that investors more highly prize other attributes about the stocks they choose to buy more highly than a trailing earnings multiple. These attributes could include anything under the sun, from revenue growth to dividend payout. From patents and intellectual property to brand value or other intangibles. From the likability of a CEO to the quality and prevalence of memes about a company’s products. From short seller interest to message board chatter. From innovation to asset sales. From index inclusion to sell-side analyst support. From hedge fund ownership to, well, you get the idea. Just because you have a metric that you find to be all-encompassing or crucial to an equity’s future outlook, that doesn’t mean everybody else has to actually give a f*** and march to your drum.

Behold, the S&P 500’s components during the modern era…

We ranked all the index’s stocks on a trailing 12 months PE ratio at the starting point for each period. Then we split it in half. The black lines below represent the more expensive 250 stocks in the SPX while the blue lines represent the least expensive 250 stocks. As you can see, ranking stocks by starting valuations on backward-looking measures like PE ratio did not do anything to increase performance in any of these three periods – in order: 1 year, 3 year, 5 year: 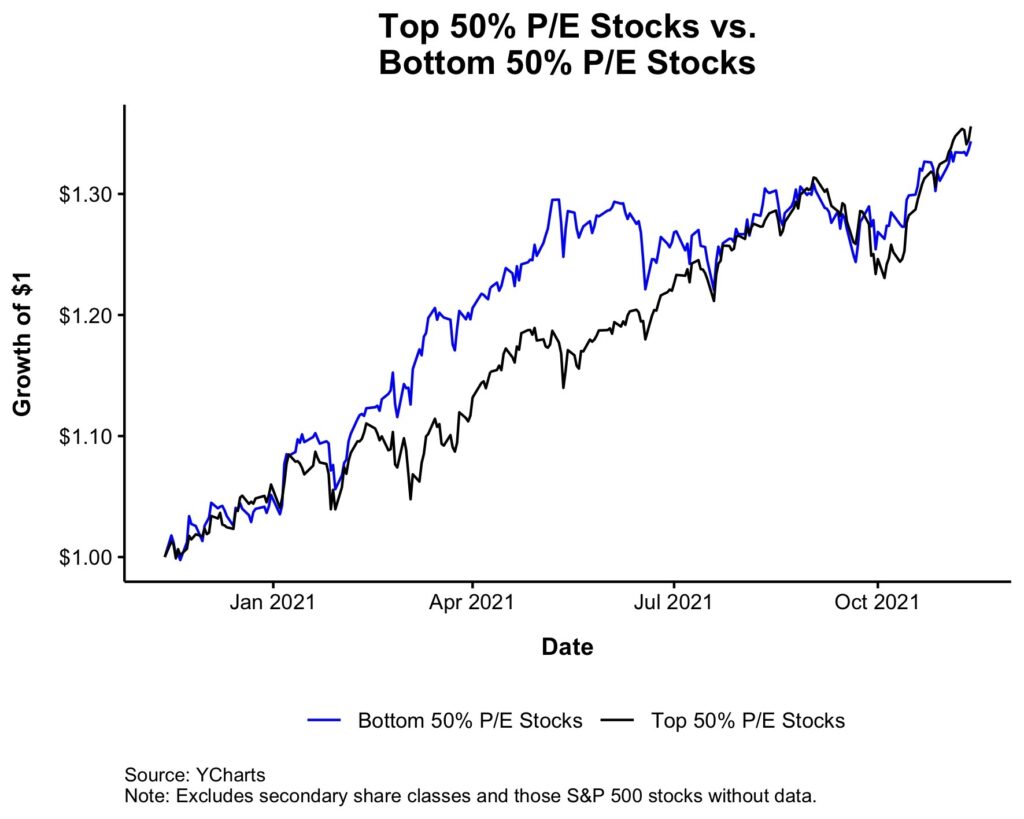 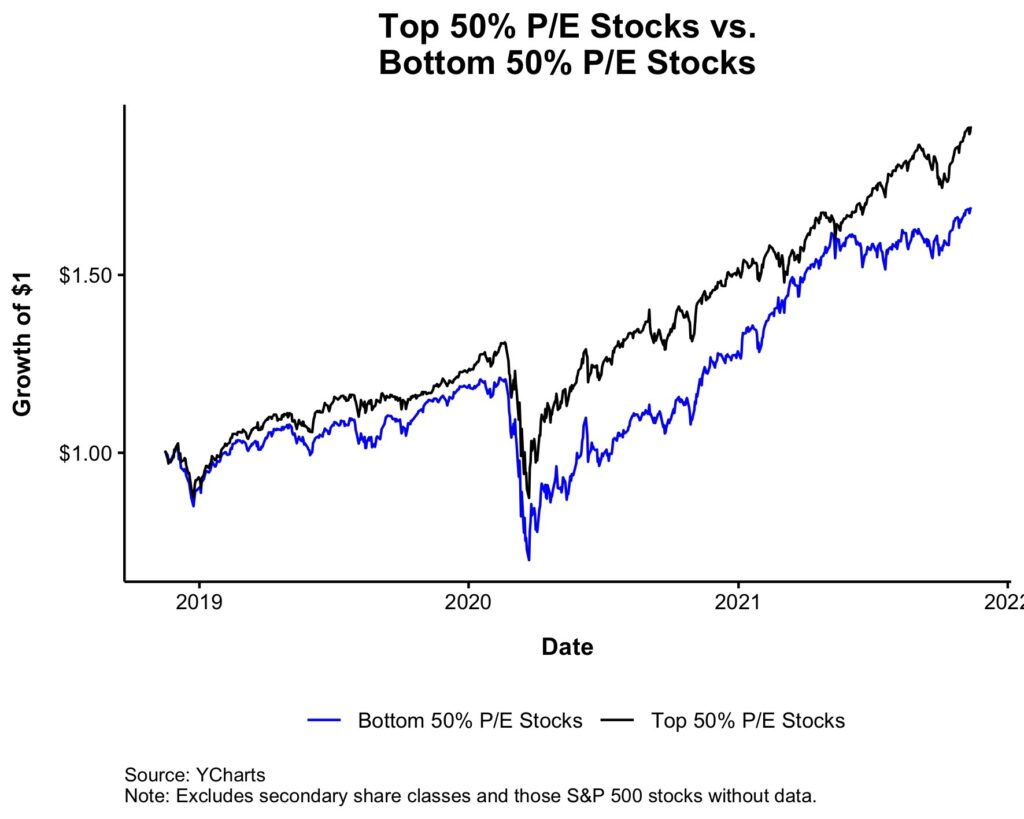 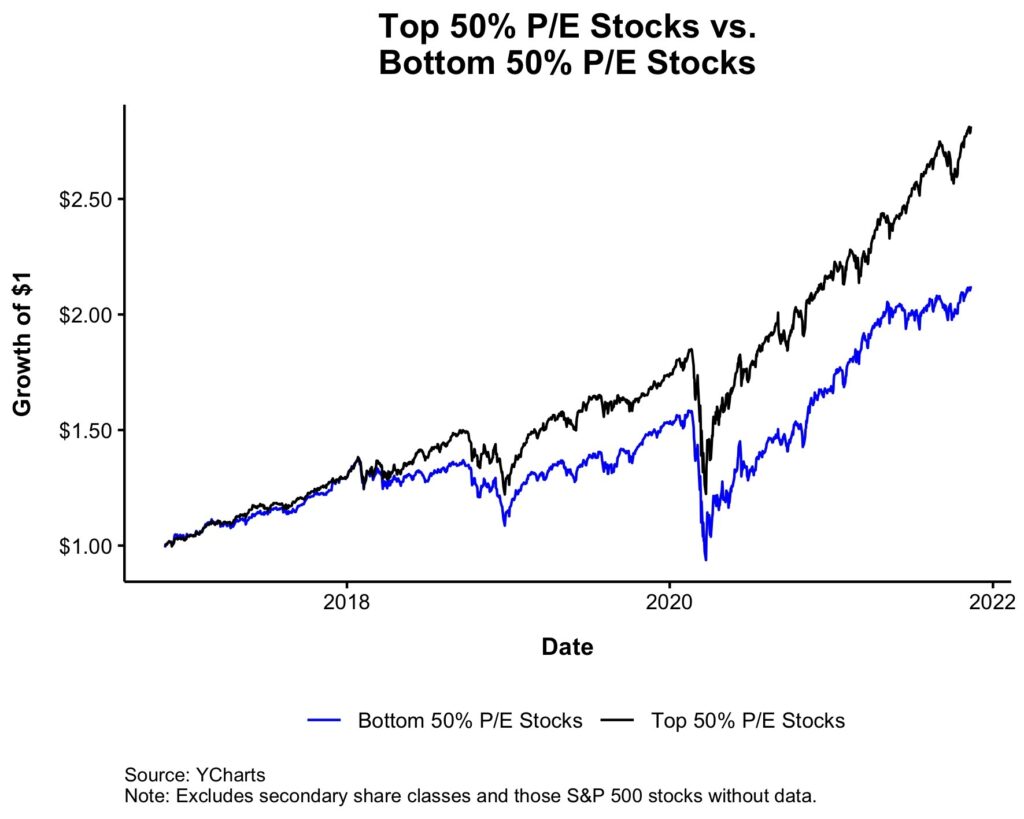 In fact, the further you go back, the more an orientation toward “inexpensive” stocks has actually hurt your performance relative to either a growth-tilted portfolio or a regular market-cap weighted one. Which, paradoxically and only with the benefit of hindsight, makes the allegedly inexpensive stocks look to have been quite expensive after all.

I asked Nick Maggiulli to take this way of thinking about recent markets to more of an extreme. Let’s see what happens if we compare the cheapest 20% of stocks on that same trailing twelve months PE ratio at the starting point versus the most expensive 20%…

The bottom quintile in terms of PE ratio did actually add a slight outperformance benefit this year, likely owing to the resurgence of oil and bank stocks that began over the summer. Unfortunately, as you go back and look at the 3 year or the 5 year chart, this year’s slight benefit dissolves like a teaspoon of sugar. By the time you go back to the view from 2016, you’re looking at a greater than 50% performance deficit for the bottom quintile by PE versus the most expensive stocks in the index. 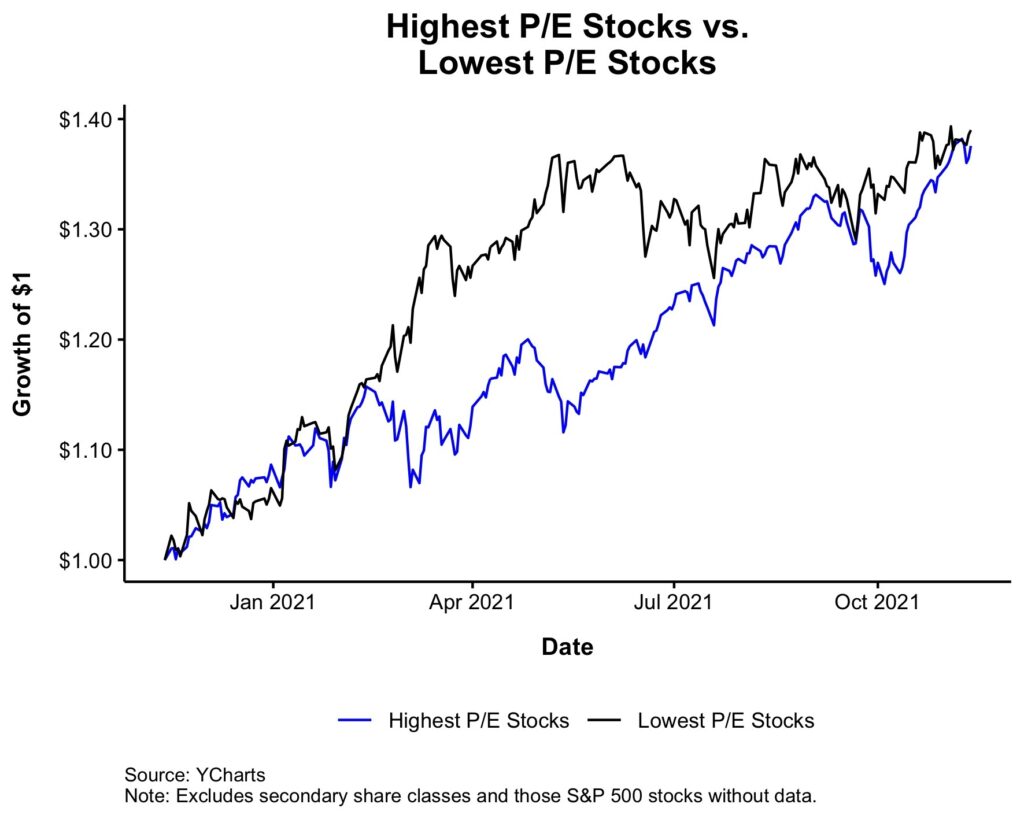 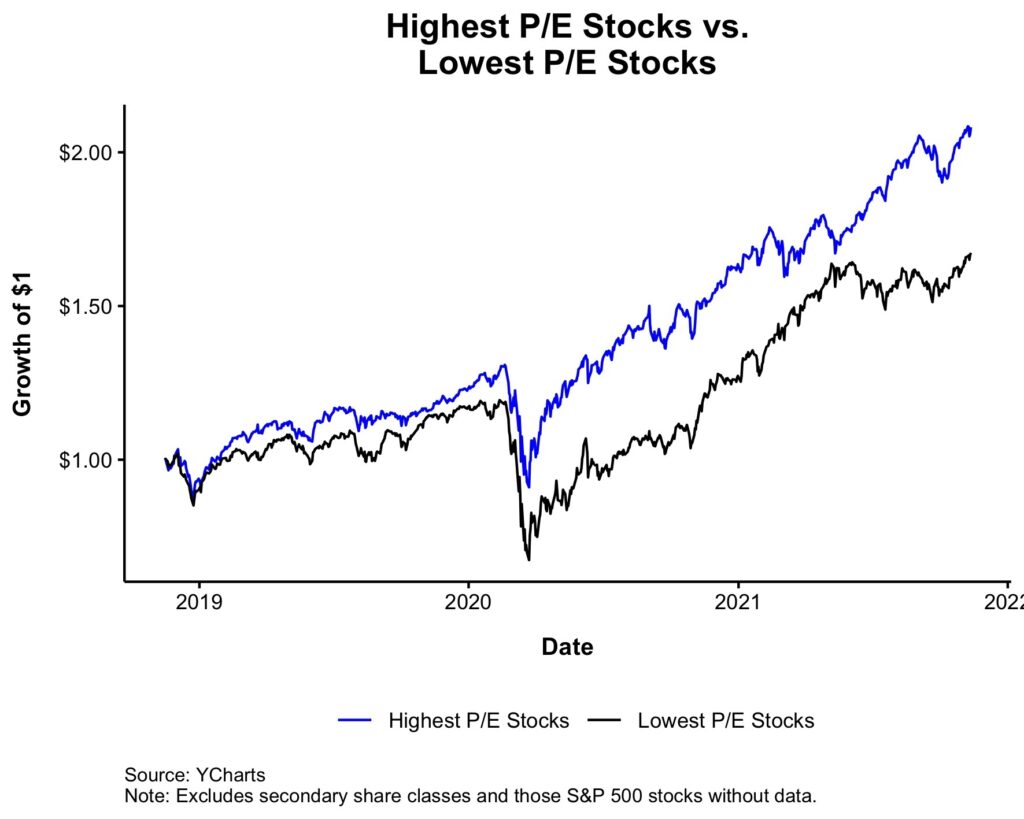 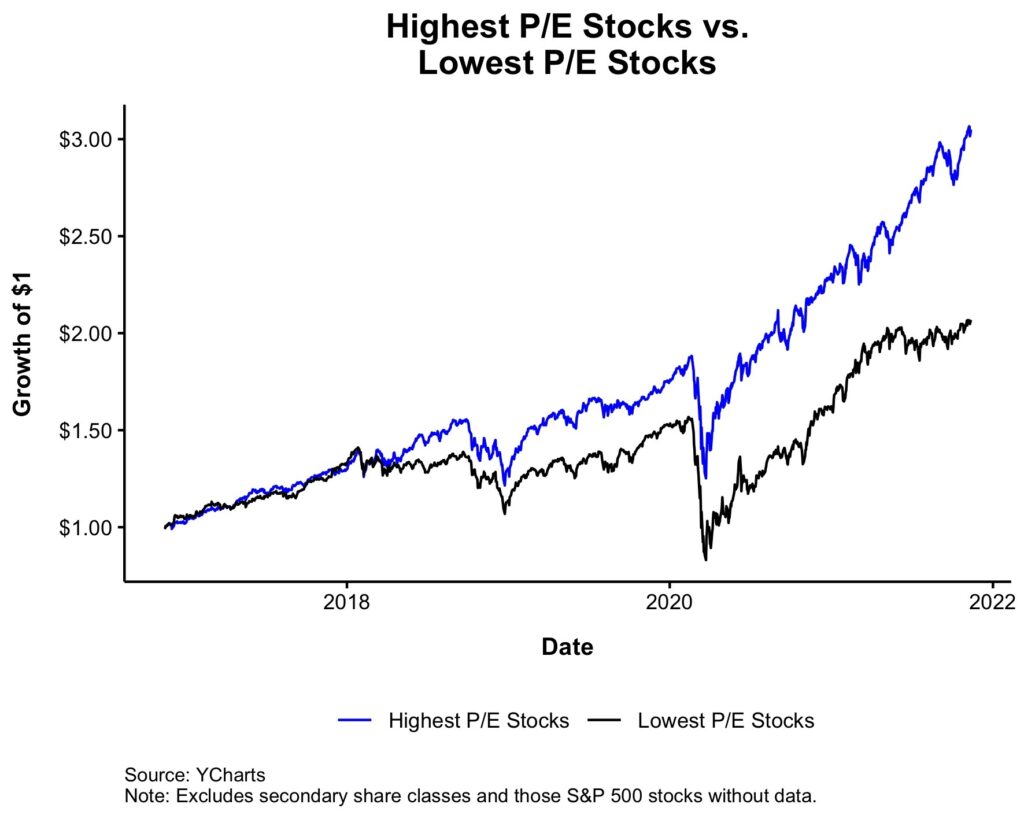 The takeaway here is not to ignore valuation or pretend that any price you pay for a security is as good as any other. I don’t believe that and I don’t ever say things that sound anything like that.

But I don’t have a problem saying the following:

Guessing in advance which characteristics of stocks people will select for is every bit as hard as reading people’s minds about anything else. The crowd will do what the crowd wants to do, and buy what the crowd wants to buy, and for whatever mercurial reason the crowd coalesces around. And, despite what all your text books and screens and “discipline” tell you, it will be unpredictable. It will change from one season to the next, without warning or logic or reason. And just when you think you’ve got the key to the market, they change the locks. Get used to it.

I would also point out that there’s nothing you can do about it, which should ease your mind a bit and take some of the pressure off.

And if 2022’s market happens to favor your particular discipline as opposed to the highly favored growth trade of today, then congratulations. The wheel of fortune turned and your team got their time on the top of the ride while others were submerged beneath the water line. Stick around long enough and these regime shifts will almost feel comforting, even the ones that unceremoniously plunge your strategy into the icy depths. Because you’ll remember how quickly that wheel can turn once again.

In the modern era, not only does value not matter – in fact, it’s actually been one of the worst possible things you could have selected for (lower market cap size is probably running neck and neck for this honor). Temper tantrums won’t change that. It’s just the environment we’ve been given. Let’s see what happens from here.