Don’t say because it’s worthless, it’s clearly worth over a trillion US dollars to lots and lots of people. They may change their minds, but right now, it’s worth what it’s worth. Remember what I said in February: “That sounds stupid, I’m buying some just in case…” is still the vibez.

Don’t say it’s overvalued, because, LOL, based on what? Have you a metric, ratio, formula, rule of thumb, yardstick, comparable or incantation that’s been demonstrably helpful at valuing this instrument in the past or present? I f***ing bet you don’t! You might pretend you do in front of other people, but I know what you say to yourself in your own head once you go home for the day. I am a professional pundit, don’t even try to convince me otherwise. I know what you say about your “models” and all the nonsensical variables that go into them. And then I know what you say to yourself in the shower. The two things don’t match up.  Here’s how JC Parets describes using the CNN Fear and Greed Indicator – and its seven non sequitur inputs – to predict the stock market:

Of the 7, I’d argue maybe 2 of them make sense to include in a sentiment composite.

The other 5 are different tools and data sets for completely different purposes.

This is like a Pitcher trying to figure out which pitch to throw a hitter by looking at the color of his shoe laces. Or by choosing your vegetables at the store using the expiration dates in the milk aisle.

What does one have to do with the other?

Here’s my chart of Bitcoin’s price versus the unemployment rate in Holland, apropos of absolutely nothing at all. Show me where on this chart to buy and where to sell: 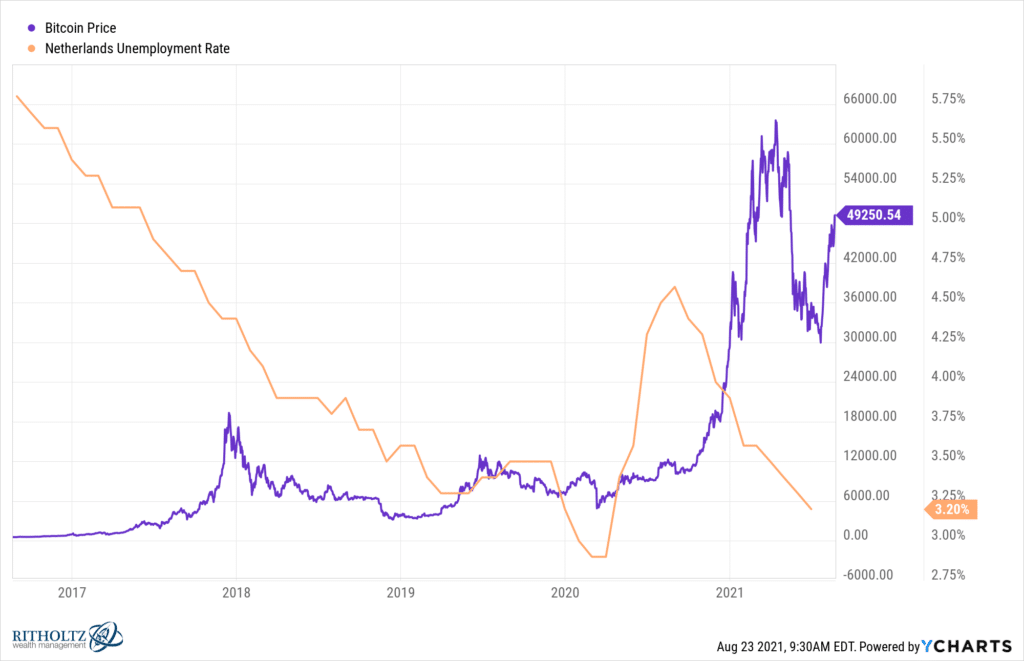 What’s in your silly little equation to determine the price of an asset that trades based on Twitter thought leadership and podcast proselytizing? Bet you won’t share it. “It’s proprietary.” Good call. I wouldn’t commit to it either. Not out loud!

Don’t say it can’t get there because there isn’t enough interest. Walmart just posted a job position for a head of digital currency strategy. Walmart. Where they still sell country music CDs. I’m not even joking – you can walk into a Walmart right now and find a Travis Tritt disc in the front of the store. You can find a Morgan Wallen CD at the back of the store, in a discount rack. And soon, you’ll be able to buy groceries and gas with Visa, MasterCard, American Express, Square, Paypal, Venmo, Bitcoin, Ether, Diem, digital USD and whatever stablecoin Walmart invents to serve as the reservoir of digital funds its customers dip in and out of each day. SamCoin? How many SamCoins to buy the entire discography of Randy Travis? I have big road trip coming up. The only part Walmart will have trouble with is luring the crypto punks they’ll need to come work out of Arkansas. Or at least report there once in awhile. How’s the WiFi in Bentonville? How’s the kimchi and what do they do for Pride Month? JPMorgan is now allowing its wealth managers to incorporate crypto into the portfolios they build for retail clients. That’s quite a reversal from the Chairman and CEO calling it a “fraud” that governments “would crush” two years ago. You cannot afford to be a 21st century financial services institution and have that as your answer to crypto questions.

Don’t say it can’t get there because there are too many sellers. Bitcoin is one of the rare investable instruments that is seemingly a better investment the higher it goes. Do you know what a Veblen good is? Veblen was a brilliant and slightly unhinged economist who figured this out: “A Veblen good is a good for which demand increases as the price increases, because of its exclusive nature and appeal as a status symbol. A Veblen good has an upward-sloping demand curve, which runs counter to the typical downward-sloping curve…Most often, when the price of a Veblen good goes up, the demand goes up; when the price of a Veblen good goes down, the demand goes down.” The larger Bitcoin becomes, the more powerful people become entrenched in its continued success. Once above $250 billion in assets it became impossible to kill. Once above $500 billion in assets, Treasury, Federal Reserve, IRS and SEC were forced to address it officially. Once above a trillion and you basically need to own some just to be able to go on with your life. Will the upcoming taper of monetary stimulus change the appetite for long-duration securities without current cashflows? I don’t know, is Europe done with stimulus? Japan? China? Aren’t we just on an eternal global stimulus merry-go-round where some country, somewhere, is always stimulating something? “Okay, we’re tapering, your turn to buy!”

Don’t say Bitcoin can’t go to $100,000 because it’s unimaginable or you can’t picture it. We just saw the stock market enjoy the fastest double in history (16 months) and the price of oil in the spot market go to below zero. Forget what you can picture. We are at the place on the map where they ran out of names or recognizable features so they just started drawing dragons and giant squids and shit. You’re in the scene from Time Bandits where they’ve run through all the conventional historical settings and are now in a realm of legends, monsters and fantasy. There are no longer any rules, reason, rational behavior or logic governing anything. Bill Miller’s bull thesis requires no imagination at all, just a simple truth: “Supply of Bitcoin is growing 2% a year – is demand growing faster or slower than 2%?” If the answer is faster, the price will remain on an upward trajectory, even accounting for massive volatility along the way. You can scoff at Bill Miller but he’s sitting on a billion dollar-plus pile of Bitcoin that he began buying in 2014 at $350 per share.

Don’t say it’s because that’s too much money for an unproven, unnecessary technology. I invested in Instacart shares on the private market at a sub-$8 billion valuation last year. This year the company is rumored to be in talks with DoorDash to sell at a $40 or $50 billion valuation. Make it $90 billion, what’s the difference? Who would even bat an eyelash anymore? Who’s even doing the math? Softbank is still out there operating like it’s 2019, pre-WeWork. You know why? Because they can. There is a wall of dumb money coming in behind them no matter what they buy or how much they pay for it. You know it. They know it. Everyone knows it. The game is “Say yes to everything, eventually someone even thirstier will pay more.” I’ll let you know when that stops working. There are VCs writing checks to entrepreneurs right now just for the networking opportunities. “At least I’ll meet some people.” You can do that when eight out of ten investments get an exit. Eight out of ten investments can get an exit when there are 600 SPACs, 500 IPOs and an open spigot of capital racing to find a return (any return) in a negative interest rate world. Don’t think too much about it. And saying yes to everyone is actually a smart strategy when you consider that the single biggest determinant of whether or not a startup will be a good investment is who else is in it. The rounds are being raised so fast you can’t actually do any due diligence. The only question is “Are Point72 or A16Z in?” They usually are.

Don’t say it can’t because it shouldn’t, or because the holders of crypto don’t deserve the gains that $100,000 would bring. Lots of things that “shouldn’t happen” happen all the time. Every day. Lots of people who are unworthy of good fortune spend their lifetimes basking in an uninterrupted wellspring of it. “They’re so stupid, they don’t even understand what they’re buying.” I know it’s frustrating to watch. But remember, the first people sinking money into petroleum projects 100 years ago and other mineral-related investments didn’t really know what they were buying either. And despite their ignorance, made tons of money. There were Native American tribes in Oklahoma that woke up one day in the early 1900’s to fortunes beyond their wildest dreams simply due to a geological situation beneath their feet that no one could have planned for or pictured in advance. Underserving people become filthy rich all the time just as highly intelligent people go broke. If your investment thesis is based on a sneering personal dislike of a given group of people then you don’t actually have one. Ask the Ivy League lacrosse guys who stayed short AMC this summer.

And finally, don’t say it can’t happen because the “they” will stop it from happening. There is no “they” anymore. Trump did (and still does) whatever he wants. Musk became the richest man on earth while taunting the entire auto industry, securities regulatory community and anyone else who dared to suggest the rules applied to him. He had an army of shareholders to get him past any attempt to bring him to heel just as Trump had an army of popular support that only loved him more every time he spat at the norms and trampled on the rules. We’re in a mob rule era. “They” have been replaced with “Us”. The mob doesn’t respect expertise (look at Dr. Fauci’s approval ratings) or arguments from authority anymore (CDC, LMAO, might as well be the Paw Patrol telling us what to do). The mob doesn’t care if you say Bitcoin is money or digital gold or a trade or an investment or a store of value or a fad or a scam. Just like the mob didn’t care about Tesla’s accounting or Trump’s statesmanship. The mob is going to do what feels good and right now what feels good is buying and evangelizing crypto coins to our friends and neighbors. It simultaneously makes us wealthier and feel smarter all at once – an absolutely lethally irresistible cocktail of serotonin, dopamine, oxytocin and endorphins. Men are more susceptible than women, and men are capable of significantly higher levels of unfounded confidence in their investment behavior – which is how $75,000 BTC makes even more sense than $65,000 BTC, while buying at $85,000 is even more of a sure thing. Bitcoin is Veblen AF. Laser eyes in the avatars is the only proof of that you’ll need.

So if no one can stop it, and the valuation doesn’t matter, and the limits of your imagination are no longer relevant, and there are way more potential buyers than potential sellers – then why wouldn’t it go to $100,000? Can you think of a reason for why it can’t, other than the fact you don’t want it to? I can’t think of any reason whatsoever.