I know I was supposed to be hanging on every word from Warren Buffett and Charlie Munger on Saturday as the Berkshire Hathaway annual shareholders meeting was live broadcast on Yahoo Finance.

Warren and Charlie are two idols of mine. I appreciate everything they’ve done and taught to the investor class over decades of success. But they are now 90 and 97 years old respectively and they don’t seem to be curious or interested in the largest trends driving the markets anymore. I think they were probably more curious about the birth of the internet 25 years ago than they seem to be today, now that the internet has given rise to the largest corporations (and market capitalizations) in human history. They don’t seem to want to learn or understand more about Web3, the decentralization wave, digital assets, distributive computing, autonomous and electric vehicles, AI, machine learning, virtual reality, app-based gaming, quantum computing or any of the other things that are shaping our lives today and gradually taking over from the 20th Century technologies that came before. Buffett says he’ll be reading the Robinhood S-1, so he’s definitely aware of what’s going on…

I once thought the idea of Warren Buffett sitting behind his desk doing deals all day without a computer was charming. I don’t feel that way anymore.

Warren Buffett is the greatest investor in history. But I don’t think his (or Charlie Munger’s) takes on the state of the markets are crucial to listen to now. I’m not sure if these takes are doing more harm than good at this point. I never thought I would be saying this out loud. Trillions of dollars in value are being created out of thin air for people who aren’t paying any attention to what Charlie Munger is referring to as shameful, disgusting, etc. Charlie doubled down on his Bitcoin disgust while Warren thought better of it and chose not to say anything at all this time out.

This isn’t another blog post saying “Old men don’t get it” because that’s as big a cliché as being an old man and not getting it. I think what I’m actually trying to say is that this is worse – Warren and Charlie seem to actively and deliberately not want to get it.

What’s ironic is that one of Warren Buffett’s biggest winners ever is American Express, a company that was a fintech disruptor more than fifty years ago.

Up until Buffett had met Charlie Munger in 1959, he was primarily engaged in buying “cigar butts” – these were shitty stocks in shitty companies that were too cheap to be left lying there in the gutter. You could pick up some shares of these companies almost for free and take the last puff. Munger began to convince Buffett that there was a better approach to investing. Munger’s idea was that Buffett would be much more successful if, instead of seeking out garbage companies at rock-bottom prices, he began looking for great companies at fair prices. When Buffett began buying into American Express in 1964, the investment would revolutionize his entire approach. Amex was a great company at a fair price, as innovative and cutting edge a financial firm as you could find back then.

Berkshire Hathaway continued to add to its American Express position and by the mid-1990’s they had amassed a 10% ownership stake, an initial outlay of $1.29 billion in cash. That investment has grown into a 19% stake in the company worth approximately $18.3 billion, a return of more than 1,300%. American Express invented a category out of thin air. Its only competitor, the cardboard Diners Club card, would eventually fade away while Amex invented the plastic card that would become an industry standard. This investment taught the younger Buffett some life-changing lessons about the power of brand (the image of a Roman Centurion on the card conveyed prestige and exclusivity) and the advantages of a membership business model with recurring revenue. These lessons were probably highly influential during the deliberations that would take place about a decade ago as Berkshire decided to amass its enormous stake in Apple.

I’m not saying the comparison is perfect, but Coinbase probably has more similarities to American Express and some of Berkshire’s biggest long-term winners than Buffett and Munger would like to acknowledge. But it would appear as though they’re not even trying to understand. People who are listening to and heeding their off the cuff remarks have so far missed out on a trillion-dollar asset class coming to life right before their own eyes. At a certain point, it’s probably best for the skeptics to just quietly accept the idea that decentralized finance is not going away. Jamie Dimon seems to have done this, avoiding a topic he once scoffed at as America’s largest bank builds out a latticework of connections between its traditional architecture and the various blockchains that now encroach like ivy. JPMorgan will join all of its competitors in launching asset management products, payment solutions, trading support and custody services for digital assets while the US Federal Reserve begins testing a digital version of its own dollar bill. For more on Wall Street’s (cynical) adoption of Bitcoin and crypto, the best thing I’ve read is by Ben Hunt at Epsilon Theory.

So I read some of the coverage of the event that pulled out the highlights and takeaways. I got all the soundbites and bon mots. Not bad. Better than last year. But if you heard none of it you probably didn’t miss anything. Even if, like me, you are a BRK shareholder, which I am proud to be. I don’t think we can rely on this annual meeting to tell us anything important about what’s happening in the world of investing or Corporate America anymore. There’s nothing awe-inspiring about an investment company that spends a decade with the bat on its shoulders while $145 billion in cash piles up and no one can think of what to do with it.

So instead I spent the weekend listening to Sorry Not Sorry, the new Jay-Z and Nas track that dropped on Friday when DJ Khaled released his new album, ‘Khaled Khaled’ – a pandemic-era compilation featuring the hottest artists in music today. It’s hard to tell which singers and rappers actually trekked down to see the producer at his Miami compound during the past year and which ones simply emailed their vocal tracks in for inclusion on the record. We know Jay and Nas showed up because we got a video out of it. See below.

But they’ve also been very busy during Pandemic Times. 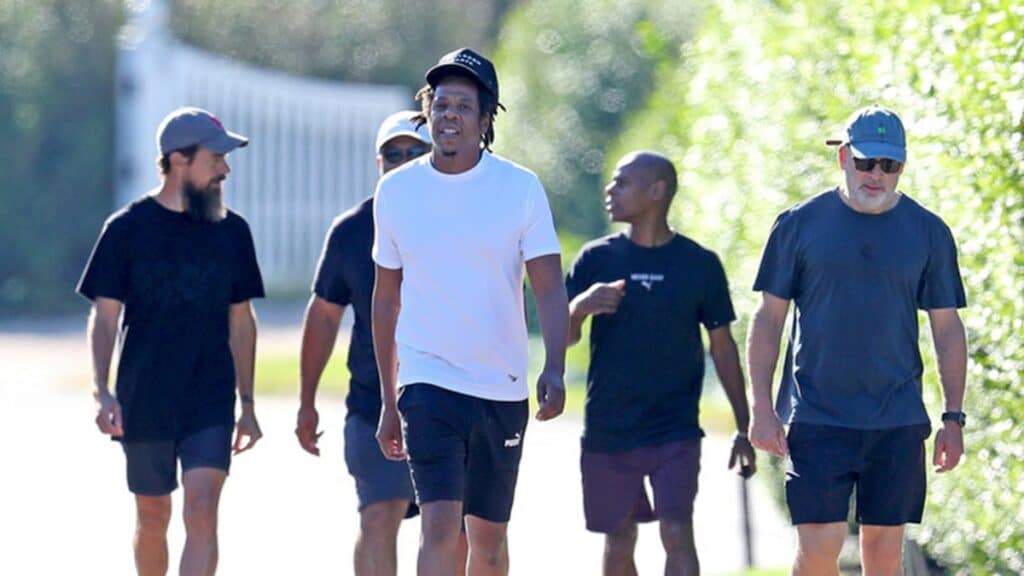 They’ve been doing business in the world as it is today. On Sorry Not Sorry, Jay-Z and Nas spend almost four and a half minutes explaining all of the angel investing they’re up to. Hip hop heads may sneer but what else do you want them to talk about, selling crack? They’re fifty year old billionaire businessmen.

Jay-Z just finished selling Tidal for the second time – this time getting hundreds of millions dollars from Square and Twitter’s Jack Dorsey.

Rapper and billionaire mogul Jay-Z has been on a roll lately striking deals left and right that are adding cash to his bank accounts. He’s made two enormous deals in two weeks – he’s selling a majority stake in his music streaming company Tidal to Square for $297 million, which values the company at $450 million. He made $149 million in cash and stock and was made a board member when he bought 33% of Tidal back from T-Mobile just days before selling that plus the 33% he already owned to Jack Dorsey’s mobile payment company. Jay-Z still owns a small stake in the company.

This deal came on the heels of the one where he sold half of his stake in his champagne brand Armand de Brignac to Bernard Arnault’s LVMH in a deal that valued the champagne brand at $640 million. Jay-Z retained 50% ownership of his luxury champagne brand. Combined, the two deals added about $400 million to his net worth.

Jay-Z is now an actual billionaire, every bit as self-made as Warren Buffett. In fact, much more so. Buffett’s dad was a bond salesman, trader, investor and eventually a Representative for the state of Nebraska in Congress. God knows what Jay-Z’s dad sold.

Jay opens his verse on the Khaled track with:

Sorry, that’s another B
Haters still ain’t recover from the other B
Mm, that’s a double B
Nah, that’s a triple B, can’t forget ’bout the other Bey (Hey)

B’s are billions and I don’t have to tell you what a Bey is. And then there’s this:

Everybody’s been gettin’ bands if they’ve been openminded and curious, thinking more about the possibilities of the future than the conventions of the past.

And then there’s Nas, who’s parlayed a friendship with venture capitalist Ben Horowitz into a Coinbase stake potentially worth $100 million for his QueensBridge Venture Partners fund – well, he mostly wanted to talk about venture investing on the track as well…

Nas invested in a Coinbase round back in 2013 when the company was raising $25 million at a valuation of $143 million. Coinbase and crypto were far from a sure thing when Nas’s fund bought in. His fund was also early to Lyft, Dropbox and Robinhood, so to dismiss this windfall as a case of getting lucky would be extremely disrepectful. The rappers and NBA players getting money in Silicon Valley are using the talents and gifts they have – popularity and cultural caché – to get themselves seats at the table. How do you think everyone else got their seats there? Not every venture investor has the history of inventiveness that Mark Andreessen does. Thousands of people feeding off of that ecosystem simply met the right people during undergrad at Stanford and let destiny take the wheel. From that perspective, Nas and Kevin Durant deserve more credit for their wins, not less.

So, yes, this weekend I listened to a lot more Nas and Jay-Z than I did Buffett and Munger. I don’t think I’ll be any worse off as an investor in the 21st Century, do you?