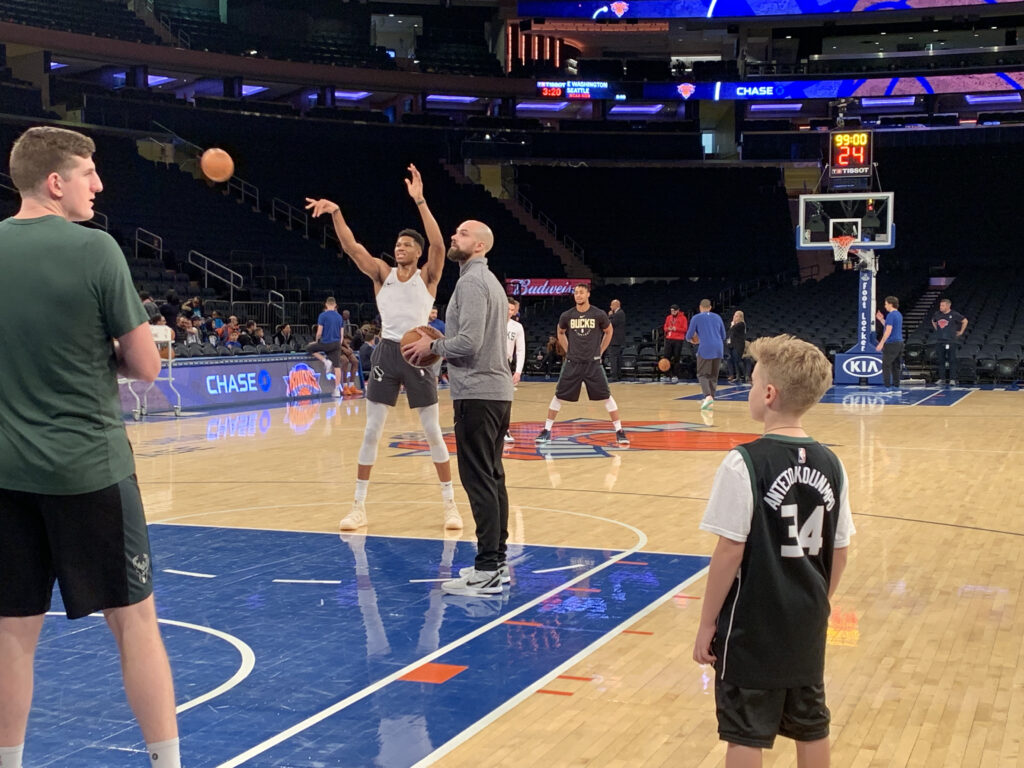 Let’s say the Milwaukee Bucks owners had agreed to a new contract extension with Giannis to keep him for the next twenty years at a total price tag of $1 billion. Basketball people probably would have flipped the f*** out. “He’s only got ten productive years left in his career! What if he gets injured? What if we can’t sign any other star players under the cap?” they would scream. “He’s not worth that!”

Well, in this case, Giannis Antetokounmpo is the seller and Milwaukee is the buyer. And that’s what they decided his labor and presence and star power is worth, on and off the court, to the organization. Offers or potential offers from other teams may have factored into that price, but that is what the price is. You have the right to disagree with either the team or the player and think one of them got a vastly better (or worse) deal, but what you cannot change is the fact of the price. It is the verdict of the buyer(s) and seller(s).

*Yes, that’s my little boy on the court with the Bucks as Giannis works on his free throw a couple years ago. I already told him this is my high watermark as a dad, I doubt I’ll ever be able to top this moment :0

I think about this concept a lot these days as I watch the valuations of various stocks and asset classes zoom to unheard of heights amidst the current Everything Bubble. Everyone seems to have a strong opinion about how this or that thing isn’t worth what others are buying and selling it for. I have some of my own. And that’s natural. So long as we all remember that a thing is worth precisely what its buyers and sellers tacitly agree it’s worth every time they transact.

Here’s Nick Maggiulli on changing his mind about Bitcoin, which is worth what its buyers and sellers say it’s worth – not a penny more or less based on any sort of formula, historical precedent or Old Testament-style slate of laws:

The problem with arguing that Bitcoin is “going to zero” is that there are too many investors who are willing to buy it at a price far above $0.  I remember speaking to many non-crypto investors before the recent run up in price who said they wouldn’t buy Bitcoin at $10,000, but if it dropped to $1,000-$2,000 they would surely jump in.

Well guess what?  Now that the current price is above $30,000, some of those investors have likely increased the limit at which they would consider buying Bitcoin.  Instead of buying at $1,000 these same investors may be happy to jump in closer to $10,000.  And every time the price goes up in the future, these “mental buy limits” go up as well, increasing the likelihood of Bitcoin’s future survival.

“But Nick, Bitcoin doesn’t have any intrinsic value!”  Well, guess what?  Neither does gold which has a $10 trillion market capitalization!  So if you want to argue against Bitcoin on intrinsic value terms, then you have to argue against gold too.  Because both the price of gold and the price Bitcoin are based around one thing and one thing alone—belief.  The belief that these assets will have value in the future.

Josh here – “mental buy limits” is such a key concept. This is no different than when sell-side analysts at Wall Street’s most prestigious firms raise their price targets to chase the share price of a stock despite having nothing new to say about that stock’s earnings prospects. All they’re doing is catching up to the beliefs of the shareholders. “We’re raising our year-end price target to 80 from 40, but we remain neutral.” Okay. The stock is currently at 86, so thanks for that.

Tesla shareholders have believed, for a decade, that Tesla shares would be worth significantly more in the future than they were at the time of purchase. They have been right. And the main reason that they have been right is that with every passing year, more of them have shared in this belief and they’ve grown emboldened by the growth of this belief among their peers. There are newcomers to the belief and old adherents to the belief who have increased in confidence about it.

It doesn’t take more than this for an asset to grow in value. Throw the calculators and textbooks out, they won’t be helpful here. This phenomenon can also work in reverse. Beliefs drive prices, fundamentals are only a part of the equation. In the case of Bitcoin (or gold), there need not even be any fundamentals whatsoever. In fact, better off if there aren’t. Then you can trade purely – absolutely – on dreams and feelings.

You can dislike that it works this way. You can say that it shouldn’t. You can stomp your feet and scream at strangers on the street, but that won’t change anything either.