Pay attention when you hear the technicians start talking about a “breadth thrust” underway. It’s often the signal that markets are leaving a consolidation and breaking out into a new bull market. Not always, but what we saw in the spring of 2013 was breathtaking. It was the moment we broke out of the secular bear market of 2000-2013 and into the current secular bull market, which has now been underway for six and half years.

We’ve been consolidating in the broad stock market averages since January 2018, so almost three full years now. Pull out the big QQQ names and you can really see the stagnation. The announcement of the vaccine data has changed this. These announcements acted as a massive deus ex machina for thousands of stocks, as we thought it might.

The percentage of NYSE stocks above their 200-day average peaked at 82% last week, its highest tally since May 2013. We see this as a high-conviction signal of broad-based participation that leads us to expect additional S&P 500 gains. Our work shows that the S&P typically posts stronger returns when there’s more stocks participating, and as a leading indicator, participation usually peaks ahead of the market. For instance, the S&P rallied another 45% between the 2013 breadth surge and 2015 price peak, and another 35% between the 2016 breadth surge and 2018 price peak. Since 1994, the highest count recorded was 94% in Sept. 2009. Our concerns about a market top will intensify when a new S&P high is undermined by fewer than 60% participation—we think this could still be 12+ months away.

OK, he calls it a breadth surge. Marty Zweig called it a thrust. Either way it’s bullish af. An expanding 52 week high list, an increasing number of stocks in technically deigned uptrends (ie: trading above their 200-day MAs, etc) at or near record highs in the index price level is what you want.

Here’s Ari’s chart showing that breadth thrusts in the internals do not occur concurrently with market tops, they precede them (some would even say foreshadow them) by at least a year on average: 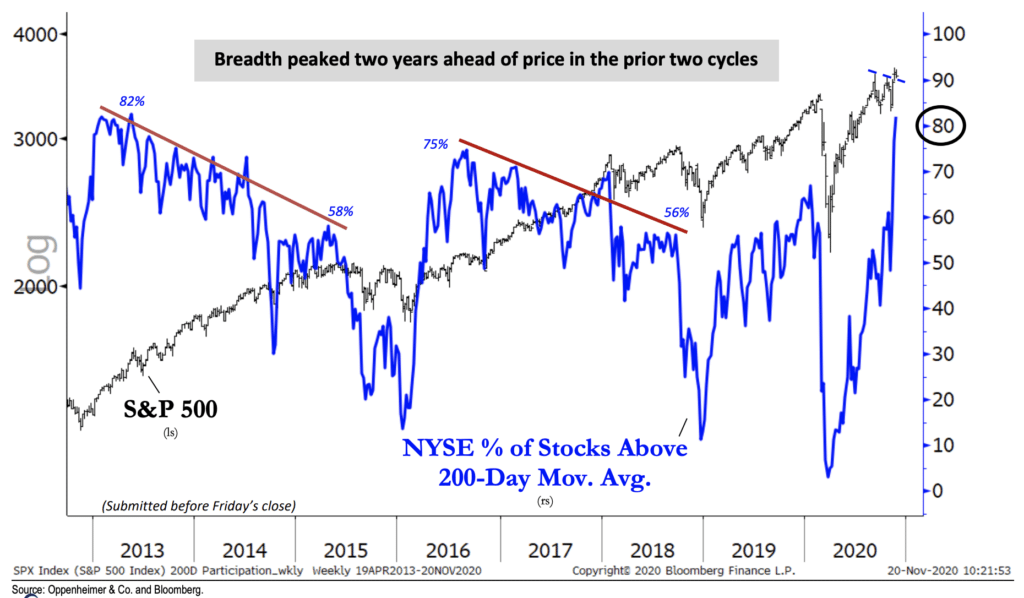