Euripides gets a bad wrap.

Critics have been busting his chops since at least 431 BC, when he debuted his play Medea. He wraps up the conflicts in his plays by having an actor lowered down to the stage via crane or lever, portraying one of the many gods in the ancient Greek pantheon. The god comes down (or, if it’s Hades, comes up through a trap door) and waves away all of the characters’ problems and angst and confusion with a single pronouncement.

“It is I, Athena! Allow me to explain everything and tie up all loose ends!”

Sophocles did this bullshit too.

Lowering a god to the stage to magically save the day is an insult to the audience’s intelligence. But when most of the audience isn’t all that intelligent to begin with, the playwright gets away with it. Most people just want to leave the theater smiling. 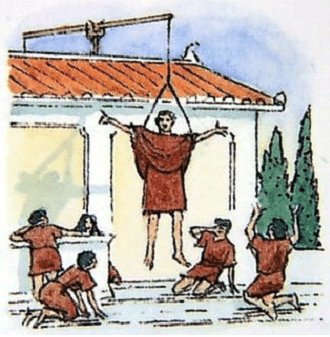 Imagine if Gilligan’s Island had ended with Poseidon pushing a steamship to the beach to rescue the castaways, as opposed to the way I think it ended, with the Skipper eating everyone, picking their carcasses clean as he slowly goes insane from the loneliness.

But upon further inspection of the works of Euripides, it becomes apparent that, with one or two exceptions, most of his plots were not necessarily saved by these deus ex machina (literally, God from the Machine) endings. The plots were wound up already and then the god merely shows up to provide a coda of sorts. The more modern explanation for the way the ancient Greeks employed this device is to forgive them their need to tie the dramatic world into the general enthusiasm for religion and the spiritual world. The Greeks loved and revered their gods so including them in the entertainment of the day was a way of satisfying the audience as opposed to merely fixing a lazy third act.

The coronavirus vaccine is the deus ex machina everyone knows is waiting in the wings. And in this case, it is a resolution. We don’t know yet if it arrives at Dow 27,000 or Dow 24,000 but we do know that it resolves the central conflict within the play that is our current economic situation. We know that it changes the course of everything that matters. There are entire industries and millions (MILLIONS) of businesses that do not recover until this god is sprung from the rafters and descends upon the stage.

Trillions of dollars worth of commerce and investment and trade around the world depend upon this plot device. How many jobs and businesses can survive until we get to this scene? How much of the audience can remain on its feet as we wait, and wait, and wait some more? How many down-1,000 Dow point days can it endure?

Apollo, we await the contrivance of your entry.