Taking a look a the S&P 500 versus the Vix, which is a measure of expected volatility that incorporates the buying and selling of out-of-the-money puts and calls – I’m overgeneralizing but it’s a look at how much hedging is going on in the options market. 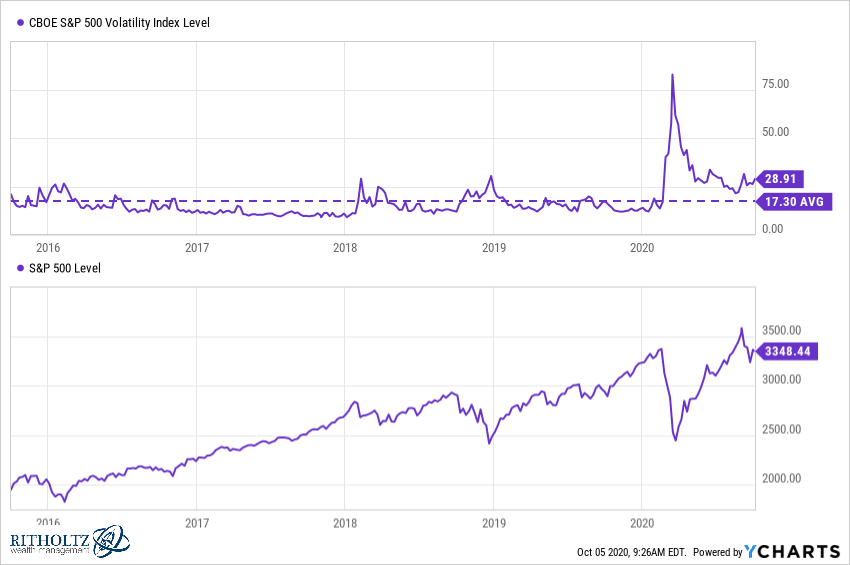 Anyway, the S&P 500 (lower pane) has regained what it lost since February. But the Vix remains substantially elevated, After hitting a high of over 80 in mid-March during the crash, it’s moderated quite a bit, but we’re still nowhere near the average levels of the 2019 environment. In fact, Vix is over 40% higher than it was the last time the stock market had achieved this price level. Vix has averaged 17 over the last five years, which is inclusive of the 2016 election period. If you were to pull out the pandemic crash, that number would much lower. We’re hovering in the high twenties today and, if anything, it looks as though volatility is ready to take a new leg higher.

There is an asymmetry involved when looking at returns and risk. Measures of volatility don’t always match up well with the direction of the stock market. Sometimes stocks and volatility rise together, which is why using volatility as a short-term trading signal is never a slam dunk.

A lot of this elevation in vol has to do with the coming election. There’s lots of hedging activity as market participants go into November 3rd knowing in advance that we’ll have a period of non-clarity about who the next President will be. And then, of course, there is the pandemic itself, which has shown itself to be very much interested in sticking around this winter.

The all-time low for the Vix in recent history was way back in the fall of 2017, as US stocks were coasting toward a plus-30% year, economies around the world were in an environment of “globally synchronized growth”, the trade war with China was just a talking point at rallies and a massive tax cut was on its way. The Vix hit a low of 9 that November – it got to the point where Wall Street was complaining about the lack of vol and citing it to explain their meager trading profits during quarterly conference calls. Most people, at that time, would not have told you that we were living in the Good Old Days. But looking back from the distance of just a few years, it’s clear that, in many respects, we were.