Last week, the United States sent checks for $600 to approximately 25 million unemployed people. This amount effectively triples the average $350 per-week unemployment check from the states. As I argued in my new podcast episode this week (thank you for all the feedback and downloads, much appreciated!) distributing this money, at a cost of roughly $15 billion per week, has been one of the most crucial and effective things we’ve done to combat the pandemic recession.

And now there could be an abrupt end to this federal aid to unemployed Americans at the end of this month. There shouldn’t be. We can do better.

Researchers at the University of Chicago estimated that 68% of unemployed people are currently earning more money on assistance than they made working at their previous jobs. There are anecdotes all over the press about business owners who are having trouble hiring people because the potential pool of workers would rather collect the increased checks and do nothing. I’m sure this exists. I doubt it’s as widespread as some media accounts make it out to be. I believe that Americans fundamentally and overwhelmingly would prefer to work if given the choice.

The simple fact is millions of people simply do not have that choice. There were 3.9 unemployed people for every job opening in the month of May. That’s up for .8 unemployed people from every job opening in February. Federal assistance became necessary overnight and, to the credit of Congress and the Treasury, they got it done quickly. Now they’ve got to decide whether or not to keep it going, or how to modify it going forward.

Writing for the Peterson Institute for International Economics, Harvard Professor Jason Furman estimates the potential damage that could be done if these $600 checks stop going out abruptly at the end of July when the Federal Pandemic Unemployment Compensation (or FPUC) program expires (emphasis is mine):

Assume for the sake of illustration that 20 million people are still on unemployment insurance by the end of July. The expiration of federal supplements to unemployment insurance would dramatically reduce these people’s income. It would also remove about $50 billion a month from the economy. Given that the main constraint on employment is the relatively small number of jobs available, it is inconceivable that many of these 20 million people could quickly go out and find work. As a result, they would reduce their spending—hurting other businesses, costing other workers their jobs, and reducing mortgage payments and thus straining the financial system, resulting in lower overall GDP.

These effects can be quantified using a methodology similar to that used in the past by the CBO (2014) and the Council of Economic Advisers (2009, 2014), which assumes a multiplier of 1.5 for aid to directly affected individuals (roughly the mid-point of the CBO estimates)…

Relative to the full continuation of expanded unemployment insurance, expiration of benefits would reduce GDP by 2.5 percent on average in the second half of 2020, costing an average of 2 million jobs over the next year and raising the unemployment rate by up to 1.2 percentage points (figure 9). These costs would be borne not only by the currently unemployed (who would receive smaller benefits) but also more broadly across the economy. 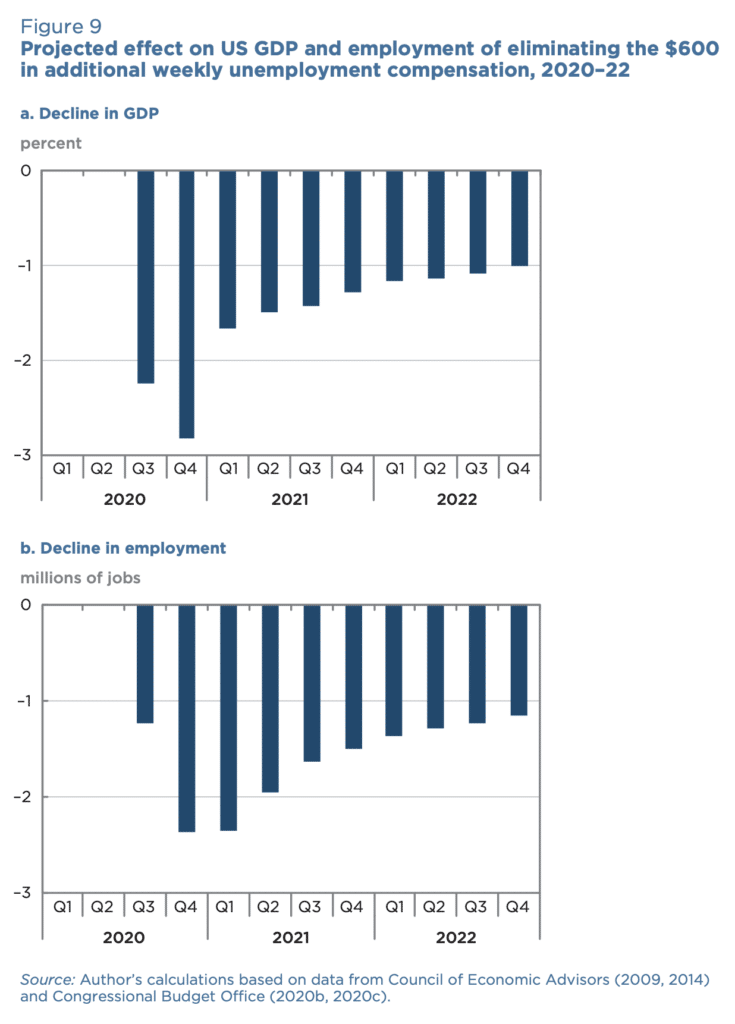 So, do we want to turn the recession of the first half of 2020 into a depression for the second half? Well, this is how you’d do it.

You can read the rest of Furman’s paper at the link below, including a proposal for creating “automatic triggers” that raise and lower the amount of unemployment insurance based on economic conditions in each state and the changing unemployment rate.

US Unemployment Insurance in the Pandemic and Beyond
PIIE – July, 2020