In the state of Texas, hospitalizations for the virus are up 42% since Memorial Day. The state of Arizona just issued a warning that they’re getting close to full capacity in their hospitals. Many states that have reopened are experiencing surges of cases and deaths, along similar trajectories of the spikes seen in the early days for New York, New Jersey, California, Michigan, etc.

And while this uptick in cases hits dozens of states, the S&P 500 grinds ever higher, led by the now-expected large cap growth rally. This is also being accompanied by a surge in corporate credit enthusiasm along with a three-ring circus of speculative feats, penny stock freak shows and momentum magic acts.

Why isn’t the market spooked by what some are describing as the virus’s “second wave”?

I have a few reasons I’ve listed. I may not know much about virology, epidemiology or public health, but I know a lot about people and investor attitudes, so here is my best attempt to understand it:

1. We did this already. It’s easy to scare investors. It’s harder to keep them scared. There’s a lot of regret from investors who sold toward the bottom as stocks recovered right in their faces just weeks later. There is an unwillingness to have the same thing happen again, to the same people, so the hesitance to swing back to cash on virus headlines is high. The White House has stopped talking about this subject. Let’s assume half of the investor class takes its cues from the President because of party affiliation and decides to ignore it too. Maybe more than half.

2. The Fed is literally telling us, in word and in deed, that they believe the best way to satisfy their dual mandate of price stability and full employment is to continue to purchase tens of billions worth of securities every month, from corporate bonds to Treasurys. They are not going away. They are saying they are not going away. The message has gotten through. And as they buy low risk assets from the holders, those holders turn around and put that cash into higher risk assets. The Fed takes your place in the money markets while you run off and join Ringling Brothers.

3. We are better equipped to handle new cases. Think about how much medical professionals, EMTs, nurses, doctors and hospitals have learned since February. There’s no way we’ll be as overwhelmed on a patient by patient basis as we were in New York this winter. Right?

4. Nursing homes. Everyone I talk to points out the statistic of how many of the deaths occurred in nursing homes versus outside of them. The last person to relay a stat to me said 30%. The person before that said 25%. Who knows what data they’re quoting, from what date and from what place? It’s just what they believe – that infections among the most vulnerable populations made the virus look much more deadly than it is. I know this is very controversial, and I’m not saying it’s true – I think this is just what people feel now. So they are less afraid for their lives, and acting that way with their investment portfolios.

5. Gains embolden us. This is a fact. We are less afraid, as an investor class, when it seems like money is growing on trees. That’s what 50% rebounds in large, well-known stocks will do. That’s what “the best 50-day period for US stocks ever” will do. Money attracts money.

6. It’s global. Stock markets around the world are rallying as central banks around the world do some version of what the Federal Reserve has done. European stimulus and even policy change have gone further than ever. Italy is selling a new class of sovereign bonds to its citizens that include a coupon linked to the future GDP growth of the country’s economy (they’re called Futura, nice). Chinese stocks are on fire, German stocks are up 20% in a month, etc.

7. Casino! Popular sports commentators (and their legions of followers) have pivoted to playing the stock market in the absence of games to bet on. We haven’t seen this much excitement from retail investors in 20 years. I was there last time, there are a lot of similarities but valuations are more reasonable and there are way less IPOs dumping new shares on us now. New brokerage account openings are skyrocketing. Fidelity is running ads on active trader subreddits. Barstool’s Dave Portnoy has introduced perhaps hundreds of thousands of young men to the game they never knew they could love. This may not be moving the $1.5 trillion market cap for Apple, but it is definitely influencing the prices of smaller stocks and more speculative ETFs. We’ll see if this phenomenon persists as the NBA gets started in July and the NFL season approaches.

UPDATED!!! Including this chart from my pal Jon Krinsky – Nasdaq trading volumes have exploded! 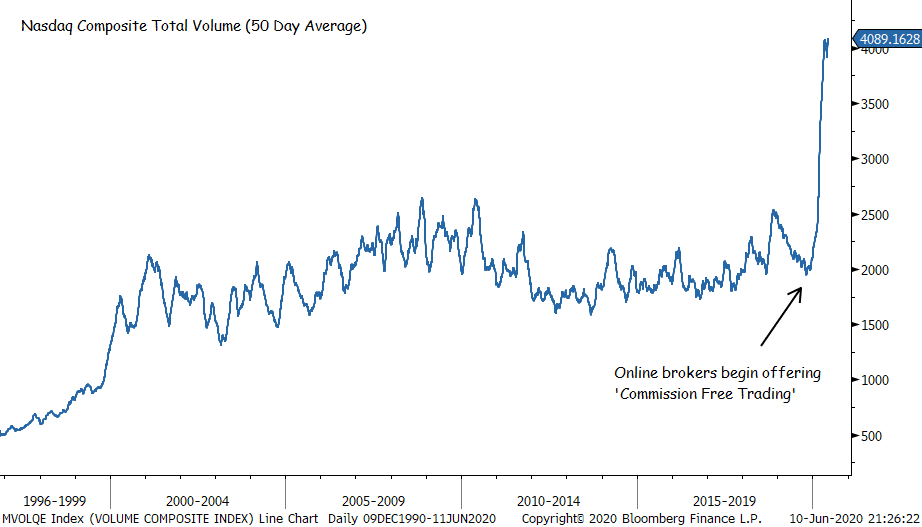 8. Treatments and vaccines. Stock market participants tend to be optimists. I can’t know for sure, but I would guess two thirds of them believe that, between J&J, Moderna, Astra Zeneca and the hundreds of other trials taking place, something big is coming in the vaccine space. Enthusiasm for improved treatments is probably running on a parallel course.

9. Masks. They cost nothing and they work. In metropolitan areas around the country, people are wearing them. Takeout from restaurants, counters retrofitted with plexiglass and clear acrylic shields, delivery – we may not have the “old economy” but the new post-virus economy features businesses scratching and clawing their way back, which I love to see. Investors have decided that life will go on in the towns they live in, so why wouldn’t they invest accordingly?

10. Statistics. You can make a statistic say whatever you want, depending on when you start counting from. A lot of the data we’re seeing – in both corporate earnings reports and the overall economy – is coming off the bottom. Some of the percentage gains, for things like housing and airport traffic, are almost cartoonishly outsized. A Harvard economics professor remarked recently that Trump will have some of the best economic growth data in history to run on this summer because we are rebounding off of such low levels from the spring. You can fool a lot of people this way, and investors can always be relied upon to fool themselves.

Anyway, that’s what I think is going on. What do you think? Tell me here.