This is my opinion, knowing as much as you do about the timetable for reopening the economy and reading the same articles you are about unemployment and such.

I think the next leg down for the economy and stock market will center around credit cards. It’s easier to let a credit card loan go delinquent than it is to skip car payments or mobile phone payments. If you have a car and a phone, you can get a new job and manage your life. If you’re late paying back a credit card, you can still get through the days and months ahead.

I’m looking at this morning’s jobless claims number and I’m just absolutely blown away by how much damage has been done to people’s lives. I had to walk away from the computer for a few moments to mentally process it. 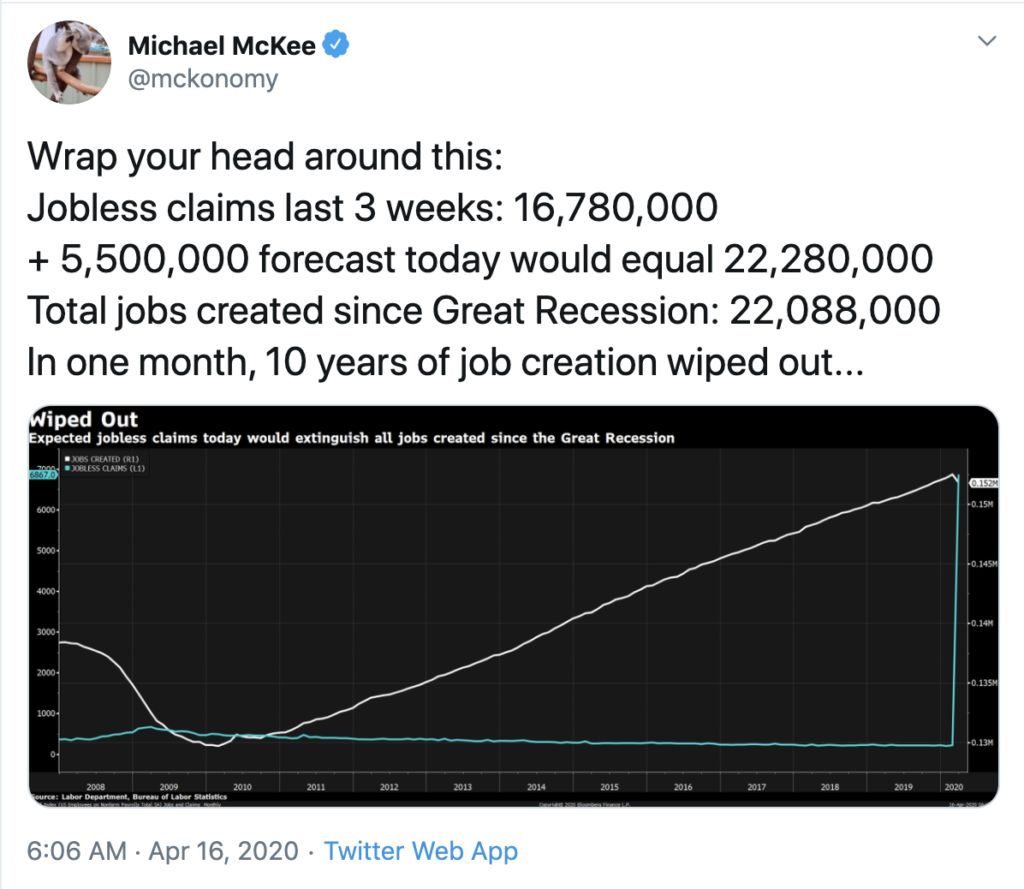 And the conclusion I come to is that credit card delinquencies might be worse than what’s currently expected. As the big banks have reported earnings this week, they all made mention of the fact that they’re raising their reserves in advance of these delinquencies. They all know what’s coming, because not only are they the lender, they also have access to the savings and checking account information for each of these households in many cases. It’s going to be a f***ing wreck and they’re preparing to lose a lot of money on all these credit cards.

Here is a basket of credit card stocks, and, as you can see, they’ve all done much worse than the S&P 500 overall – in both the fall from February and in the bounce from late March: 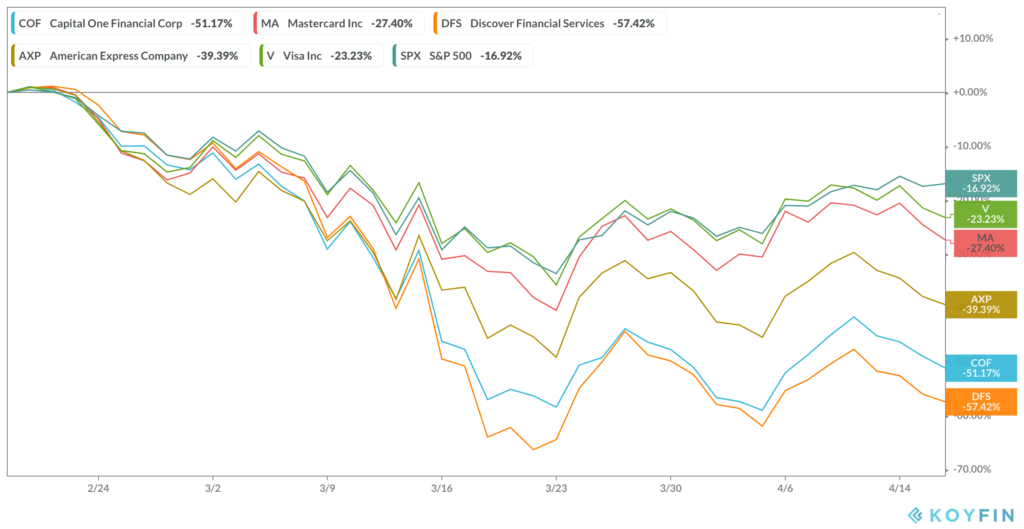 For example, Capital One Financial (COF), one of the largest bank issuers of credit cards, is cut in half, down more than three times what the S&P 500 is, and has not really bounced at all.

Just a really quick and dirty primer on the differences between these companies and how they issue credit (these are general facts, staying out of the weeds for the purposes of this post):

Visa and Mastercard do not issue credit, they are the toll booths sitting between merchant and customer. They earn the tiny interchange fee on each transaction for verifying that the customer has credit and the merchant should complete the sale. That’s why, for example, you might have a Capital One Mastercard in your wallet. In this example, Capital One is on the hook for your balance while Mastercard is just getting paid to facilitate the transactions you do with the card.

American Express, with 63 million cardholders, is different from Visa and Mastercard. They are the bank that is on the hook for the credit of their cardholders. This is a double-edged sword – they make more on each transaction, but they have added risk. Amex has historically been an up-market brand, catering to businesses and people with better than average credit for the most part. That’s probably not going to help them much in this environment, because everybody is f***ed.

Warren Buffett’s Berkshire Hathaway bought up 10% of American Express’s shares in 1993-1994 for an average cost of about 8 bucks per share. Over time, through buybacks and such, that stake has grown to nearly 20% of American Express – a stake that has just gone from being worth over $20 billion to closer to $10 billion pretty much overnight. One source pegs Buffett’s total coronavirus-related portfolio losses at over $70 billion!  So the Amex bludgeoning is just a part of that.

Moving down the chain is Discover Financial Services, which, like Amex, is mostly on the hook for its 39 million customers’ balances. Unlike Amex, Discover has always been a down-market brand. I almost never see a Discover card in the wild. If someone busts out a Discover card to split the check at a Saturday night dinner, I’m always like “dude, what the hell is that about?” Anyway, DFS is down almost 60% already.

I left out the major bank issuers of credit cards aside from Capital One to keep the chart clean, but it’s going to be a problem for all of them.

Visa has 336 million cardholders in the US and Mastercard has another 231 million. There’s obviously a lot of overlap in these numbers. Citibank has 95 million cardholders, JPMorgan Chase has 83 million, Capital One has 62 million, Bank of America has 58 million. They’re all upping their loan loss reserves. There are smaller credit card issuers like Synchrony that we haven’t even gotten to, but they’re all in the same boat.

Seventy percent of the US economy is based on consumer spending and household consumption. Which will go on, as it always does, but at lower levels as the economy remains partially shut in and whole industries are impaired for months to come, awaiting a vaccine. So credit card issuers are facing lower consumer spending and higher delinquency rates. Which means gigantic write-offs and disappointing revenues as far as the eye can see. Is that already in these stock prices? What is the spillover effect to other parts of the economy? For example, credit card issuers spent $336 million advertising themselves last year. That’s what I think leads to the next leg down – as this reality sets in, expectations fall and charges are taken.