Social Capital’s Chamath Palihapitiya came on my CNBC show, the Halftime Report, last week and voiced the frustration that many Americans are feeling right now concerning the government’s plan to rescue the economy. Chamath correctly states that there are many market participants who will be unfairly bailed out by the combination of Federal Reserve and Treasury actions that seek to put a floor under the markets to offset the state-mandated shutdown of business and economic activity. He is also correct in criticizing the transmission mechanism being used – large scale asset purchases – which is happening in parallel with direct deposits for workers who’ve filed their taxes online as well as expanded unemployment benefits.

Millions of people have now watched and shared the various clips of this interview, making it the most viewed clip of the Halftime Report ever, by double, according to the show. Our host Scott Wapner asked “why should anyone deserve to be wiped out?” as a result of this natural disaster, that wasn’t caused by anything that the business community did. And this is where I disagree with Chamath – his take is that equity shareholders like hedge funds and family offices deserve to be wiped out because they are supposed to be the most intelligent risk managers and this is what you get when you’re wrong.

And while this is true, in terms of the way capitalism works, it is not the hedge fund managers and family office CIOs who will be most injured by a “burn it all down” approach. It is regular people. People who were minding their own business, waking up each day, going to work to support their families, and putting money away for retirement when possible. I know that Chamath cares deeply about Main Street’s struggle, but I think he underestimates the toll that Main Street would take in the course of “punishing” the BlackRocks and Blackstones of the world.

The first thing you have to remember is that there are $34.6 trillion in retirement assets in the US. 52.1% of the $34.6 trillion in retirement assets are individually funded through defined contribution pension plans, IRAs and annuities, according to SIFMA data. That’s ordinary people, not hedge fund managers, not “Wall Street Fat Cats”, not Bobby Axelrod. 52% of households own stocks in some form, which is 65 million households – the vast, vast majority of whom do not deserve “punishment” for the weak and lackadaisical response of the Federal government as the coronavirus began to spread in America.

Households own 37% of all of the stocks in the US market, and stocks represent 28% of households’ total financial assets. The median household has approximately $40,000 in the stock market and it represents a large part of their future retirement nest egg.

Here is a breakdown of that $34 trillion worth of retirement assets:

Mutual funds are the predominant vehicle being used by households to invest in the stock market. This money appears to be “institutional money” on the surface but in reality it’s money that ordinary people have entrusted to institutions to invest on their behalf. Here’s SIFMA: 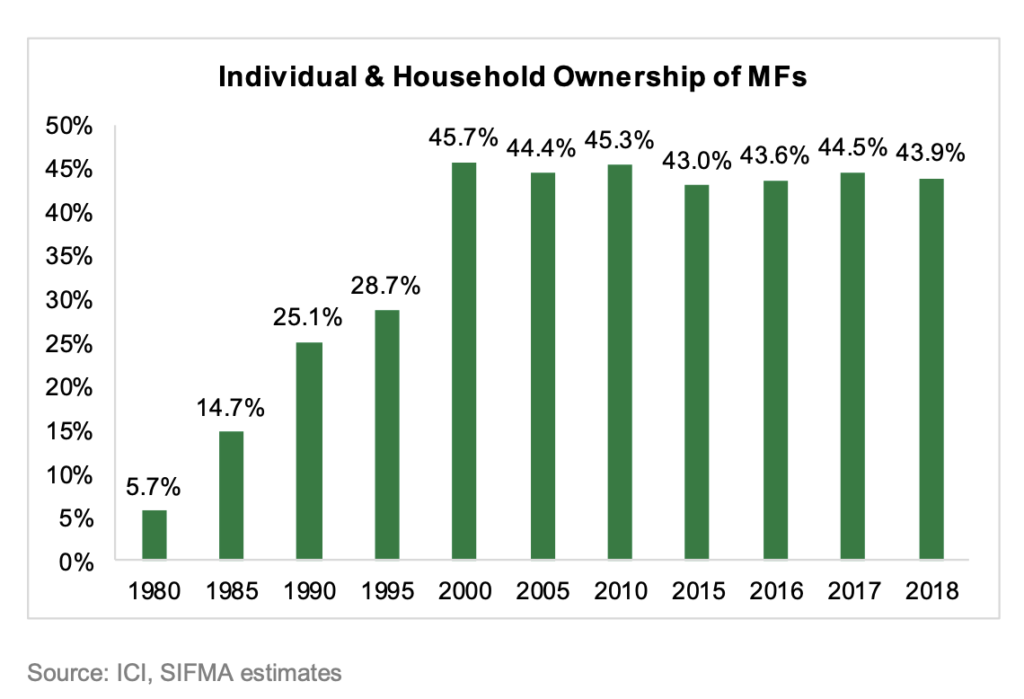 No one would look at the equity mutual fund ownership of Americans and say “F*** em, they get what they deserve.” I know Chamath wouldn’t either. Many of the people whose savings are included in these totals are among the front line workers in hospitals, food services, police, firefighters, paramedics, etc. Imagine them trying to do the heroic things they’re doing each day while also watching their retirement assets drop another 30%.

Unfortunately, when you take policy actions to prevent the next Great Depression and stop the stock market from going to zero, you also end up bailing out some people who were investing recklessly, or some people who don’t deserve to have outsized speculations “saved” by Federal Reserve asset purchases. When the Treasury wields its rescue fund of $500 billion, the possibility that people will be angry about how much of it is going to which industry is probably 100%. The anger is perfectly legitimate. Especially when issues like stock-based compensation and CEO compensation and buybacks and everything else gets thrown into the mix. Which it will.

But this is also legitimate: Lots of this anger will not be accompanied by reasonable solutions or better alternatives. Because there might not be any.

A rescue of Corporate America will also be a rescue for the 99 million people who hold mutual funds as part of their retirement plan, and the 65 million households who are invested in the stock market, and the 27% of the stock market that is made up of pension fund money, and the 26% of the stock market that is held by state and local government pensions and 12% that is made up of money from federal pension plans. Ordinary investors should not be collateral damage in an attempt to let CEOs of public companies get “wiped out” during a once in one hundred years’ public health crisis.

I also want to address the idea that if companies are put through Chapter 11, the employees barely suffer and only the wealthy stock owners get smacked around. It’s not the case. Bankruptcies are devastating for the employees who work at a company undergoing them. In the first 7 months of 2019, 43,000 jobs were lost to corporate bankruptcies, which was 20% higher for the comparable number a year earlier and almost reached the total 50,000 lost jobs lost due to bankruptcy in the first half of 2009.

There are virtually zero corporate bankruptcies that aren’t accompanied by a plan to lay off workers for the reemergence. The two go hand in hand. We’ve already seen 17 million people lose their jobs in the last three weeks according to the official stats, and that’s just the people who managed to get through on the phone lines. We know the reality is even worse. A wave of mass bankruptcies of publicly traded companies will only significantly inflate those numbers beyond where they’re already headed.

In addition to the toll on employment, we also must address the fact that millions of employees are compensated, in part, with stock in the companies they work for. Everyone loves this when the stock market is rising. We can’t ignore it when the stock market is under threat of annihilation because of an exogenous event. There are normal risks that employees compensated with stock ought to be expected to endure. This isn’t one of them.

There are over 6,600 Employee Stock Option Plans (ESOPs) in America right now. According to the National Center for Employee Ownership, “These plans cover over 14.2 million participants, of whom 10.6 million are active participants—those currently employed and covered by an ESOP.” The amount of money employees have invested in their employers’ stock option plans is over $1.3 trillion. These shares are owned by older workers and younger workers. Republicans and Democrats. Rural and Urban and Suburban workers. These plans know no geographic boundaries – the Midwest has more than any other region, followed by the South. This isn’t “New Yorker bullshit” or a Hamptons / Wall Street thing. This isn’t a Coastal Elite thing.

The NCER tells us that “as of 2014, 19.5% of all employees working in the private sector reported owning stock or stock options in their companies, while 7.2% specifically held stock options. Looked at another way, 36% of employees working for companies with stock (this excludes government employers, nonprofits, partnerships, etc.) owned stock or options in their companies. This means that approximately 32 million Americans own employer stock through ESOPs, options, stock purchase plans, and 401(k) plans.”

We are talking about millions of people who work for companies in industries that have been utterly devastated by stay at home orders. They have been counting on these equity stakes to help fund their future. Do they deserve to be wiped out? If so, why, exactly?

As Tim Duy put it, this crisis was not caused by Wall Street excess or corporate malfeasance. It’s a natural disaster:

For the macroeconomy, it’s really not that complicated. Stop looking for someone to blame because there is no one to blame.

It would be nice if there were someone to blame, but there simply isn’t this time.

Business owners and corporations cannot operate with enough of a cushion for the possibility that the government shuts down all economic activity indefinitely and revenues dry up to zero overnight. If everyone is supposed to be prepared for that, then there’s no reason for anyone to be in business at all. There may as well be no airlines and no hotels. If we’re going in that direction, then there’s no reason for there to be a stock market at all. We can go back to bartering. I’ll trade you a plump goose in exchange for a wooden barrel. We can get rid of the Federal government too, in this case, and just go back to sticks and stones.

Chamath is right – Main Street already feels like they’ve been wiped out and, in many households, they have. So our focus should be on not making it any worse. I think running up the bankruptcy totals on principle makes it way worse considering how fundamental equity-market retirement investments are to everyday American households.