The Federal Reserve had a precursor before it became the lender of last resort. It wasn’t an institution or a government department. It was a single, solitary man named J. Pierpont Morgan. Mr. Morgan, he was called in the newspapers, and you didn’t need to go any further – everyone knew to whom you were referring.

Stock market panics were common in the early 1900’s because of the agrarian nature of the economy. Each summer, the local banks that catered to farmers throughout the country began calling their money back from the banks in New York City and Chicago so they could raise enough capital to bring in the harvest. The recall of money literally involved shipping vast quantities of gold out of the reserves of the banks by wagon and coach. And as this money was withdrawn from the cities, the money for speculation in stocks or commodity contracts dried up. Which would lead to a drop in financial asset prices and, sometimes, a market panic.

October was frequently the make or break moment – where there simply wasn’t enough money to physically go where it was needed. Stocks crashed and grown men and women ran on their banks, hoping to be the first in line to withdraw their funds. This run would feed on itself – if you saw your neighbor racing to the bank, your first instinct would be to say “I had better do the same.” I watched this same psychological process play out over groceries in my town two weeks ago.

In October of 1907, we were a decade away from having a Federal Reserve, but the nation was gripped by its biggest, most acute panic in a generation. Thousands of panicked bank customers, investors, business owners and financial market officials packed into the intersection of Wall & Broad, thronging the facade of the US Subtreasury at Federal Hall. 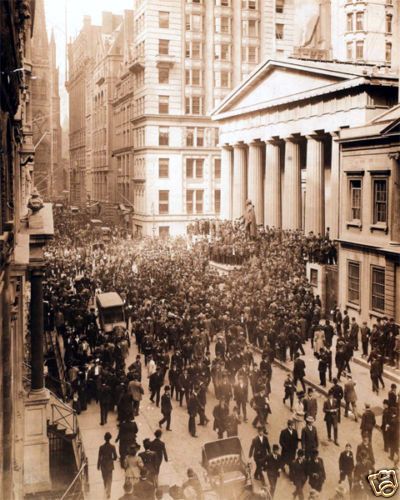 There was no Twitter and no cable news channel dedicated to the markets. The news was delivered at dusk when the day was done, in stacks of paper hawked by young boys on street corners. So if you wanted to find out what was going on, you had to actually be there. And you got your news by overhearing other panicked people discussing it while standing in front of the bank or the Exchange. Most of what you heard were rumors, transformed in the telling and retelling, spiced up and embellished on their journey from the original source to your own ears. There was a void of factual discussion, and the situation changed so rapidly that even the actual facts had become stale and unhelpful by the time they had fully made the rounds.

And into this breach stepped J.P. Morgan. Had to be someone.

On October 24th, the situation had come to a head. Morgan arrived into the middle of that day’s panic on Wall Street in a coach drawn by a white horse. The crowd parted to make way for him, and then followed him down the street until he stepped out to consult with the officials gathered in front of the New York Stock Exchange, which was across the street from his bank.

Around 1:30 p.m., Ransom H. Thomas, the president of New York’s Stock Exchange, and one of his assistants came over to the Corner in a state of great excitement. When he arrived, the offices of J. P. Morgan & Company were full of other agitated men, but Thomas rushed up to the financier and said, “Mr. Morgan, we will have to close the Stock Exchange.” Morgan turned to him and asked sharply, “What?” Thomas repeated, “We will have to close the Stock Exchange.” Morgan asked, “At what time do you usually close it?” Thomas answered, “Why, at three o’clock.” Morgan thundered, “It must not close one minute before that hour today!” emphasizing each word by keeping time with his right hand, middle finger pointing directly at the president of the Exchange.

The situation was grim. Fifty of the largest investment firms on The Street would be wiped out completely unless a pool of money could be established to buy what everyone was trying to sell. There was less than an hour to secure it. Morgan knew that a closure of the exchange would only fuel the desperation.

Morgan’s colleague, the President of the National City Bank, offered up $5 million for the rescue fund. Thirteen other banks fell in line and chipped in shortly after. It is said that by 2:16pm, Morgan had secured $24 million and by 2:30pm, that money hit the stock exchange like a wave. People clambered on top of each other to gain access to this capital to bail themselves out of their positions. The crisis didn’t end at that moment, but it was the first glimmer of hope. Morgan’s actions over the next days and weeks would put an end to the panic. His sheer force of will and dominant personality brought frantic authorities and petrified bankers to the negotiating table so that the crowd would see a united front rather than a confused rabble. He famously instructed the bank tellers to count out the dollars slowly at their windows so that enough time would pass for the fever to cool off.

This episode became a turning point for public opinion and political appetites about the need for a central monetary authority to address panics in the markets and banking system. The economy was too mature and interconnected for it to rely on the leadership of one private banking titan’s ability to marshal his peers. This would ultimately lead to the meetings and debates that would create the Federal Reserve national banking system.

Today in 1913, just six years after his masterpiece of financial statesmanship, J.P. Morgan passed away while traveling in Rome. He died leaving behind a fortune of $68.3 million, or $1.8 billion in today’s dollars. But the legacy he left behind, his steadfastness and bravery during a crisis, would add up to an exponentially larger tally over the century that followed.