Scott Minerd (Guggenheim) weighs in on whether or not the “insurance cuts” the Federal Reserve is in the process of executing have any real efficacy historically. He finds that the usage of rate cuts during the late stages of an expansion have a mixed record – sometimes they’ve been able to put off a recession but mostly they haven’t…

The historical evidence is mixed on this issue. While there have been two notable periods in the 1990s where rate cuts helped avoid—or at least delay—a recession, we also know that the Fed was cutting rates in advance of the last three recessions.

The Fed does not have a consistent track record of using rate cuts to stave off recessions. While it was successful in the 1990s, cutting rates did not have the same impact in other late-cycle scenarios. 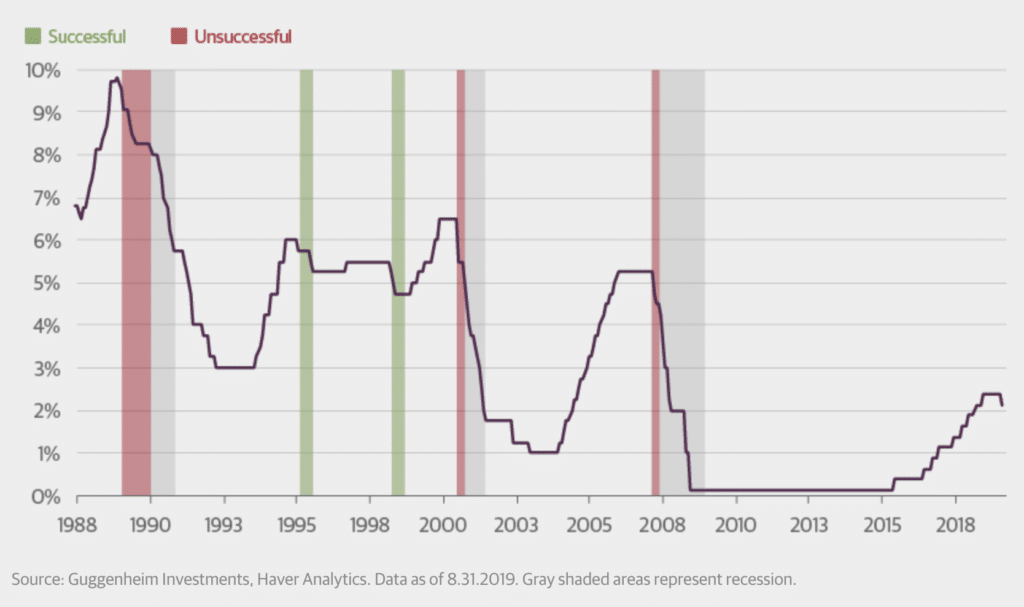 Josh here – now, of course, the Fed Funds rate is just a blunt tool and to expect it to stave off every economic slowdown would be to ascribe “silver bullet” powers to the cost of money – which is not reality. There are too many other factors that drive economic growth (or the lack thereof) – everything from demography to business conditions to innovation to geopolitics.

So perhaps insurance cuts are just there to serve as a “confidence fairy” and make capital markets participants feel better? What part of the Fed’s dual mandate does this sort of operation satisfy? Unemployment is low and prices are tame. Are we really trying to encourage more leverage? Plenty of that in the system already too.

Forecasting the Next Recession: Will Rate Cuts Be Enough? (Guggenheim)