If you’re a normal person reading this, it is likely your diversified retirement portfolio’s nominal value declined by somewhere between 2 and 4 percent today. Maybe you didn’t bother logging in to the 401(k) provider’s website. Maybe your advisor’s login gateway is too annoying to deal with so you just haven’t bothered to check. But here it is – one of the biggest Dow Jones point declines on record, and a pretty nasty day for the S&P and Nasdaq in percentage terms too. 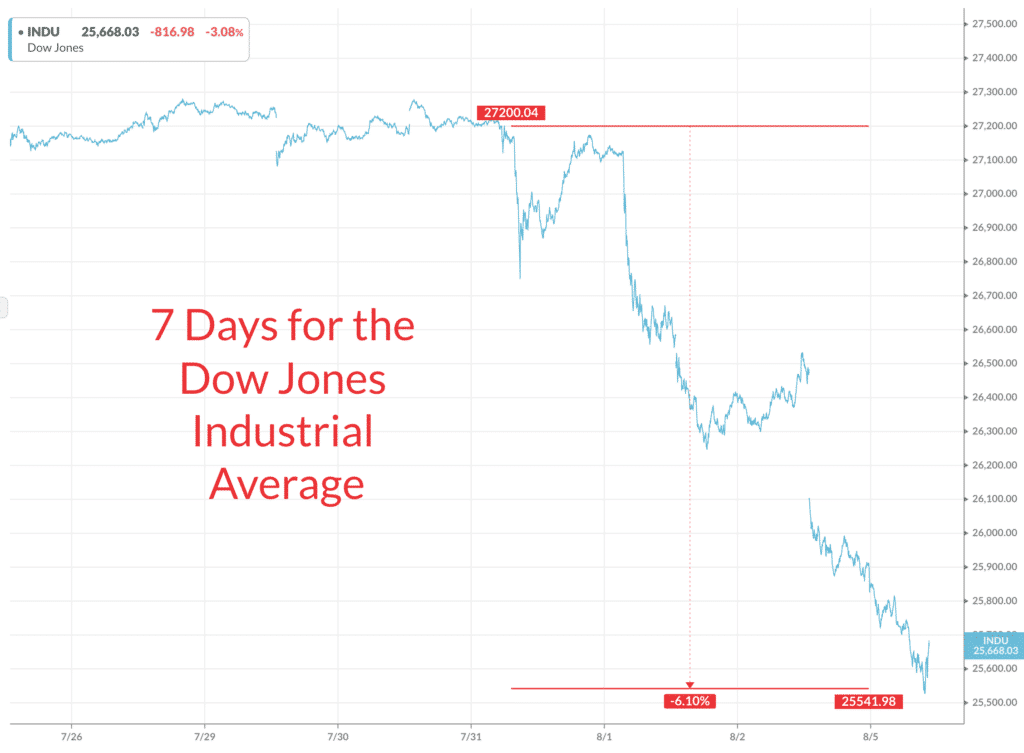 There are two things I want to mention, though.

The first is, this isn’t about money for the Chinese. I mean it is, but it’s more than that. Saving face is big with these people, and they weren’t going to lay down for a new round of tariffs – as decreed by the President last week – and do nothing. So today is the something – a tit-for-tat drop in the Yuan/dollar peg that effectively nullifies the effect of the additional 10% tariffs going on in early September. But wait, there’s more – Chinese state media reports they’re done buying agricultural products from our farmers too.

Sounds like they’ve had it and the gloves are now off. Not great news for the global economy, overall.

So that’s the first thing. But here’s the second thing…

Stock markets have to go down.

The US stock market must fall.

Without the threat of losses, the gains never show up.

I want you to picture a world in which stocks never went down. What multiple would you pay for the earnings of a public company’s stock if it was never going to drop? What would make you ever sell your stocks other than needing to use the money?

In theory, you would pay an infinite multiple and you would hold on forever. A one-way asset would eventually surpass whatever price you paid in a best case scenario, but the worst case scenario would be flat returns.

If that sounds great, I can assure you that it’s a horror story.

The Dow Jones would sell at thousands of times the earnings of its component companies rather than the 10-20 times it has traded at historically. It would all be based on nothing. For long periods of time, possibly forever, stocks would remain elevated and yet go nowhere to the upside. Some shareholders would sell and others would take their place at the same prices. No downside, but no upside either.

An equilibrium would set in wherein no one ever lost money and no one ever made any. Under the weight of this reality setting in, stocks would eventually fall no matter what you did to guarantee against it. “Well, even though there is no risk, there’s no reward – so maybe I’ll just do something else with my investment dollars.”

An infallible market of stocks would have the seed of guaranteed fallibility implanted within from inception; a sort of original sin.

The only reason stocks can go up is because they can also go down. It is this risk that keeps investors in check and that keeps people from paying an infinite amount of money for shares in a business. The reintroduction of risk, in the context of this summer’s sell-off, is the best thing that could have possibly happened.

Because there are examples throughout history where the belief that stocks couldn’t go down became widespread enough to do serious damage. The 1990’s was one of them:

Obviously the prices paid during that era took a long time to come back around. That lack of fear led to a lack of forward progress in price for over a decade.

Fear is the most critical, functional cog in the investing machine. It’s got to remain present and front-of-mind in order for there to be any future upside for investors to capture. Long-term investors should cheer when fear is reintroduced into the markets. The cascading blood-red quotes you see in front of you on your screen, that panic you hear in people’s voices as they share their war stories – those sights and sounds are the physical manifestation of the equity risk premium reasserting itself back into the equation.

Stock investors get paid for facing these fears because so many others will not face them.

When nobody fears anything, stocks no longer work for investors’ long-term return needs. When the possibility of loss goes away, so does the probability of gain.

A fierce warlord invades a village during the civil wars that plagued Japan in feudal times. All of the villagers flee into the forest save for a single Buddhist monk, who continues on with his meditation in the solitary temple atop a hill.

The warlord hears of this and commands his soldiers to take him to the old master. Rather than give the order to kill, he is curious and wants to see the man for himself.

When the warlord reaches the temple, the old monk remains unmoved. He does not bow or show any deference whatsoever. The warlord clutches the hilt of his sword and bellows at him: “You fool! Don’t you realize that you are standing before a man who could chop you down right now without blinking an eye?”

The monk’s calm reply: “And don’t you realize that you are standing before a man who could be chopped down right now without blinking an eye?”

A version of this post originally ran on August 23rd 2015