Yes, of course Trump could fire the Fed Chairman.

I’m not about to make a legal argument. Instead, like a five year old, I’m just going to point out what’s blatantly obvious and doesn’t require Constitutional scholars toiling late into the night, poring over old parchments by candlelight…

Donald Trump controls the Senate and the Supreme Court and doesn’t care at all about historical precedent, tradition or societal norms. He has shown a willingness to act out on whatever impulse comes to him whenever he feels like it. And more importantly, the Senate Majority Leader loves it all, and his wife works for the Trump administration, and his own popularity is under siege in his home state of Kentucky, which is a Trump state through and through. This isn’t a political rant, I’m just stating what you already know. You can agree with it and still support the President, I’m not writing to change anyone’s mind.

So here’s how it will play out. Powell comes through with an interest rate cut in July and the White House says, “it should have been done a long time ago. You see! We were right.”

Or…no cut in July, and the President demotes him and chooses another of the current Federal Reserve Governors to become the Chairman.

What happens next is obvious. Two avenues we could go down.

Avenue one: Powell steps down quietly and goes back to being a private equity industry multimillionaire, drying his tears with hundred dollar bills and speaking engagement checks.

Avenue two: Powell and the Federal Open Market Committee (FOMC), which is actually a separate group from the Fed Board of Governors, defy the President. This would be notable because it is actually the FOMC that makes the Fed Funds rate decision, not the governors. This would play right into the President’s hands however, because he could do to the Fed what he’s already done to the FBI and the Justice Department, turn the entire institution into “an enemy of the people”, meaning his people in Fox Nation.

For this there is some precedent – his Presidential hero, Andrew Jackson, led a massive populist revolt against the Bank of the United States and ultimately abolished it in favor of his “pet banks” domiciled within the individual states.

Most of the audience the President is speaking to doesn’t care much about the stability of the stock market and the job security of its caretakers on a day to day basis. They tend to be distrustful of “the system” and in many cases, with good reason. They are not taught about it, and, so few of the spoils from the whole thing end up in their bank accounts. The base has not quite connected the dots between easy Fed policy and runaway economic inequality. And so, perversely, it would be relatively easy to get them on the side of strong-arming the “New York and DC bankers” into acquiescence. 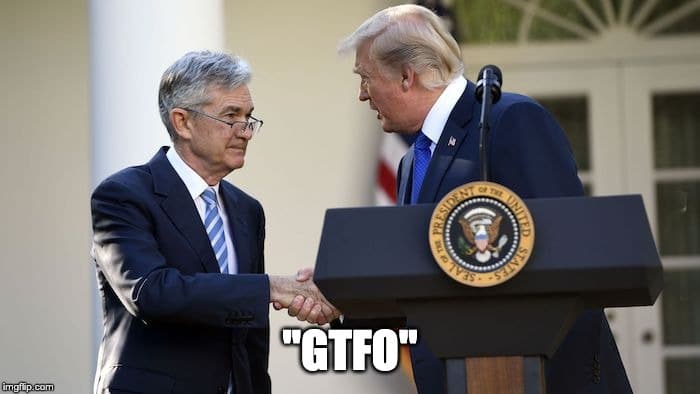 And then the Congress would get involved, which, in and of itself, would be a laugh riot. Today’s Congress can’t even manage to hold people to a subpoena for testimony. Here’s how that would look – Congresswoman Maxine Waters, Chair of the Financial Services Committee,  would call for hearings and possibly even a bill to protect the Fed Chair through his full four-year term. It would take two-thirds of both chambers to ratify it, which is irrelevant because Trump would veto it from a golf cart with a twinkle in his eye – even if you could get enough Republicans to break from him in the House (which you can’t) and in the Senate (LOLOLOLOL).

As with almost everything else he’s wanted to do, the President would steamroll any attempt to use legislation to protect Powell, and all the scholars and pols screaming about norms and whining “This is unprecedented!” from their TV studio chairs would be scattered to the wind like a fistful of sesame seeds (sorry, I’m eating a bagel as I write this).

One other defense against this in Congress exists, but it’s even more hilarious than the previously discussed mousetrap. The Senate could announce that they refuse to confirm any other nominee for the Fed Chairmanship until Powell completes his appointed term. But again, Mitch McConnell is not going to even entertain anything like this. There will be no such challenge. The President could appoint Jon Voight to the position and McConnell would wave him through. What are you gonna do about it? Cite the rules? LMAO.

And because we give voting rights to land rather than to people via the Senate, and the Senate Majority Leader has shown himself to have absolutely no interest in serving as a check on the executive branch, this is absolutely a thing that could happen, and likely will if the Fed doesn’t cough up a couple of 25 basis point cuts before the end of the year. No one can stop it. Not even Jared.

Now here’s the genius of Trump…and why he’s going to outplay them all yet again:

First, a majority of Americans don’t even understand what the Federal Reserve does or why it matters, on either side of the political spectrum. So it will be hard to hold their attention with the topic, no matter how hard the Washington Post and CNN try. Second, within 24 to 48 hours of tweeting out the demotion of Jerome Powell as Fed Chair, he will do something equally unprecedented and outrageous, which totally changes the topic. And you can say whatever you want about the intelligence of his base, but I promise you the media is dumberer.

Trump is the greatest manipulator of the news cycle of all time, and the people who run the news cycle in Manhattan are powerless to wrest control of it back from him. No matter how obvious he makes his intentions, they cannot help falling all over themselves to create TV segments and panels to discuss precisely what he wants them to discuss. He could fire Powell on a Sunday night and by Tuesday we’ll all be talking about his latest decree, “I have authorized the Zookeeper in Chief to deport all giant pandas back to China where they belong. Pandas are BAD FOR OUR COUNTRY!”

You’re giggling a little, but only because you know it’s true.