I picture Larry Kudlow waking up to a dozen or so texts from his friends in the business and investing community like “LARRY WTF? MEXICO TARIFFS? IS HE AN IDIOT??? WTF R U GUYS DOING?”

And then poor Larry having to check Twitter to find out that his boss, the President of the United States, just impulsively decided to throw the economy of North America into a recession over the border fantasies being whispered into his ear by one racist psycho or another.

President Trump said Thursday that he would impose a 5 percent tariff on all imported goods from Mexico beginning June 10, a tax that would “gradually increase” until the flow of undocumented immigrants across the border stopped.

The announcement, which Mr. Trump made on his Twitter feed, said the tariffs would be in place “until such time as illegal migrants coming through Mexico, and into our Country, STOP.”

In a presidential statement that followed, he said that tariffs would be raised to 10 percent on July 1 “if the crisis persists,” and then by an additional 5 percent each month for three months. They would remain at 25 percent until Mexico acted, he said.

I go back and forth – sometimes I think obviously, senile and then other times I think, no, this is just stupidity. I don’t know. Today feels like the latter…

Anyway, over the last 25 years, as trade across the North American continent has flourished, our supply chains, business climate and overall economic wellbeing has become increasingly intertwined with the state of the economy in both Canada and Mexico. It’s a little bit All for One and One for All. Just ask the US automakers. Just ask anyone in the food service industry. Or construction.

The St. Louis Federal Reserve Bank’s researchers took a look at this phenomenon and quantified it, not that any of the current policy makers in the executive branch care to or know how to read anything…

While many policies could have affected trade during the sample period, one important trade policy was the North American Free Trade Agreement (NAFTA), adopted in 1994. 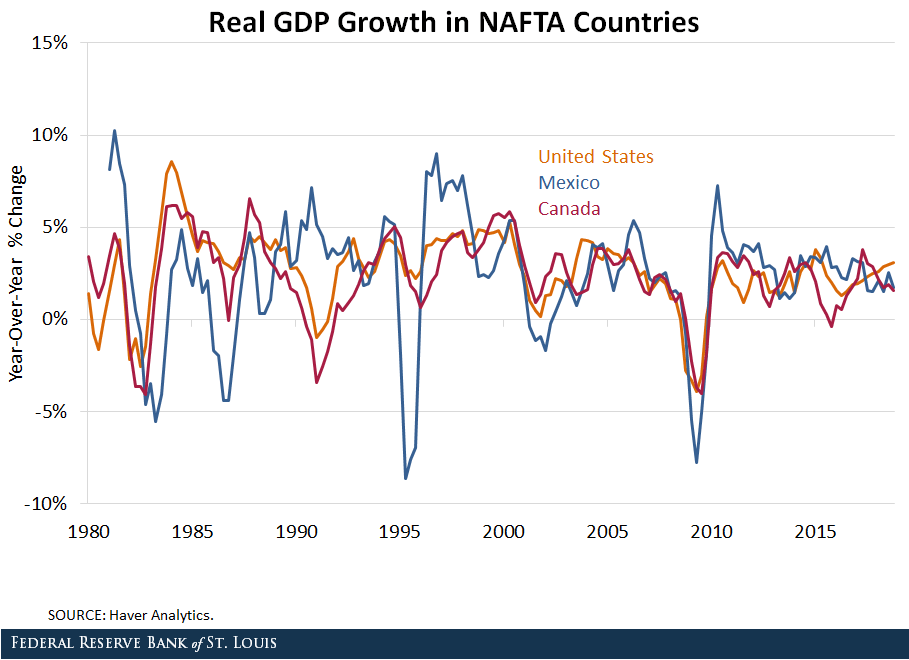 More from the St. Louis Fed:

After entering into NAFTA, the same increase in the U.S. recession probability raised the probability of recession over the next four quarters in Canada and Mexico by 8.24 and 7.59 percentage points, respectively.

One other notable point – I think this is the first time the threat of tariffs is being used for overtly political purposes rather than for economic ones. The tariffs placed on China were issued explicitly for the purpose of even-ing out a perceived economic unfairness, even if the way our policy is being carried out is totally misguided.

This time, our economy has nothing to do with it.

Markets are now pondering the threat of tariffs being used for all manner of disputes between Trump and the rest of the world. What if someone sends a tweet he doesn’t like? What if he’s snubbed at a summit? Do we just start blowing up trade agreements in retaliation?

Does it get any dumber than this? Over the last few years, my mantra has been “Stick around. Wait a while longer…it will get dumber.” Hasn’t failed me yet. I’m never surprised.

Oh, and don’t take my word for it. What do I know? Here’s Michael Bloomberg’s new op-ed: