The tricky part is what to expect from the Federal Reserve in 2019.  Based on our economic projections, and if the economy were the Fed’s only consideration, we could get as many as four rate hikes in 2019.  After all, nominal GDP growth – real GDP growth plus inflation – is up 5.5% in the past year and up at a 4.8% annual rate in the past two years.  Raising rates four times in 2019, which is more than any Fed decision-maker projected at the last meeting in December, would only take the top of the range for the federal funds rate to 3.5%, still well below the trend in nominal GDP growth.

As a result, we think the Fed will want to leave a “buffer zone” between the 10-year and the funds rate of about 40 basis points.  So, for example, if the 10-year yield stays near its current level throughout all of 2019, we could end up with no rate hikes at all in spite of economic conditions.

Josh here – I like the idea of the Fed being restrained somewhat by the 10-year yield’s insistence that we’re not only not overheating, but possibly in danger of importing even more disinflationary sluggishness from overseas. In the cycle that ended in 2007, the Fed hiked and hiked and hiked until the long end fell below the short end and there wasn’t even a pause to see if maybe they’d gone too far. We’re now nine hikes into the cycle. The Fed shouldn’t feel rushed and perhaps signals from the bond market will be heeded this time. 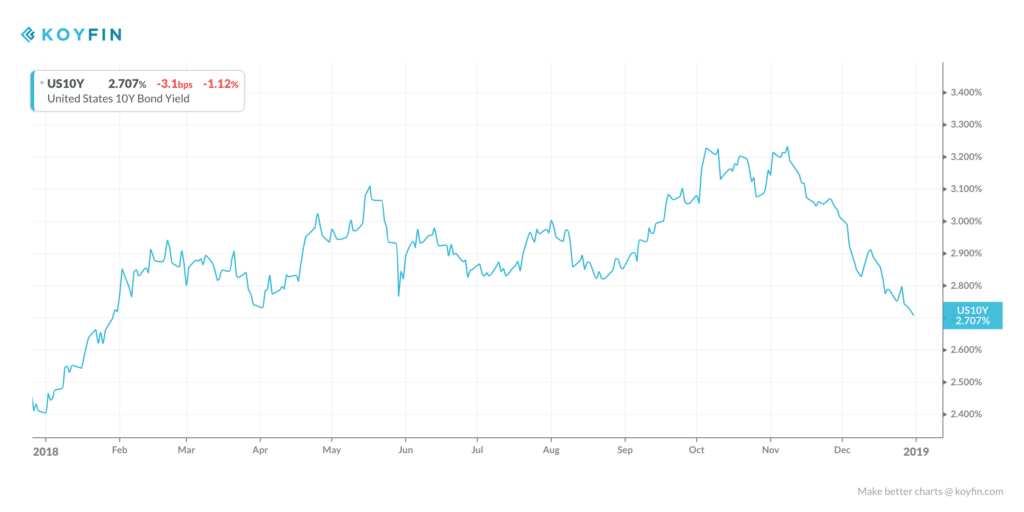 By the way, for context here’s how the 10-year Treasury has spent the last few years…we’ve retraced quite a bit of the economic enthusiasm already. Shout to Koyfin Charts.