The way I think about this is that the only thing that could make investors really bearish is a big sell-off in the market. You will never see extremes in bearishness after a big rally. So as stocks fall, their probability of prospective returns increases. The Bear-Bull thing is just a sideshow that accompanies this action and, as such, can be seen as a contrary indicator. Fine. But remember, it’s really about the prices themselves being better, not about how upset everyone is by the lower prices.

Chart of the Day: 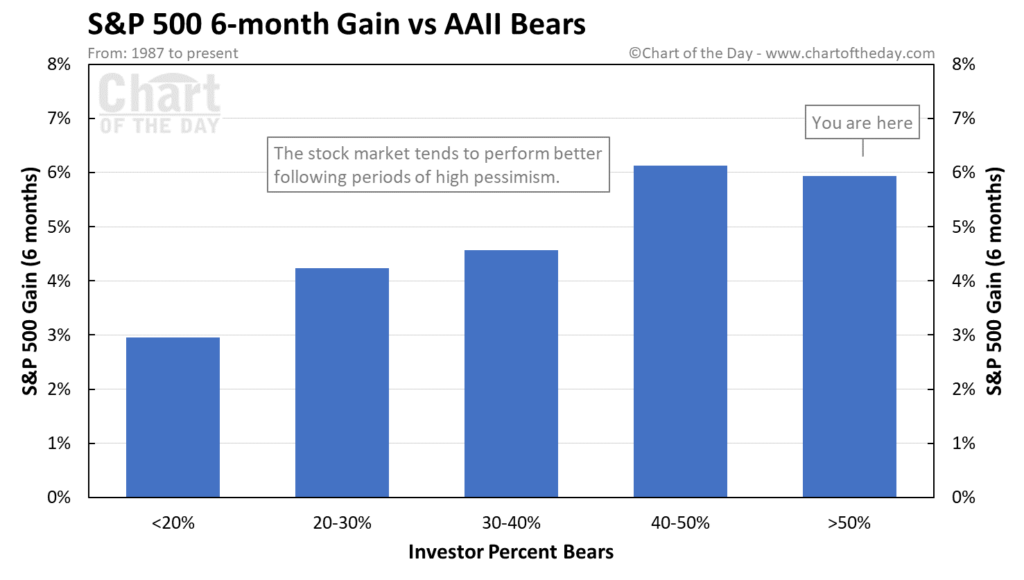 The highest percentage of AAII bearish sentiment was 70% and occurred on March 5, 2009 near the end of the financial crisis bear market.

The lowest percentage of AAII bears was 6% on August 21, 1987 shortly before the stock market crash of October 1987.

It’s almost as though the recent past of market activity has the ability to completely shift the mood of investors! It’s as though people become more optimistic after making a bunch of money and then fall into despondency upon giving some of those gains up! Extraordinary! Who knew?

Stocks are now pricing in endless interest rate hikes, as far as the eye can see, inflation that simply will not abate, a collapse in the capital markets due to more expensive money, a wave of defaults and an epidemic of earnings cuts, layoffs, crashing home prices and energy shortages with a side order of nuclear war. Maybe they’ll be right. If so, the returns on your stocks won’t be particularly important, as we’ll all be crouched in an alleyway with the carcass of a raccoon pressed to our lips, grunting at each other in the darkness while atomic gray ash cascades down from the sky, settling on our shoulders as the dusk of humanity begins.

I’d bet the other way. Things will be bad, but rarely as bad as the worst of our imaginations can conjure. And at the turn, the best and the brightest among us will emerge even stronger than we were before the crisis. Why? Because we will have kept a cool head and made good decisions, not emotional ones. Not everyone will emerge unscathed, let alone in an even better position. I wish this weren’t so, but we have to focus on the things we can control.

Chart of the Day