I like the way Ari Wald at Oppenheimer frames the current technical set-up for the S&P 500. Now we’re caught between the declining 200-day and the rising 50-day – the latter might be the next major pivot point for short-term traders and for general sentiment depending on what happens if and when we get there: 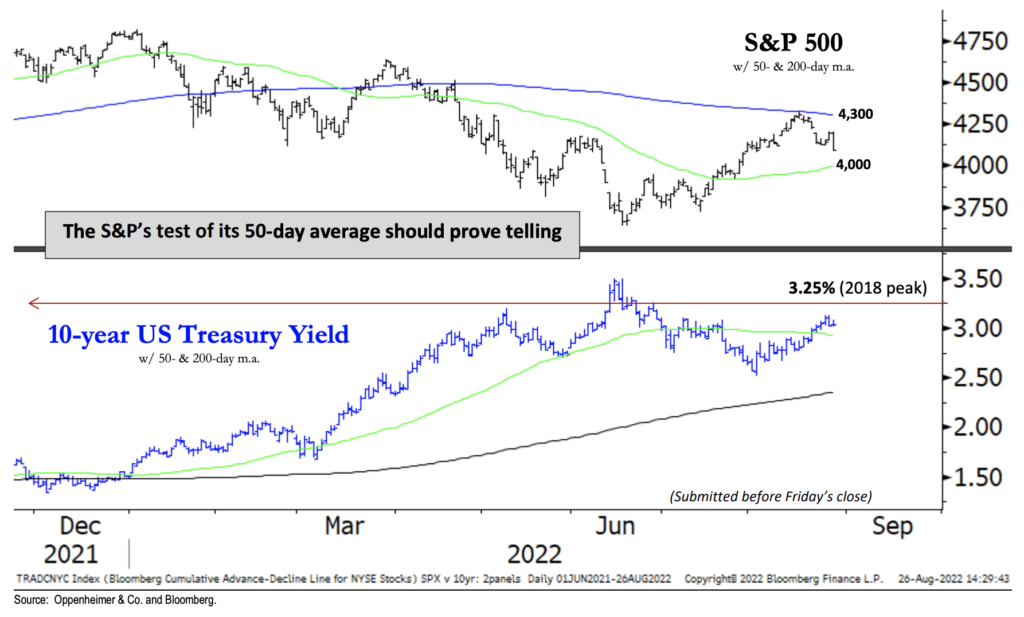 A Bullish Base vs. a Resuming Bear

The S&P 500’s rejection from its 200-day average and subsequent downside gap is a bearish warning because September seasonals are especially poor when the index’s trend is down. At 3.05%, the 10-year UST yield (10Y) is also into the warning track again—we’ve been using its 2018 peak (3.25%) as a bull/bear demarcation line for equities. However, against these near-term trading concerns, we still believe June’s reset in our market-cycle indicators suggests a longer-term bottom is forming. Looking ahead, a rally above the S&P’s 200- day average (4,300) would confirm a bullish reversal, and a breach of its 50-day average (4,000) would threaten it.

You don’t have to pay attention to technicals, you only need to understand that enough other people (and algorithms) most definitely are.

He’s got the 10-year yield in the bottom pane to to demonstrate that yields above 3% have been known to be a form of pressure on the stock market in recent months (and years).