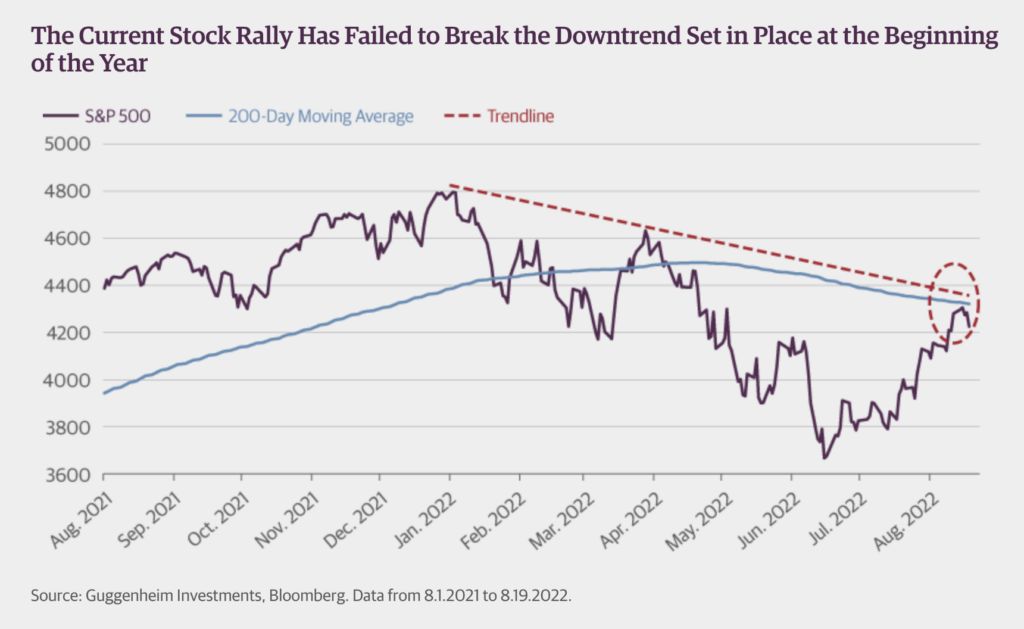 Sharing this chart from Guggenheim showing that the S&P 500’s bear market bounce literally stopped on a dime and was turned away at the 200-day moving average. It’s almost too perfect. We manage our tactical portfolio based on technically-oriented rules not because it always works (it doesn’t!) but because it eliminates feelings like fear or fear of missing out from the decision-making process. As you are probably well aware, from February til July, fear had been the predominant driver of market activity. This switched in early July, at which point fear of missing out began to take over.

Obviously, this sort of subjective switching back and forth between these sentiment shifts is no way to manage retirement assets or live your life. Unless, for some strange reason, you find it fun and interesting to glue yourself to a screen ten hours a day. Most people don’t want to spend what little time they have on this earth trying to guess the emotions of the investor class on a daily basis. I know I don’t.

In May 2008, the market recovery stalled just shy of its 200-day moving average. The S&P 500 went on to fall another 53 percent before bottoming in March 2009, bringing the peak-to-trough decline to 57 percent. Similarly, the bear market of 2000–2002 saw several failed breakout attempts that ultimately resolved in a peak-to-trough decline of 49 percent. Also worth noting is that the downtrend was not broken in either of these episodes.

Okay. It’s worth pointing out that most rallies that fail at the 200-day (or tenth-month) do not turn into 2008. But the risk is certainly there. Which is why having a rules-based answer for the possibility is so important for an already-wealthy investor whose got a lifetime’s worth of savings on the line.