Make yourself useful to smart, successful people. That’s how you should spend the first ten years of your career.

Surround yourself with smart, successful people and then bet on them. That’s how you should spend the next ten years. And then you’re done, if you want to be done.

Imagine someone had given you that advice at 22 and you followed it. Where would you be now?

Imagine if that advice were common knowledge rather than the kind of thing most people are forced to figure out for themselves? There’d be a lot more semi-retired 50 year olds walking around with enough money to do (or not do) whatever they want, seven days a week. Most of them would still be working on stuff, because it’s a mentality thing, a personality type.

Well, it’s not common knowledge. I gave it to you now, you can do with it as you choose. It works. It’s how Wall Street became Wall Street and Silicon Valley became the Valley. Nobody is born on Wall Street. None of the digital fortunes emanating from the campus of Stanford outward were magically discovered by the locals. Smart, successful people followed each other to these places and pulled trillions of dollars in value out of the molecules in the air around them. No oil strikes, no diamond mines. Most of the Financial District is built on top of Peter Stuyvesant’s old 1600’s Dutch farming colony (google “Bowery”). The World Financial Center was built on landfill. There’s nothing there. It was about who you met and how you could collaborate or compete. The people you were surrounded by, what you wanted from them and what they wanted from you, at various stages in your career.

Everyone had to come there and bring their talents and abilities, their connections and, yes, their…guts. Risk-taking was a key element.

Same with Silicon Valley. Lots of genius and very little fear about things not working out. The fearful geniuses mostly went into law or political science. The fearless set about inventing things in California and raising money before they knew if any of it would actually work. Success begat success. The word spread. The money spread too. If you wanted to make yourself useful to smart, successful people, these two places became two of the best destinations to do so in the history of the world.

And if things worked out – no sure thing –  you stayed. The success you’d enjoyed became an advantage around which many more subsequent successes would agglomerate. All the best games in this world are games of cumulative advantage. And then, before you had even realized it, you’d become middle-aged. How did that happen? And soon after, younger versions of you would come along and make themselves useful to your endeavors. It continues to this day.

November, 2017. When I met Nick Maggiulli, I was just about turning that corner from being someone who had made himself useful (to Barry Ritholtz, another story for another day). I was on the cusp of being in a position to surround myself with the next generation and have them carry me to the next rung. To offer some young, successful, smart people some benefit of being in the vicinity of myself. You don’t always realize it at the time, but that’s what it was. Nick flew to New York on his own dime to attend the Evidence-Based Investing Conference in New York City. He didn’t work in finance. He’d never had a job in wealth management or trading or investing of any kind. But his interest in the topic was intense and highly focused. He wanted to use his skills as a data analytics professional to research and learn everything there was to learn about investing and then share it all with the nascent readership of his blog.

It was a great event – Liz Ann Sonders was there. Cliff Asness. Scott Galloway. We celebrated the tenth anniversary of Jason Zweig’s seminal book on behavioral investing and had him sign a few hundred copies. But the highlight, looking back, was that we got to meet Nick in person. He came out to dinner with the whole Ritholtz Mafia that night (Tribeca Grill) and professed his interest in getting a job with us, right on the spot. That was the real mission, beyond meeting some of the other blogging superstars he was increasingly becoming associated with online – people like Morgan Housel, Phil Pearlman, Ben Carlson, etc – we had everybody there but Nick had a goal in mind, even if he didn’t know it. 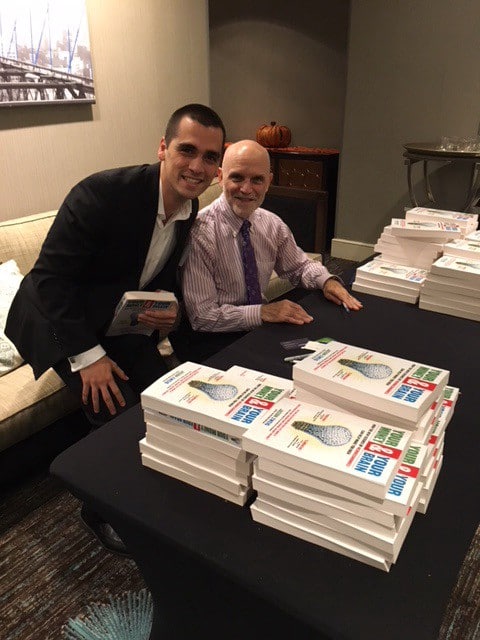 Only seven years prior to that moment, I had flown across the country to meet Howard Lindzon and Barry Ritholtz in San Diego for a career opportunity. I was nowhere and that was the light at the end of my tunnel at 30 years old. I immediately saw something of myself in Nick’s desire to do what he loved and change his life. I was him, once upon a WordPress login.

I want to move to New York City. Amass a big readership as a finance writer. Learn the ropes on Wall Street. Help build a firm. I can do stuff you guys need, stuff you don’t even know you need. I can code. I can program.

Sure, kid. We need you. You’re hired. Don’t even know what to call your job, make up your own title.

How about “analytics manager”?

I have to finish up this consulting project for the O’Shaughnessy guys. How about June 25th, 2018?

LOL. We have one trader at the time, no chief of compliance, no one answering the phones half the day (west coast clients calling at 5pm their time were going to have to wait awhile back then). We don’t quite have all the pieces yet…but we have a Nick! You can do a lot of things with a Nick, it turns out.

A few years later he becomes Chief Operating Officer. Every artery and vein running through Ritholtz runs through his fingertips. All the systems, all the data, all the web traffic, all the software APIs. Thousands of accounts, hundreds of programs and platforms. He’s conducing it like an orchestra from a standup desk in Bryant Park. While still turning out one of the most high quality, consistently published blogs in all of finance every Tuesday like a Swiss watch. I don’t think he’s ever missed one. Of Dollars and Data is a full-blown institution. No one else in the field can do what he does, this mellifluous combination of  unassailable data, historical perspective, shimmering chartsmanship, personal finance and plain-spoken English. Yeah, he’s smart. But a lot of people writing about these topics are smart. What’s special here is that Nick makes you feel smart too.

And this week, he is a published author. Nick’s first book, Just Keep Buying, hit the Amazon store yesterday. It’s a major milestone in any young writer’s life. I remember how it felt when my first book was coming out in 2012. That time for me was a decade ago. That time for Nick is today. Now. I texted him last night to enjoy the moment. I know he is. You can be a part of Nick’s big moment by grabbing your copy today.

We bet on Nick. A smart, successful young person who wanted to make himself useful to what we were doing. It was an easy bet. The payoff has been beyond anything we could have reasonably expected at that time. We will continue to bet on Nick just as, someday, Nick will be in a position to bet on future versions of himself who come along. And it will work. That’s it. That’s everything you need to know about making it.

As for what to do with all the money you’re going to make as a result, Nick’s book is the first thing you should read on the topic. 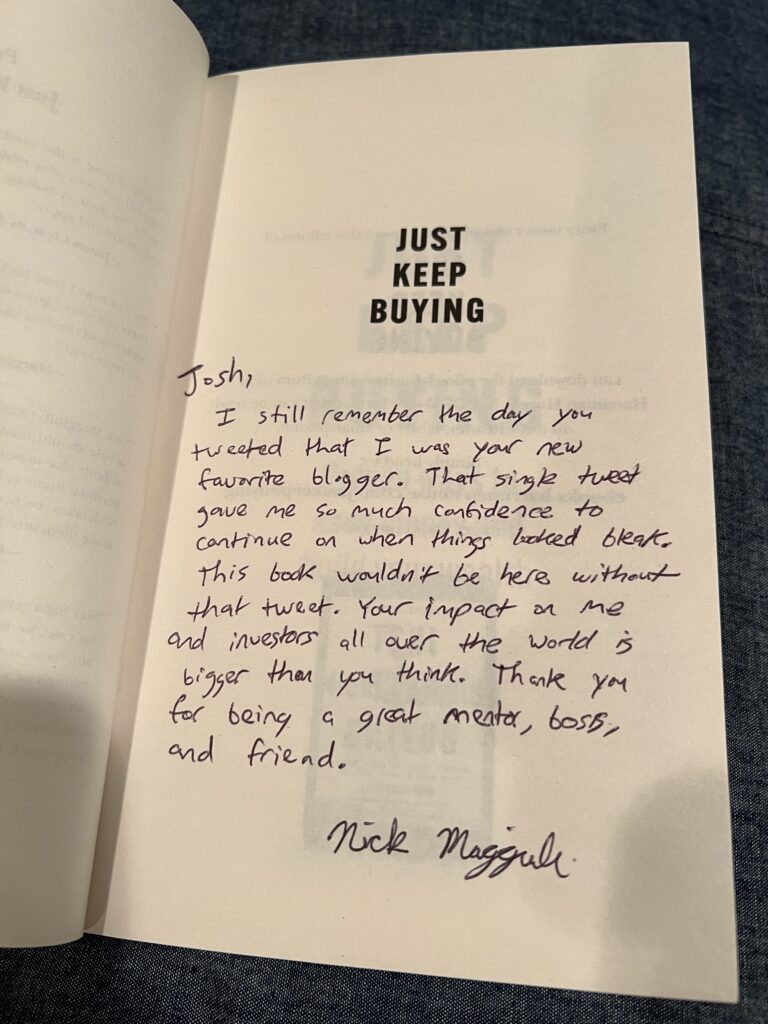 Congrats, kid. You did it.