I keep saying things like “the party is over” and that the correction has a while to go and that “we’re in the midst of a bear market” and that these little one or two day rallies are really just a good time to “unload some pain” and nothing more.

But people don’t want to hear this. There are massive losses out there from the top in some of the most popular growth stocks. The idea that it’s not done yet is a difficult concept to swallow. 70% of the Nasdaq is in a 20% drawdown or worse. 20% of the Nasdaq has been more than cut in half. And every week it gets worse not better. People want to hear “Buy the Dip!” Life was so much simpler when that was a clockwork proposition. Now the dips have dips. It’s not working at all. It’s actually making things worse for a lot of folks. A stock that gets cut in half can get cut in half again and then again. It’s so painful.

And this is what bear markets have to offer, in spades. One disappointment after another.

This is going to sound overly simplistic but I promise it’s the only intelligent thing to be said on the matter: The bear market will end when stocks stop going down.

I warned you it was going to be somewhat unsatisfying.

It’s not terribly helpful, but it’s more useful for you than anyone’s forecast. You have to trust me on this – I know the people making the forecasts. All of them.

We don’t predict bear markets. We manage money as though they are a normal part of investing, happen during every decade and differ in length, breadth and depth depending on what they’re being caused by. And while we do not attempt to anticipate them, we do manage a portion of our clients’ accounts tactically. This is necessary for many of our households because we’re talking about people’s life savings on the line. The older you get, the more unlikely it is that you can rebuild a career or continue to dollar cost average through these moments that, for younger folks, would be characterized as major buying opportunities.

The current bear market will, in time, be seen as one of those major opportunities for those who continued to invest in the face of all the various fears currently occupying the headlines. But that’s in the future. Right now, it may not feel that way at all. It feels like this, a downtrend gradually sapping the investor class’s enthusiasm away, drip by drip: 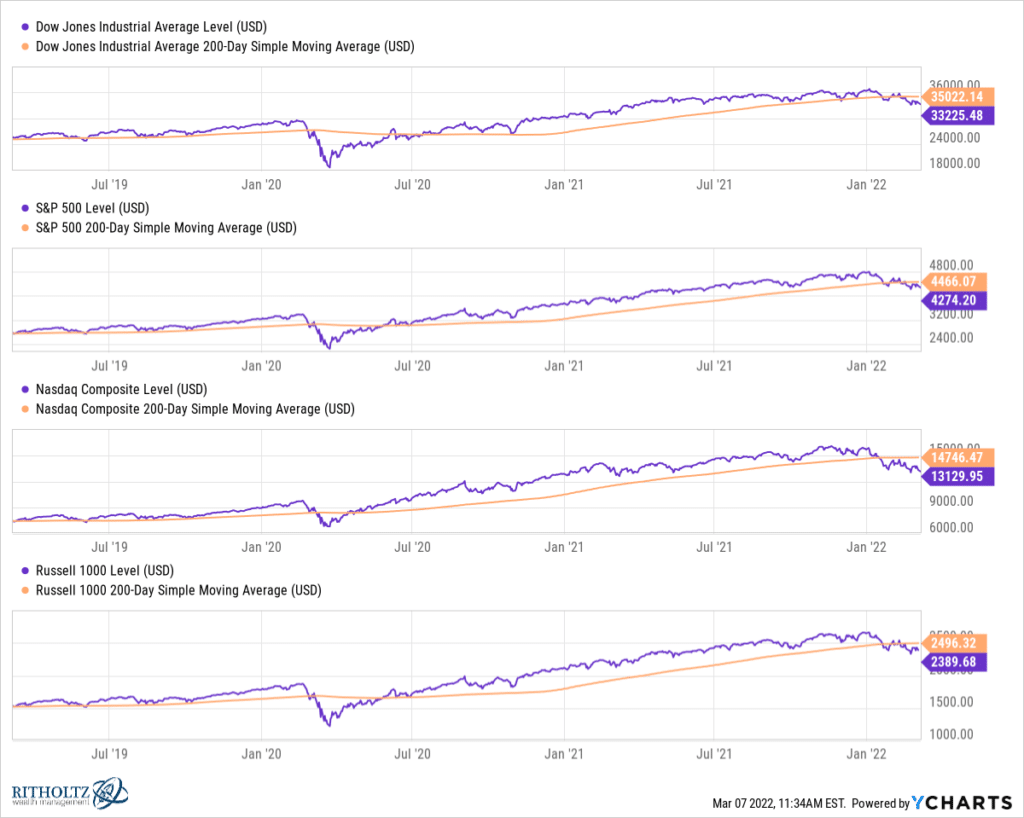 In some ways, this is much worse than a crash. It’s a bandaid being slowly pulled off with all sorts of false hope along the way.

The index statistics haven’t yet caught up with the reality of the internals – the market of stocks looks and feels way worse than the stock market. You can thank Microsoft and Apple for that.

Don’t be fooled by a technicality. This is the real thing.