The doubts are piling up. Nasty price action is confirming all of our worst insecurities about the state of the world. Which is why this business of investing for the long-term is so hard. As my colleague Michael often says, nobody lives in the long-term, we live in the moment.

Ben Carlson compiled a neat little list of the items everyone is concerned about at the moment:

Obviously a lot of these things are causative of each other and interrelated. That’s fine. He’s missing some stuff, like the midterm elections later this year, in which Republicans are likely to capitalize on the crime waves affecting large cities from coast to coast and the inflation story, which will have calmed down by this coming fall in terms of rate of change even while prices do not return to pre-pandemic “norms”. This will produce consternation and headline volatility and the rest of what comes along with these events.

I would argue that while “the consumer remains strong” we should not discount the effects a falling stock market and stalling real estate values might have on the wealth effect which has been so important to our economic recovery. Cooling this effect down without extinguishing it entirely will not be easy. Unfortunately, the Fed is not working with a scalpel, it only has a shotgun.

Plus you got Kanye still out there running free, completely unhinged, untethered to reality. We don’t fully understand what a man in his situation is truly capable of, god help us all.

Anyway, I wanted to point to two very important posts my crew has put up this week because I think you’ll get a lot out of both of them.

First up, Ben talks about the three things you can do during a market correction in order to win.

Second, if you’re so sure stocks are overvalued and have so far to fall, tell me: When was the last time the market actually traded at what you might consider to be “fair value”? How far away are we from being fairly valued and what’s different today versus back then? Don’t miss Nick Maggiulli’s new one, read it here.

I’ve been asked two dozen times about “What’s gonna happen with Russia?” in the last week or so. Like, stopped on the street or DM’d on Facebook. I tell people the truth: I am reading all the same news in the Times and the Journal that you are. I don’t think anyone knows what could happen.  I know how unsatisfying an answer like that is, but that’s how you know it’s true. I’m focused on investments, with the understanding that the geopolitical picture will impact those investments, but to an unspecified degree and for an unknowable length of time. This is that “Uncertainty” you’ve heard so much about. And rather than talking a lot about it, I’m reading.

Here’s Ryan Detrick (LPL) laying out the last big geopolitical events in this table, along with the amount of days it took for the stock market to bottom and then the amount of days til recovery. Probably not as dire as you may have thought before seeing it, right? 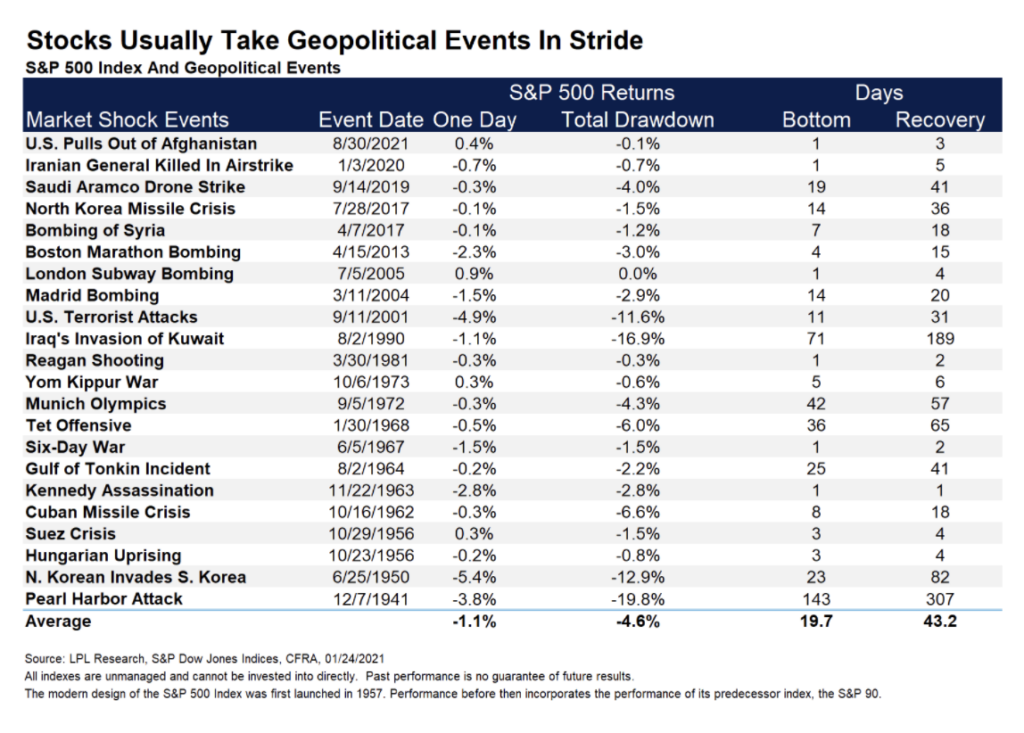 Every one of these events would have represented a great reason to sell in the moment, had you been around for it. All of those sales would have been regretful not long after. If the stock market only required 31 days to fully process and recover from the horrors of 9/11, could anything that happens on the Eastern border of Ukraine become more impactful? It’s hard to imagine.

Following reasonable people who write with evidence and do not pretend to be experts in subjects like Ukrainian military strategy is probably your best bet right now. And, take it from me, it’s easier to process new information and formulate sound judgments about things when you’re not simultaneously running your mouth.