The title of this post is an in-joke. My fellow financial bloggers may giggle because they understand that there’s actually no such thing as “a normal year” for the stock market.

There’s no normal version of a David Bowie album. Every record was a new look, a new sound, a new concept, new instrumentation, new production techniques. Compare Hunky Dory with Ziggy Stardust and then Young Americans. These records all came out within five years of each other in the 1970’s and could not have been less alike. Which one is the “normal” Bowie album? The late 70’s records made in Berlin are an even further departure. And then those 80’s albums came along and they were like the output from an entirely different artist.

There’s no standard version of a year in stocks either.

Average annual returns for the S&P 500 are high single digits but you are actually more likely to see a 20% annual return than an 8% annual return in any given year. Look it up. Averages are formed by widely disparate outcomes. Normal is a pipe dream. You wish you had a normal outcome to bet on.

So this year was as “normal” as you’re going to get when viewed through that lens. The only rule is there are no rules! There will be people referring to it as an abnormal year but that’s because they’re salty. Options trading gurus and pretend hedge fund managers despise any market environment in which a typical investor has been able to outperform their convoluted bullshit by keeping it simple. That’s exactly what this year’s market environment was. Simple diversification and a cast iron stomach this July during the onset of Delta variant got the job done.

Simple but not easy. We can help you, by the way – just reach out and ask.

Disregard anyone telling you that the gains you’ve earned in the stock market this year deserve any sort of asterisk or qualification. It’s been a fairly normal year in terms of the distribution of gains. The FANGs did well but so did a lot of other areas of the market.

Yes it’s true that Apple, Alphabet and Microsoft are three of the largest stocks on earth and added hundreds of billions to their market capitalizations this year. But lots of stocks went up big right alongside them. The narrative that these five did all the heavy lifting alone is false.

Let’s do some charts… 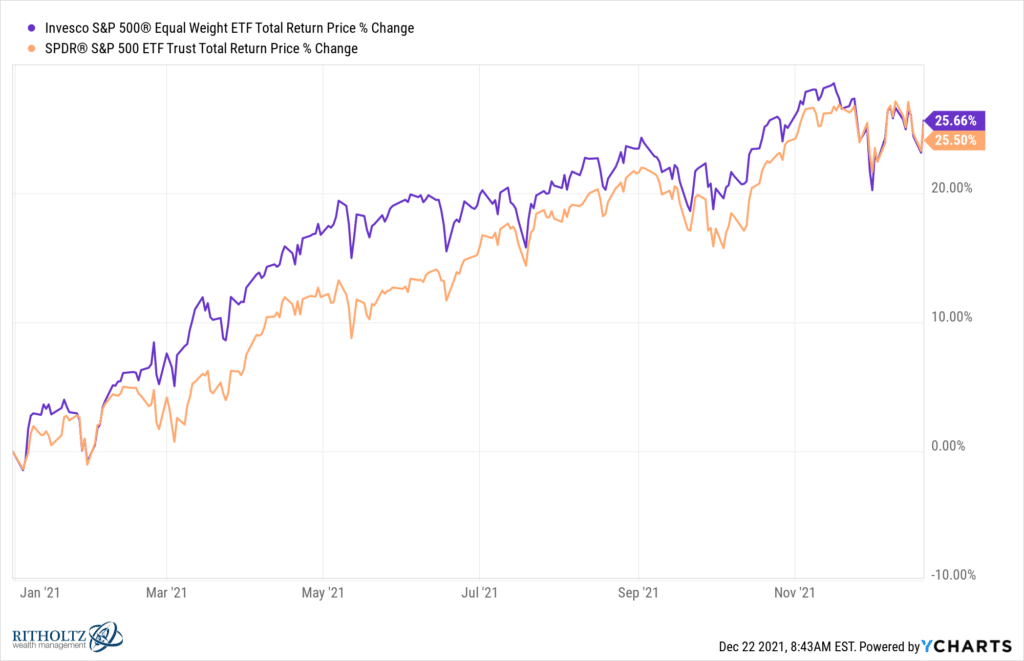 Identical. Nothing to talk about. In fact, the rest of the FANGs actually underperformed the equal-weight S&P 500. Here’s Amazon, Meta (Facebook) and Netflix versus that benchmark: 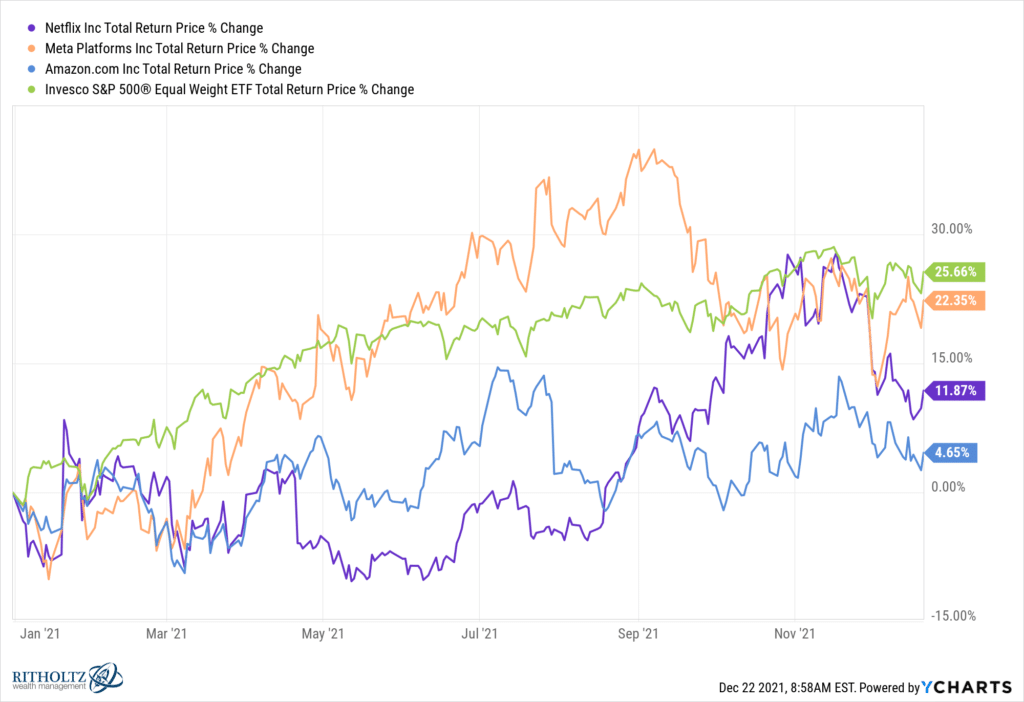 The Nasdaq 100 is a different story. Look at this year’s biggest Nasdaq leaders versus the equal-weight Nasdaq 100 (QQEW) and you can see that the megacaps really ran away with it in 2021: 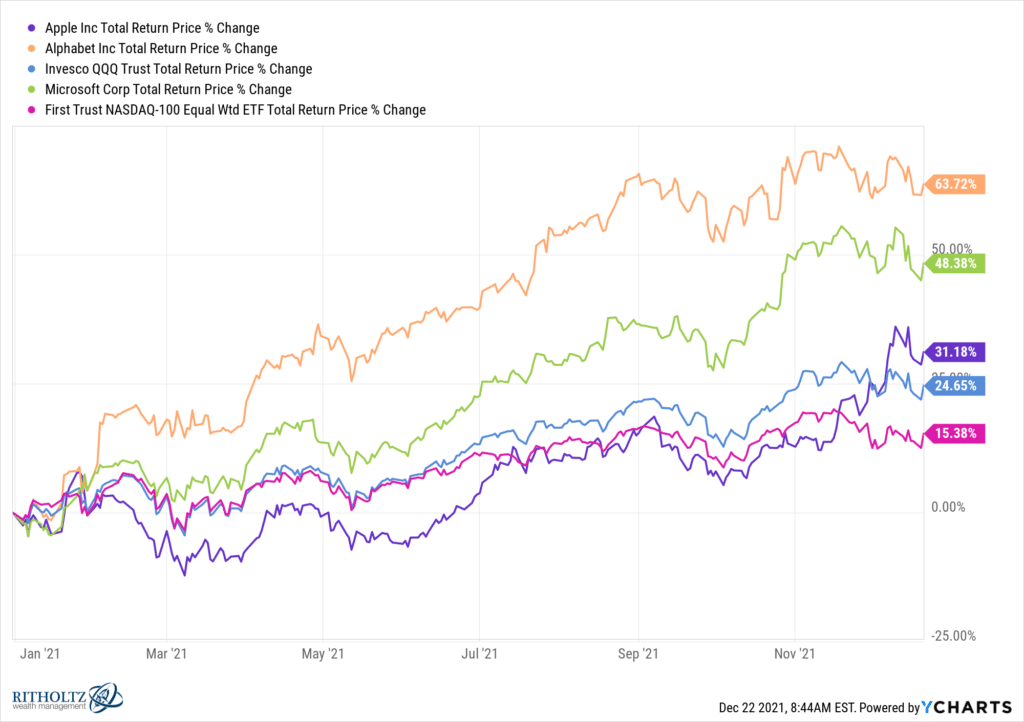 Observe how that pink line at the bottom – an equal-weighted version of the Nasdaq 100 – trailing far behind it’s market cap-weighted cousin in light blue, let alone Apple, Google and Microsoft. This doesn’t, however, mean that the rest of the Nasdaq 100 components had a poor year. The best performing stock in the S&P 500 this year is Nvidia (+108%), which is a big Nasdaq 100 component as well. In fact, there was only one FANG name in the top ten Nasdaq performers this year (Alphabet) and it’s only number 8 (and nine, owing to a second share class): 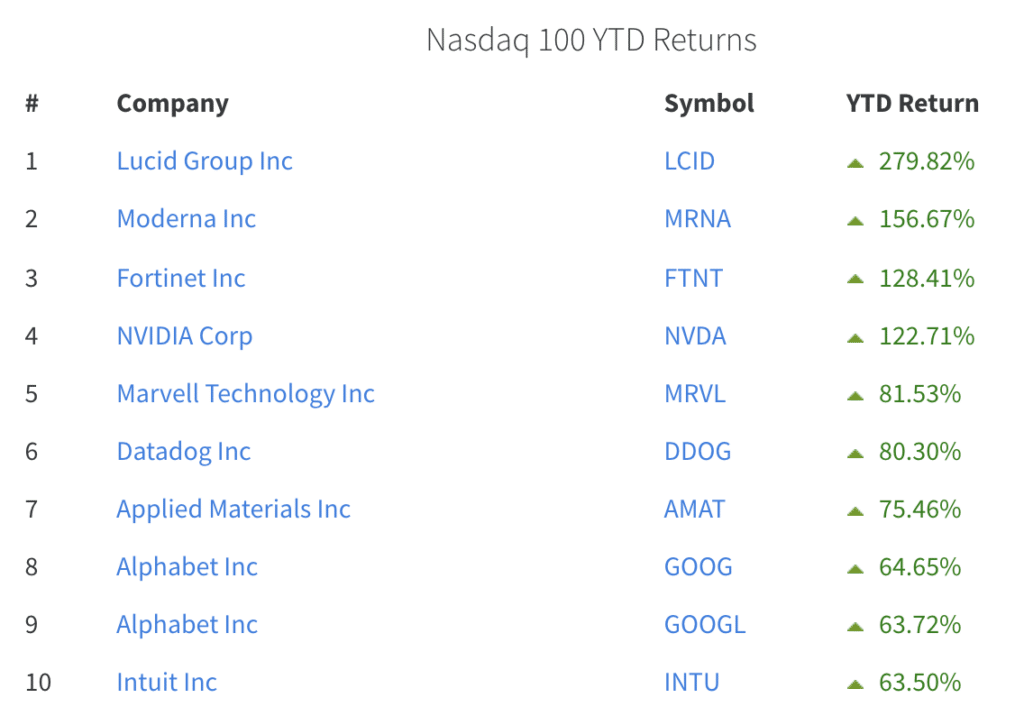 Michael and I pointed out that dispersion – the difference in performance among all of the market’s individual stocks – started the year low (remember how wildly speculative January and February were? Stonks!). But then dispersion began to rise in the spring and has hit its high of the year right here at the very end. Which means stocks within the indices are doing very different things from each other rather than moving in lockstep.

You can hear more about this phenomenon and what it might mean by watching last night’s all new episode of What Are Your Thoughts below: