Imagine Lockheed Martin not doing well during a World War. Tough to see how that would be possible. Imagine Clorox having a touch time during a pandemic. I don’t think so.

US home prices have skyrocketed by 20% over the last year. Remember, that’s just an average – in some major markets they’re up way more. Housing is on fire. Especially single-family homes. Especially in the suburbs. Which suburbs? All suburbs.

And somehow, the nation’s largest digital real estate conglomerate is managing to fail miserably in the midst of this runaway real estate bonanza. It’s mind boggling. Zillow is a disaster. Below, a chart of the C Shares “percent off high” – you can see the stock is in the midst of a 65% drawdown, having seen two thirds of the value of the company wiped out in six months. 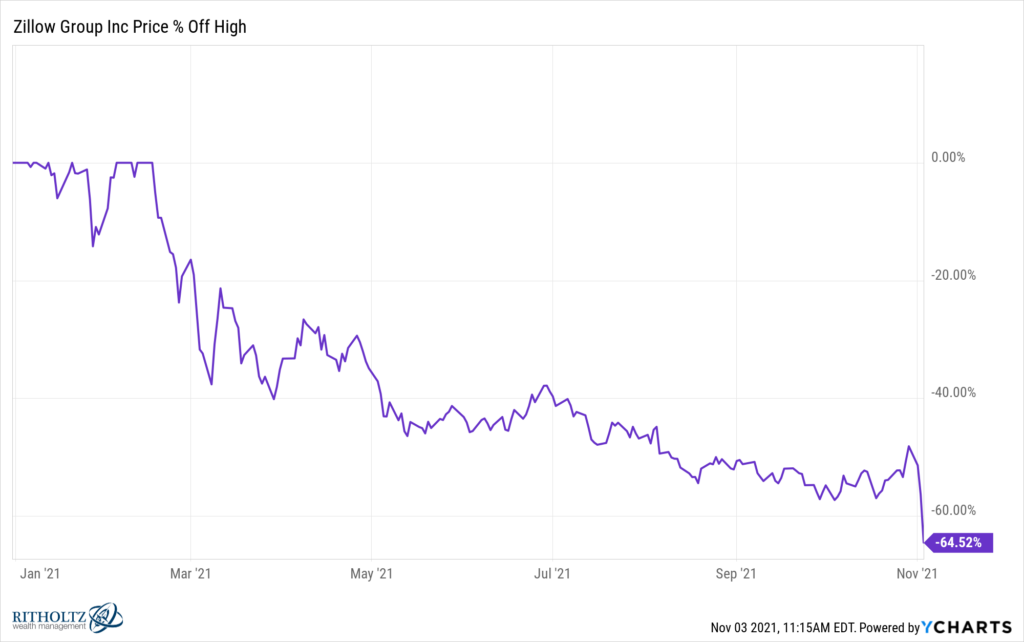 I bought and sold Zillow in the low 90’s / mid 80’s. I lost some money. That’s okay, don’t shed any tears for me, I’ll be fine (I talked about getting this stock wrong on YouTube when I sold a few weeks back, watch it here).

Trading is trading, but long-term shareholders are looking at serious losses. Zillow’s market capitalization was approaching $50 billion dollars earlier this year, just around the time the company’s prominence in the nation’s lockdown-era consciousness was being lampooned on Saturday Night Live (watch it here). It turns out that was the top. Now it’s got a market cap of around $18 billion. That’s a lot of money wiped out.

Oh boy. You can read the rest at MarketWatch if you want to.

And there’s no help in sight.

Zillow has three classes of stock. The A shares, which have voting rights, trade under the ticker symbol ZG. The B shares, which are owned by controlling shareholders and founders, have no ticker symbol because they do not change hands. The C shares (ticker: Z), which are the most commonly held and widely traded, have zero voting rights. Guggenheim’s investment bankers helped Zillow’s founders create them in the summer of 2015 in order to keep pesky outsiders from obtaining board seats or influencing the direction of the company. The New York Times and Alphabet both have this sort of structure, which insulates these companies from Carl Icahn or Dan Loeb coming in and wresting control of the steering wheel. Many Silicon Valley companies have done this in recent years. They claim this is necessary to prevent the short-term thinking Orcs of Wall Street and Boston from forcing the company off course for the long run. Visionaries need time for their visions to pan out. I sort of buy it, but not always. And definitely not in this case.

So the C shares, which are in free-fall, only represent an economic interest in the business but don’t allow the holders to have any say. In good times, this is a beautiful thing. They can use the C share class to issue stock options and employee rewards, plus they can issue an infinite amount of shares in order to make acquisitions, without diluting the voting control. In bad times, however, this structure prevents the sort of outside perspective or change that a struggling company might require.

Look – the CEO, Richard Barton, took a shot on iBuying and it didn’t work out. It’s okay. The CEO is supposed to try things. It turns out that the realtors who were mocking automated home buying and selling were right. This is a tough business and it often requires an insider’s knowledge of the local market. An algorithm has limitations. I would also mention that this might have been the worst possible environment in which to start buying houses given how high the prices have gotten. I would imagine being an iBuyer in a down-market would be much more advantageous. Doing your purchasing when no one else is trying to purchase and then holding your inventory for a sunny day is a smarter strategy, but this requires balance sheet fortitude and extremely patient investors.

I would also point out that Barton is experiencing this pain alongside his shareholders. He owns 15 million shares. Nobody has lost more money in Zillow this year than he has.

Zillow shareholders thought they owned a technology company, not a housing REIT, so they didn’t like the strategy from the outset and were skeptical that iBuying was going to be a profitable pivot. The core business – selling leads to realtors and housing related advertising is much better than iBuying. This week’s shocking losses gave people the confirmation they needed that something is just not right here.

Disappointed shareholders have no recourse other than selling. This is one of the drawbacks of having an insulated management team.