“All through time, people have basically acted and reacted the same way in the market as a result of: greed, fear, ignorance, and hope. That is why the numerical formations and patterns recur on a constant basis.”

Jesse Livermore said this a hundred years ago. It’s still true. But I want to modify it somewhat to account for the things I am seeing on a daily basis out there. I used to think of Fear and Greed as being the fear of losing money and the greed for making more money, but I have come to understand that it is not that simple.

The Fear I see these days is a fear of becoming a relic of the past. A fear of seeing your peers catapult themselves ahead of you. A fear of missing out, which has been well documented and has become the spirit of the times we live in. This has come to be as a result of the Nasdaq having gained an average annual 25% since the end of the last real bear market in 2009 – a 1500% return. Add on the hundreds of billions of dollars that have been flooding the private markets, creating a new class of mega wealthy while regular folks do not even get to see a ticker symbol or a price quote. Then add on the overnight billion-dollar fortunes for the crypto people as we watch the largest mass wealth creation event in the history of mankind taking place right before our very eyes.

The type of fear that now drives most market activity (because it drives most market participants) is something different than the fear we’ve been accustomed to from reading about history. I would label this type of fear Insecurity. The fear of being left behind and looking like a fool. It’s no surprise that Have Fun Staying Poor or #HFSP has become one of the most enduring memes of the moment we’re in now. It’s the anti-Keep Calm and Carry On. Whenever you see people doing inexplicable things with their capital in the markets these days (public or private), the explanation is not as far from your grasp as you might think. Insecurity is probably the answer.

The other driving force in the markets, traditionally, has been Greed. I think we’re witnessing a variation on Greed that I would label Envy. I spent 15 minutes on Financial Twitter yesterday for the first time since the spring of 2020. It’s everywhere. Almost every interaction I saw on my timeline was tinged with it. Just skirmishes and drive-by eggings and curb stompings.

Even the people winning – that’s not enough for them. The money is beside the point. They also need others to feel the pain of not having been right. I told you so, should’ve listened to me. The public victory laps and displays of haughtiness seem almost purposely staged to provoke hostile reactions from the crowd. Like it’s a sport. And fortunately for the engagement metrics, there is no supply chain shortage of bitterness to bring about this desired reaction. We have an infinite well of it from which to draw. If you’re looking for problems in your life, tweeting about your wins is a really convenient way to produce them. It has never been easier to get a thousand strangers to viscerally hate you and wish for your demise. Other than that, it’s a lot of fun.

Envy will make you take wild risks with a portfolio. Especially when all you see around you are so many people you have such little regard for profiting off of things you know they themselves barely understand. The more exposure we have to the way others are investing, the more we begin to look at their returns as though that’s the appropriate benchmark. All sense of reason and perspective is left behind. If that asshole is doing it, I can do it better. We have an entire class of stocks today that are invested in under the premise that the other people involved in them are bad people who don’t deserve to make money on either the long or the short side. It’s a Massively Multiplayer Online Role Playing Game (MMORPG) like World of Warcraft. That’s not investing anymore. It’s something else. On the Reddit boards, you can see how much of the emphasis is on those people losing as opposed to our side winning. It makes no sense until you start thinking about it in video game terms.

Livermore also said “There is nothing new in Wall Street. There can’t be because speculation is as old as the hills. Whatever happens in the stock market today has happened before and will happen again.” And I think that’s still true, but with a twist. Livermore had a few dozen men playing alongside him in the bucket shops of Boston, or a few hundred men on the stock or commodities exchange, where everyone knew each other and saw each other in person each morning. You had rivals, and counterparties you saw as the enemy, but it was small and it was close quarters. A knife fight. This thing today is nuclear war. No survivors. It’s a Squid Game event on a global scale. Millions of nameless, faceless strangers in an online environment that literally knows no spatial or geographic limitations. It’s an environment in which the wealthiest, most successful players like Chamath and Steve Cohen can be publicly – daily – accosted by the mob throwing fistfuls of horseshit at them from the alleyways. I don’t know if the heuristics Livermore played the game by would be so easily applied now.

Bloomberg has an index that calculates the rising and falling wealth of the world’s billionaires in real-time. Imagine sitting in your truck in the parking lot of a Walmart looking at that on your phone while your wife runs in to get detergent. While Nathan Mayer Rothschild was racking up his fortunes on the bourses of London and Paris in the early 1800’s, 99.99% of all people living on earth were wholly unaware of his existence, let alone the hourly exploits of his market speculations. Today we learn about rappers making reaping ten-figure profits on IPOs via text alerts from TMZ.

And in the midst of this miasma, with trillions of dollars being accumulated in full view of everyone, it’s no surprise that two feelings consistently bubble up to the surface – Insecurity and Envy – over and over again. Why am I falling behind? Why is that son of bitch not?

You can practically feel it in the air. 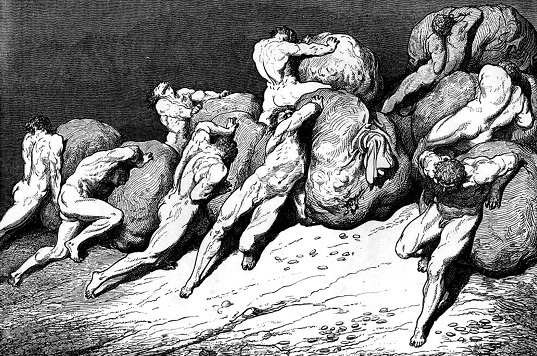 In The Divine Comedy, Dante and Virgil arrive at the Fourth Circle of Hell and come across the souls who are being punished for their greed. They are broken up into two distinct groups – those who hoarded their fortunes and those who ostentatiously spent too much and lived lavishly. The two sides are engaged in an eternal jousting match. They attack each other with giant weights pushed from their chests, a metaphor for their relentless drive toward wealth while they were alive. These tormented souls are so busy with this activity that the poet and his underworld guide do not even bother attempting to speak with them.