Many corporations and small business owners, while observing their own difficulty in hiring people or getting them to show up for work, pointed to increased federal unemployment benefits as being the prime culprit for their struggles. And understandably so. There was a period of time in 2020 where, for many workers, it just made no sense to go back to doing a job for less money than what the government was paying you to stay home.

But that ended in 2021 and, in its place, there was a new special unemployment benefit from the Federal government of $300 per week, cut in half from the original $600 per week. Just about half the states in the country opted out of providing this enhanced benefit while half participated. The difference in employment between the states that left the program versus the states that didn’t turned out to have been negligible. No difference.

Economists who have conducted their own analyses of the government data say the rates of job growth in states that ended and states that maintained the benefits are, from a statistical perspective, about the same.

“If the question is, ‘Is UI the key thing that’s holding back the labor market recovery?’ The answer is no, definitely not, based on the available data,” said Peter Ganong, a University of Chicago economist, referring to unemployment insurance. 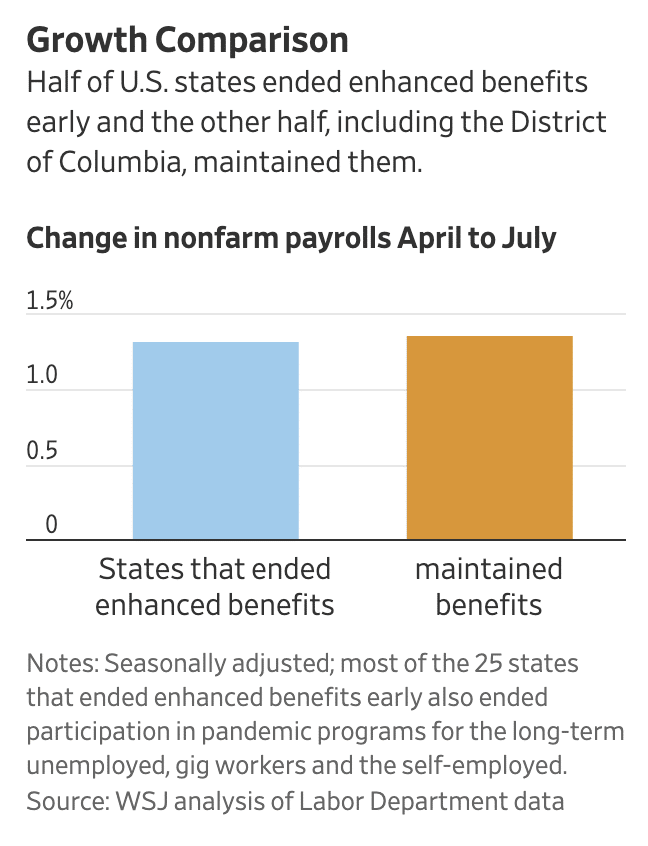 The enhanced unemployment benefits are now winding down and the children are going back to school in-person. There are no more reasons for why an employer should not be able to hire people to fill open positions. So long as they are paying a living wage, with decent benefits and a hospitable working environment. If you’re asking people to earn below-subsistence money for a demeaning job in unhealthy, potentially dangerous circumstances, that might be a bit tougher. You might want to consider robots or improving the working conditions of your employees.

The 10.1 million open jobs stat is breaking my brain. If you can’t find workers, you’re not offering enough money or pathway to future opportunity. If you’re claiming they don’t have the skills to do what you need done, time to invest in training. And you might have to get creative on compensation. The expectations are now shifting. More workers are asking to be paid at the end of each week or even at the completion of a day’s labor. They’re asking for more flexibility in how their hours are set, and partial days of work over 40 hour weeks. Your accounting and payroll systems may need a refresh to adapt. But adapt you must, as must we all.

After this month, you won’t have unemployment checks to blame.

And remember that many of your employees – your most talented employees – are gaining a bit more of the upper hand these days. In the age of smartphones, peer-to-peer payments and cloud computing, they might have more options than they used to. They might become your competitor: 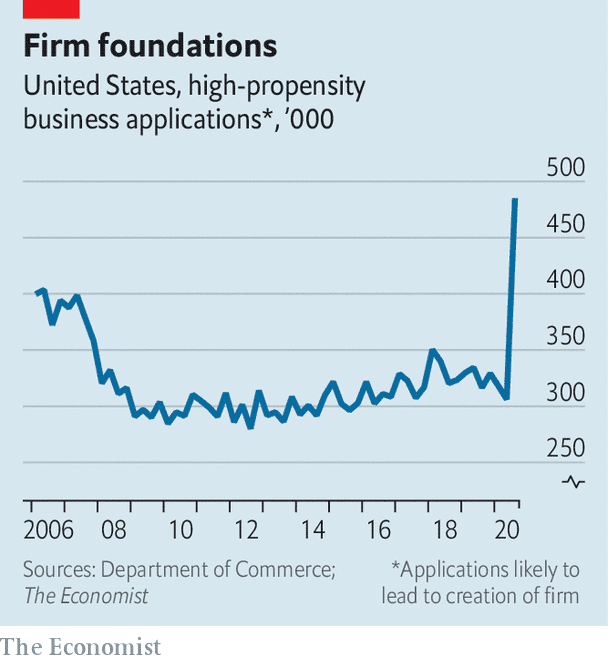 The number of new businesses in America is booming (The Economist)