Ben Carlson took a look at the fact that in the fifteen months since mid-March 2020, the S&P 500 has doubled on a total return basis (includes dividends). 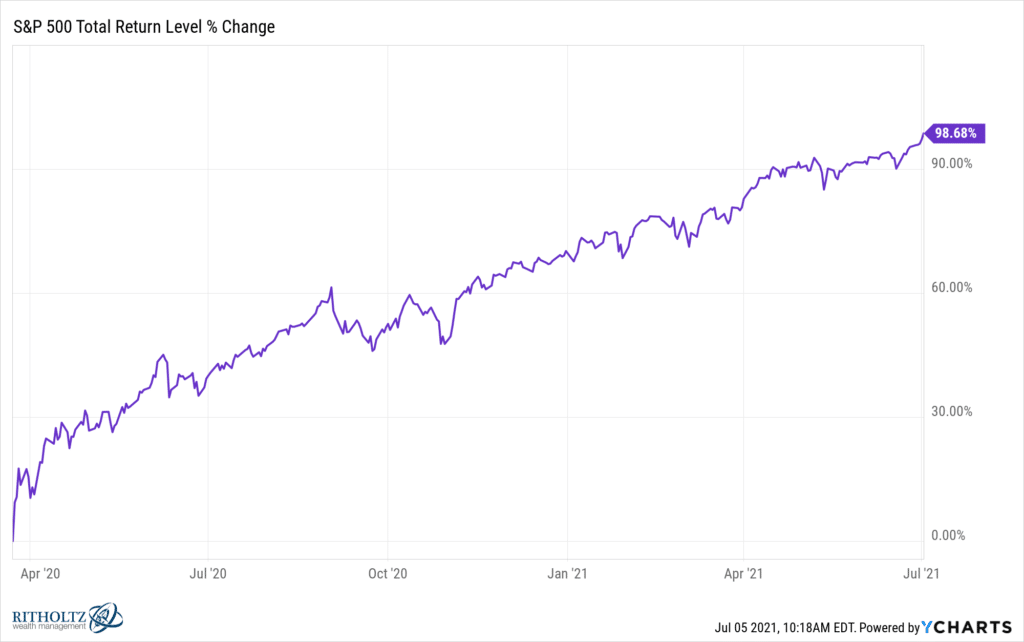 Ben found that this has never happened before, this fast, after a crash, outside of the 1930’s. In the early 30’s, stocks had fallen ninety-something percent (!) from their peak, of course the bounce back is going to be every bit as vicious.

Last year’s crash was triggered by a natural disaster, which is what a pandemic is. This has happened before. Jesse Livermore traded through the 1906 San Francisco earthquake (and associated stock crash). Three thousand people died, a quarter of a million people wound up homeless, 80% of the buildings in that city had burned to the ground. Jesse was short-selling Union Pacific, covering and then shorting again as the market bounced around and the economic recovery gained and lost and regained steam, no pun intended. We don’t have perfect stock market data from this episode, but it is believed that stocks had seen a billion dollars of value wiped out before the market bottomed, which used to be a lot of money. These days Jeff Bezos makes another billion dollars in the time it takes him to brush his teeth.

Which is sort of the point. Time goes on, the dollars get bigger,

I don’t think there’s a hurricane, earthquake, tsunami, typhoon, disease outbreak, landslide, avalanche, forest fire or flood that could keep the US stock market from staging a furious rebound once participants have had a chance to recognize the inherent opportunity that these sorts of events always create. We’ve just lived through a pretty bad one, on both a relative and absolute basis. And here we are 100% higher in less than a year and a half. Someday, the final asteroid will come crashing through the atmosphere, thudding into the earth’s surface to set off the extinction-level event. Someday we’ll go out dinosaur-style. The better bet, however, is to say Someday. Not this day.

Our takeaways from this period ought to be the following:

1. Even if I gave you March 2020’s headlines in January of 2020, you still would never in a million years have known how to invest based on them. You’d have had eight weeks to prepare for millions of deaths and the shutdown of the global economy, and no one would have predicted this outcome. They’re lying if they say they could have.

2. Corporate America is filled with Type A (and even Type Double or Triple A) personalities. These people don’t sit back as a pandemic (or any other damn thing) takes hold and do nothing. They don’t accept defeat or sit on Twitter whining about how hard everything is. The type of people who make it to the top of the largest publicly traded companies in America – for all of their flaws – do not f***ing surrender. Nor will their shareholders allow them to. For every action there is a reaction. Business leaders in this country took the opportunity to remake their companies and retool for the new environment almost overnight. The acceleration of digitization has been absolutely remarkable. You’re welcome to line up your bets against American capitalism in the short-term. But in the intermediate- to long-term, you will lose.

3. The Fed and Treasury are now a tag team in crisis. The bears missed this or didn’t factor in the extent of how powerful the combination is.  When Monetary and Fiscal policy work together and throw the kitchen sink at something, you should probably not be overthinking things.

4. Nobody made any money by becoming an armchair expert on viruses or obsessing over the epidemiology. We made money by asking ourselves, rhetorically, some really dumb questions, like “are people still going to drink coffee next week?” or “will people still need cars and houses?”

5. You might want to reexamine some of the sources of information you’ve been following over the last year or so. If you’re paying subscriptions to macro genius brains who’ve been talking you out of taking the appropriate investment risks, it’s time for an information cleanse. Fool me twice, shame on me. These people are guessing like everyone else and making up bullshit to put in their email blasts. The fact that they embroider their bullshit with statistics and jargon doesn’t change anything.

6. Some rallies are missable, but sitting out a double in fifteen months is hard to recover from. Fortunately, retail investor participation has been high throughout the pandemic. Maybe they should cancel sports during the next recession to keep people investing. I’m kidding, sort of.

7. People who are unlicensed, unregistered, have no clients to answer to and no money under management are dangerous sources of news and opinion during a crisis. The more extreme their pronouncements, the more attention (clicks) they get. And attention is what they feed off of. Which means you cannot let yourself be susceptible. Unregistered people do not have any responsibility to back up the things they say publicly. They’ll claim first amendment rights after shouting fire in a crowded theater. You’ll find that people who actually have someone to answer to and some responsibility to speak factually may be wrong or right in their opinions, but at least there is some grounding in reality.

There will be more natural disasters that hit the stock market hard and force the government to spring into action. Sometimes the response will be muted and sometimes stronger than you could possibly imagine. There will be more moments where investing seems terrifying and the wrong thing to do. In these moments, there will be people who feed off of your fear and uncertainty for their own benefit by saying the least helpful shit imaginable just to get your attention.

You will have to fight through those moments and remind yourself that all natural disasters throughout history have represented incredible buying opportunities for investors. Maybe not immediately, but eventually. Every single time.

Read Ben’s piece for a history of stock market comebacks from crashes:

How Long Does it Take For the Stock Market to Double Off a Bear Market Bottom? (A Wealth Of Common Sense)