JPMorgan’s Asset Management piece this week looks at new recovery legislation just passed, what role the Fed will be playing in the recovery and more. I thought this bit about real rates and the reaction in S&P 500 stock prices was interesting…

The recent backup in long bond yields—even if they are rising for the right reasons—has investors concerned about the level of rates that become punitive for stocks. Our long-term analysis suggests the correlation between the weekly changes in nominal long-term interest rates and large cap equity performance begins to turn negative when the nominal 10y Treasury yields rises above 5%. However, over the past decade, the same analysis suggests that the threshold level of rates is closer to 3.0%-3.5%, which seems more realistic given the impact of QE. For investors, we are still far from that point and an improving economy and robust earnings recovery across all sectors should dominate equity market performance over the next 12 months…

So far, the Fed has shown no signs of wanting to react to the backup in longer dated Treasury yields. Overnight rates are sticking at zero for the foreseeable future while the 10-year and 20-year Treasury yields rise. The steepening is significant and reflective of an expected environment in which inflation runs a little hotter as growth picks up. The Fed has said as much – they’re going to react, not proact (I know, it’s not a real word).

So what does this mean for stocks?

As highlighted in Exhibit 2, so long as growth remains supported and/or monetary policy remains accommodative, this dynamic should provide a positive backdrop for equities, even if the move higher in real rates is faster than anticipated. With that said, we expect stocks may come under pressure as real yields approach zero and move back into positive territory, after trending negative since mid-2018. 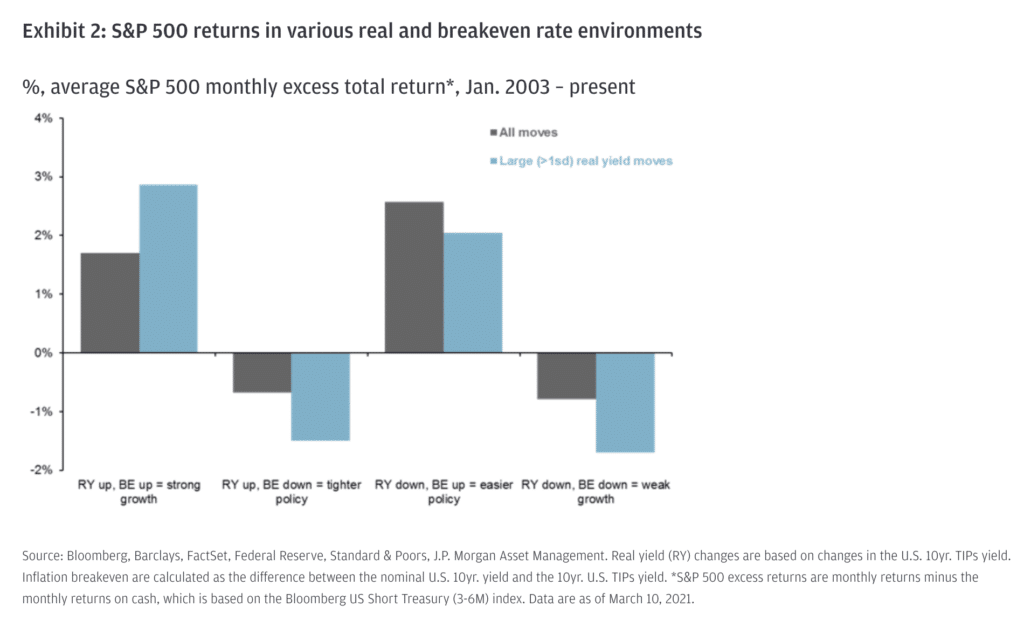 Josh here – real rates (nominal rates net of inflation), which we’ve talked about before, are going to determine how much more funny money gets thrown around. When capital starts carrying an actual cost again, the mental accounting people do will change. This shift will influence the communal decision making process amongst market participants. You will know.