One of the myriad ways you can spot a veteran investor amid a crowd of new or inexperienced investors – the veteran doesn’t need a reason to explain everything that’s happened. Veterans, after ten or twenty years, come to accept the randomness inherent in the game. Until you can accept that there isn’t always a reason for everything, it’s hard to move forward in this business.

Sometimes psychology just changes and sellers become in the mood to buy, or buyers get in the mood to sell. The media takes note of this shift in behavior and attitudes, and it sets out to find a reason for it afterwards. They do this because it satisfies the audience’s very human need for cause and effect. We all want linearly plotted story lines that have a beginning, a middle and an end. We want to know what force caused this or that reaction, because – our minds reason – if we see that force abate, then so too will we see the reaction subside.

Now, of course, this “analysis” completely disregards the fact that stocks and interest rates have a history of rising together. This happens all the time. Stocks have risen in 13 of the last 15 rising rate environments. Tech stocks too. High multiple tech stocks too. Here’s the last rising rate environment – the fall of 2015 through the fall of 2018, 10-year Treasury rate versus the XLK tech sector ETF: 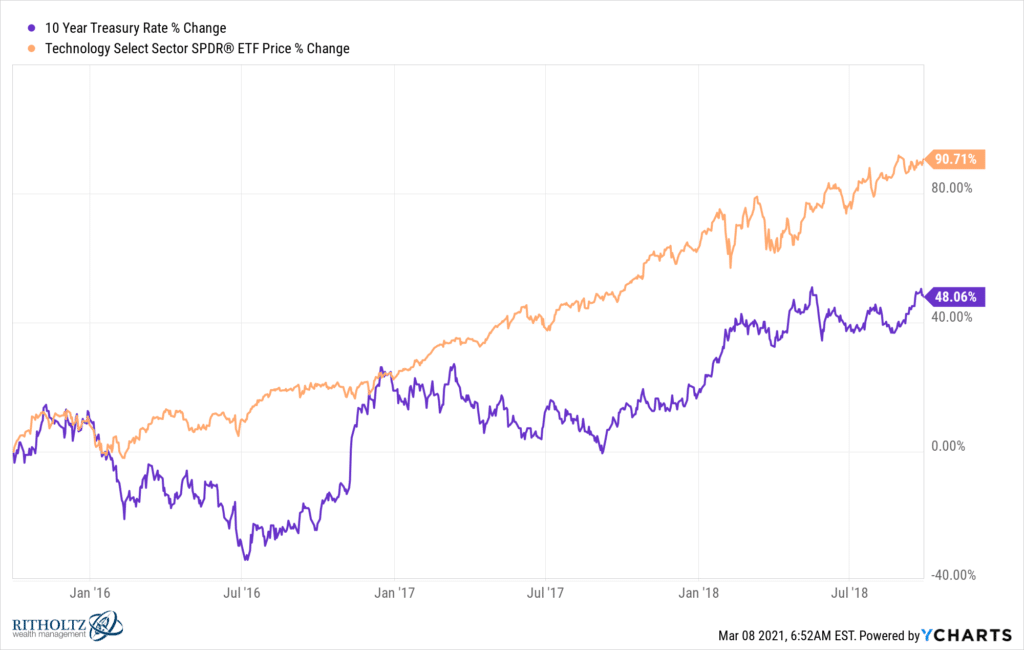 High multiple technology stocks doubled while the interest rate on the 10-year Treasury rose 50%. I’m sorry if this is inconvenient vis a vis the story about rising rates being bad for growth stocks that’s been so easy to repeat and repeat again.

Stocks go up until they don’t and only once in awhile is there a reason that can be spotted, in real time, to explain why. And vice versa.

In this case, the much better explanation for why the selling began comes from the supply / demand part of the story. Too many IPOs, too many SPACs.

There was nothing special about the day it became too much. But one day, after months and months of new issues hitting the market and becoming absorbed by the investor class, something changed. On that day, people just didn’t feel like taking down anymore. And so there were some disappointing capital raises. Some broken prices. Some stuff that went down when everyone had expected it all to go up. A little bit of selling begets more selling, which then continues to feed on itself.  This erodes some of the bullishness and the appetite for a very specific type of stock. You can use your imagination in terms of the ripple effects. People start behaving differently when the last three things they bought turn immediately red, especially after months of getting that automatic green when they log in.

I don’t know if it was on a Monday or a Thursday. In the morning or at the close. It doesn’t matter. There wasn’t a reason for it having happened, it just did.

All of the explanations for it are ad hoc, ex post and childlike in their simplicity.

The stock market is currently populated by somewhere between 10 and 20 million traders who have never operated in an environment in which they weren’t immediately rewarded with gains. For almost anything they did, in any stock, at any time.

That game is over. A new one has begun. It’s gotten harder. Veterans won’t be particularly fazed by this. Retail rookies will be disoriented. Some will adjust quickly. Most will need more time. The action you’ll see on your screen now will represent the tangible effects of this learning process playing out.

What If Interest Rates Don’t Matter as Much as We Think? (A Wealth Of Common Sense)