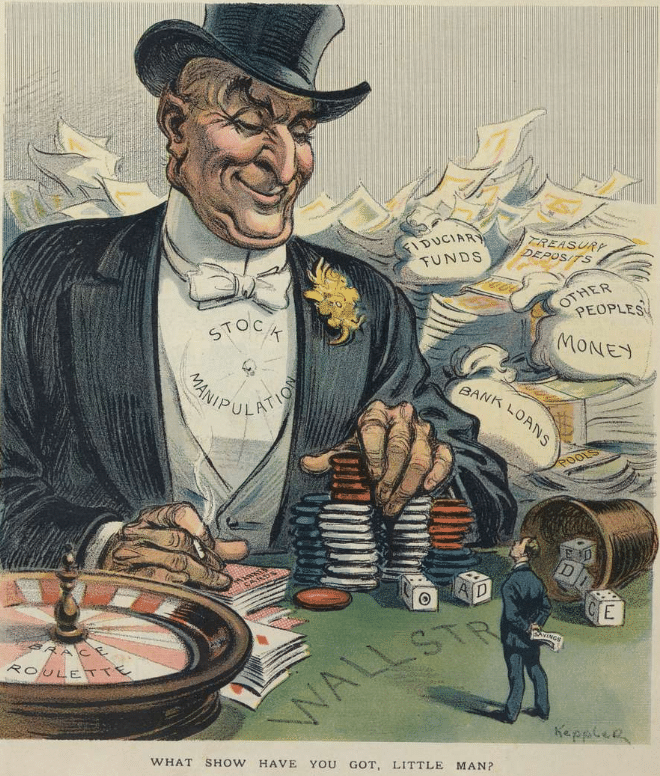 I’m on record having said I am thrilled to see small investors having made some big money on GameStop and AMC and the rest of the heavily-shorted stocks they’ve ridden to glory this year. It’s about time some of the spoils of the stock market rally have been better distributed.

But that doesn’t mean this will necessarily end well. And it certainly doesn’t mean that all (or even most) large Wall Street firms are mad about what’s going on. In fact, some of them are downright elated.

Let’s start with high frequency traders (like Virtu Financial) and market makers (like Citadel) – they love this. Millions of random people coming in to trade stocks for the first time, without regard to spreads, prices, time of day, order routing, etc. It’s Sesame Street meets Wall Street. This is where these firms make all their money.

Virtu Financial is publicly traded and the company feasts on two things – volatility and the easily harvestable trading mistakes of other players. They’re getting a major influx of both things at once right now and you can see the company’s stock price racing back up to its prior high, which occurred during the massive volatility of 2018. 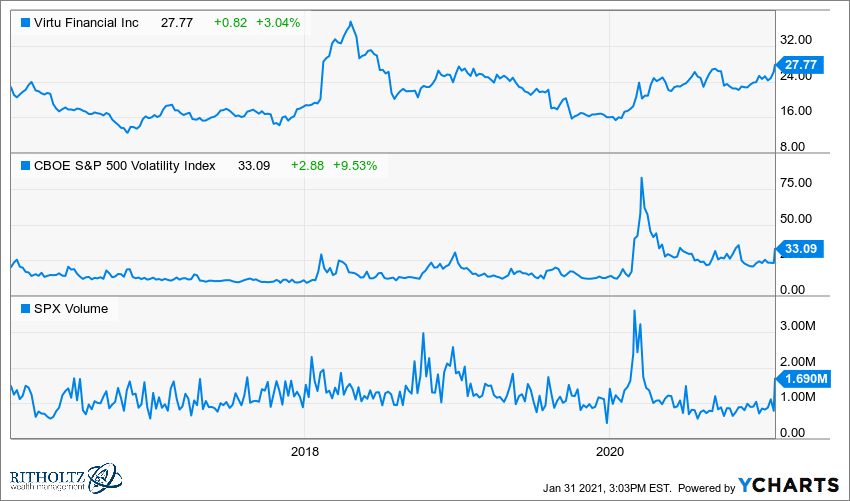 For HFT firms and market makers, volatility + volume = profits. Wall Street does not feel attacked by this, outside of the long-short hedge fund complex (which definitely does). If anything, Wall Street’s entrenched interests are very heavily rewarded by all this activity – because Wall Street does not pick sides. They get paid by both sides of the trade and make even more money when there is a scramble to lay off risk. “Wall Street” is not one of the roosters in this cockfight, Wall Street is the f***ing ring.

And then off Wall Street there’s this whole other complex of large players who are also feasting on this recent barrage of retail trading acrobatics. They’re not appearing on television or tweeting, they’re ringing the register. “Sold to you, Reddit and TikTok, and by all means please keep buying.” You will not hear anyone say this out loud. They don’t need even need to say it among themselves. There’s a lot of smiling and winking going on; there will be no electronic traces of a knowing smirk when the inevitable crash happens and the regulators shout CUI BONO? for the television cameras.

Petition writes about the supposed stock market “revolution” brought about on internet message boards these past few weeks. It turns out that a few unimportant hedge funds were blown up, but most of the real beneficiaries of the madness are not kids. They’re gigantic private equity firms, bondholders and landlords.

For example, the massive technology and media-oriented PE firm Silver Lake Partners just saw their AMC debt holdings swing from a loss of $200 million to a gain of $100 million on paper, as a result of the stock’s rapid rise. The company was able to raise hundreds of millions of dollars by selling stock and then re-engineer their various loans and liabilities thanks to the enthusiasm of the amateur equity buyers.

Except none of this ⬆️ seems to be taking into account that while, sure, shorts like Melvin Capital and Citron Research got smoked by a bunch of RedBull-IV’d basement traders,** plenty of other Wall Street-y institutions are having what seems like heaps of fun getting in on the F*cking. We mean, we’re looking at Silver Lake Partners — a private equity firm WITH $72B UNDER MANAGEMENT — and, call us crazy, but they’re, like, a private equity firm. They seem to be right up there with those targeted by WSB. We’re sure they were thinking about the “little guy”   when they converted their debt into equity and systematically dumped their equity holdings (as the price ascended, of course) into the market while also ridding themselves of their $100mm 10.5% first lien notes, completely severing ties to AMC while the market drooled all over itself…

Note the average price per share! Reuters tallies the sale proceeds at $713mm. We would check that math and/or calculate the IRR but, frankly, we are afraid our tech will spontaneously combust and/or Johnny may throw himself out the window in a fit of disbelief, frustration and jealousy (with maybe a pinch of admiration). Suffice it to say, they did alright.

Sold! To the man-child eating chicken tenders at 2 o’clock in the afternoon! Next auction!

AMC’s bond prices popped in value along with the share price as the company brought in new liquidity. Guess who actually benefits, like, with real dollar amounts on the line:

The entire cap stack popped this week. It ain’t just the landlords: creditors all across the capital structure are rejoicing. Hip hip hooray for Reddit!

Annnnd who are the top holders of AMC stock? Well, aside from Mudrick, there’s BlackRock, Vanguard, Susquehanna, D.E. Shaw and others (sure sure we get that it’s mostly in street name but still). And let’s not forget Goldman Sachs (and B. Riley)! The “vampire squid” are agenting the ATMs for AMC so they’re definitely getting paid. Similarly, Ernst & Young LLP is the company’s accounting firm and KPMG LLP is the company’s auditor. Moreover, there’s Wall Street-y law firm, Weil Gotshal & Manges LLP, which helped paper the company’s various financings and provided an “Opinion” in support of the ATM. All for the the very progressive rate of $1000+ an hour.

So spare us the “little guys” narrative.

Now, it’s true that there are many small stock holders who’ve just reaped a windfall. But it’s also true that they are now in a crowd-funded ponzi scheme that literally requires more new money from new investors to come in behind them to absorb all of the dumping that’s still to come by the pros. If you think the pros are against what’s happening now, then you haven’t actually learned anything from this past week.

They love it. And while you’re in a buying mood, what else can they sell you?

And lest you think the fact that large moneyed interests winning is a reason for you not to play, please read what I had to say about the stock market being rigged way back in 2014.

Now please go read Jamie Catherwood for a centuries-old history lesson about how the Pros vs Joes battles on Wall Street have historically resolved (and yes, this has all happened before):

Speculation and the underdog (Investor Amnesia)

“The Stock Market is Rigged!” (TRB)