Here’s an ETF of European bank stocks versus their US counterparts in the negative interest rate era. Both suck. But one sucks so much more. That’s because in the United States, we never went full ___ and did the negative rates thing. In Europe, they can’t stop themselves from doing it. 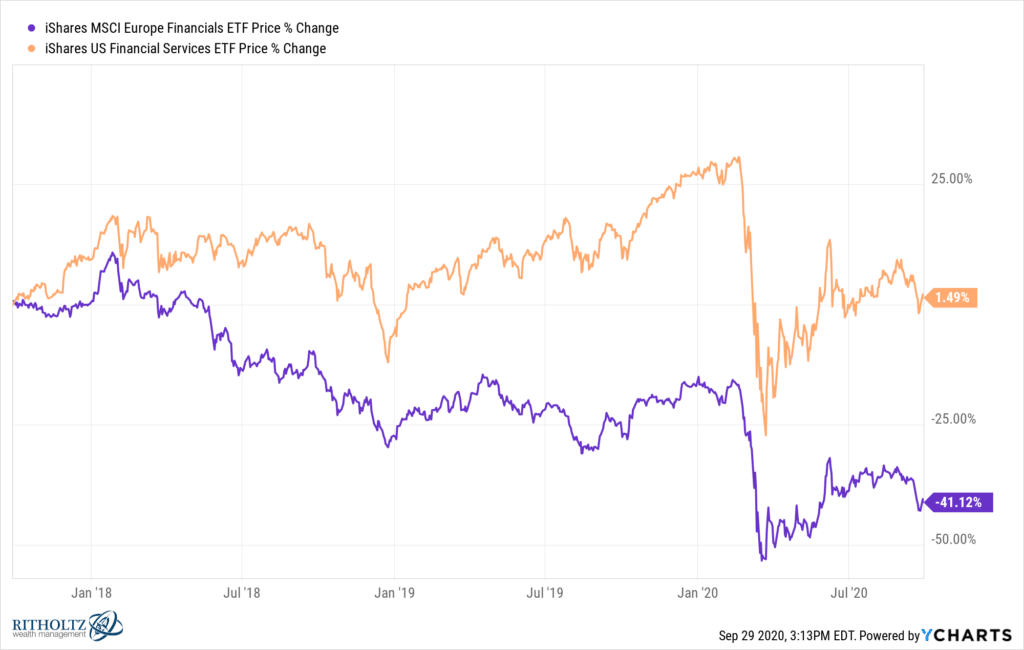 It’s bizarre, because it obviously is not bringing about the intended boost in lending and economic activity. And it’s horrendous for psychology. And it shrinks bank profits. But other than that, it’s great.

In this Economic Letter, we revisit the question of bank performance under extended negative policy rate episodes in foreign countries and assess recent evidence on bank activity. Our results indicate that both bank profitability and bank activity deteriorate over the course of negative rate episodes. In particular, while negative rates raise bank net income in the first year, they begin to drag on profits over time. We find this effect is statistically significant for the banks in our sample that have been under negative rates for the longest time. We also find that bank lending—which is often the motivation for negative policy rates—increases only during the first year under negative rates. Lending declines over the next two years, more than reversing any initial gains.

Just going through this paper from the San Francisco Fed that takes a look at what happens to banks when a negative interest rate policy is implemented. We’ve got a big universe to observe – 27 countries in Europe plus Japan.

Turns out, negative interest rates spur a little bit of extra lending and then that goes into reverse by the second year. You end up losing more than you gained in terms of economic activity. Banks benefit somewhat from the fact that the securities they hold rise in value, but their net interest margins are squeezing shut at the same time, which ends up being a wash.

One chart and then I’ll send you over to see the whole thing for yourself…and to wonder when the Europeans will cut the s*** already and try a different approach.

Figure 2 illustrates the estimated differences in total bank loan growth as a function of the duration of the negative interest rate policy. Our results confirm that bank lending expands 4.3% during the first year under negative interest rates. However, this growth more than reverses over the following two years, by 4.9% and 5.2% respectively. From year four on, our estimates are statistically insignificant but uniformly negative, with lending growth declining 2.5% on average. 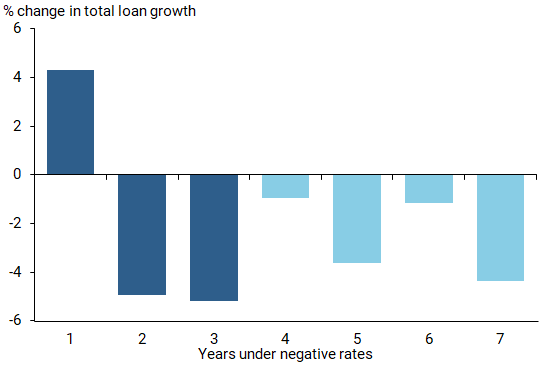 Okay, go read it and pray that the President never gets his way on negative rates. Like tariffs, negative interest rates are the opposite of stimulus. They are an economic depressant and solve nothing.