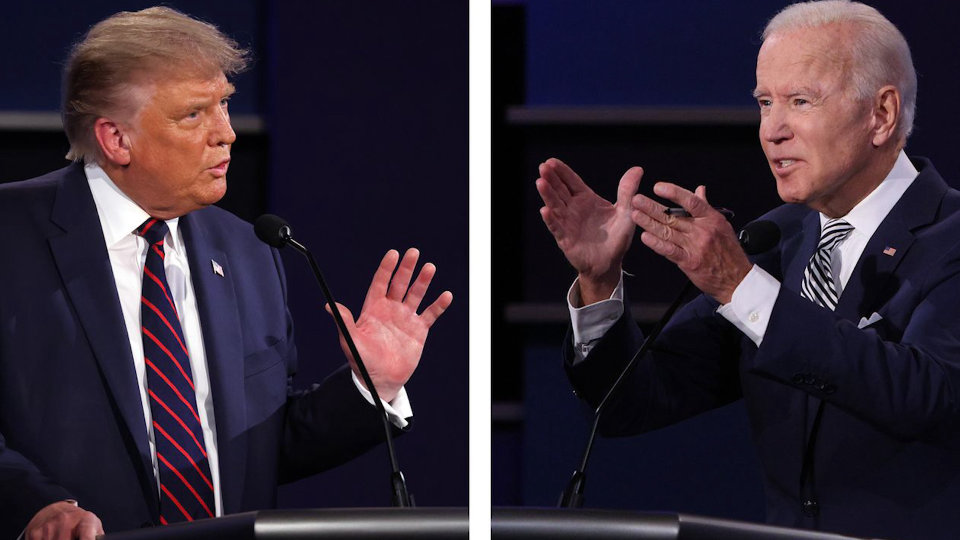 Last night’s presidential debate was the worst one I’ve ever seen. And I’m old enough to have seen Admiral Stockdale. Dan Quayle. Sarah Palin. Ross Perot. I have seen some s*** in my time.

The good news is that 90% of voters have already made up their minds about who they’re going to vote for, so last night was probably not terribly meaningful anyway. And if you’re undecided at this point – meaning you don’t know which tribe you belong to yet – I’ll just assume it’s because you’re in some sort of a Kill Bill situation, where you went into a coma on your wedding day years ago and have yet to awaken to begin plotting your revenge on the assassin’s guild that conspired against you. Stay asleep, Kiddo, you’re not missing anything good.

I don’t know who’s been preparing Joe Biden for debates and public appearances, but he seems to be conspicuously short of great one-liners and zippy comebacks. These are the only things you need to be armed with in the modern era, as Twitter, Snap and Instagram have shortened our attention spans. You need to walk off the stage having had one or two “moments” – moments which can be embedded, retweeted, GIF’d, looped, meme’d and Peloton’d. Biden didn’t have any of these. They’re not hard to be prepared with. Oh well.

There were six topics brought up by Chris Wallace, who had essentially lost control over the proceedings within the opening five minutes. If I were writing stuff for Biden, here’s what I would have given him. And then there would have been a 50/50 shot that he’d be able to deliver it, but 50/50 is good enough:

Coronavirus: “No country in the world has handled COVID-19 at a national level worse than the United States. Even the s***hole countries you laugh at are now laughing at you.”

The economy: “Every single grievance that got you elected in the first place is now worse than where it was in 2016. By every conceivable measure, wealth inequality has exploded. I guess I didn’t realize how many of your voter base are secretly billionaires, CEOs, real estate moguls and stock market tycoons. Your disastrous tariffs required a bailout of farmers twice as large as what we did to save the auto industry 12 years ago. The manufacturing and energy industries, which you claimed to be the savior of, haven’t been this horrible since the 1970’s. Congratulations.”

Supreme Court: “Your party has set the new norm for what we do with a Supreme Court vacancy in an election year. We intend to honor your wishes and wait until after November to address it.”

Race and violence in American cities: “One of us is seeking to heal the racial divide and settle these longstanding issues before anyone else gets hurt or killed. The other one is willfully pouring gasoline on the fire, and building a campaign atop the ashes.”

The integrity of the election: “There are very few world leaders who begin calling into question the integrity of their country’s elections before they’ve even begun, but every single one of them has the same thing in common – they’re all despots and dictators.”

Now, compare these lines to the ones half-heartedly delivered by Biden as Trump talked over him, without consequence, for 90 uninterrupted minutes. Had he walked off the stage having delivered anything like this, the internet would have amplified it for free. Trump gets his stuff amplified for free all the time. He’s the master. Whether you like it or not, the rules of the game have changed to suit him, and you have to play by them until you can write your own.

Trump may not have made any new fans last night with his conduct, and the majority of the media will not give him an ounce of credit for what he did. But the way I see it, he was effective at convincing his base to come back out for him. His on stage performance was an explicit promise of four more years of the same, if that’s what you’re into.