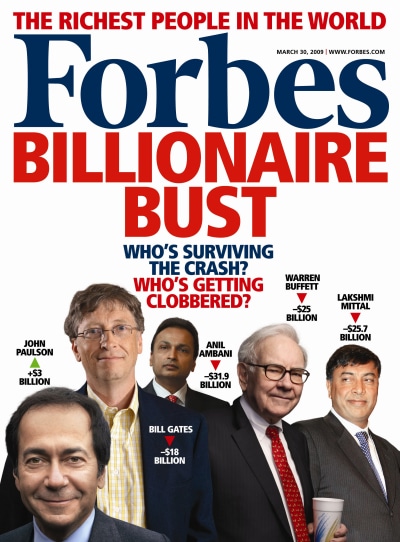 I came across this magnificent time capsule of a magazine cover the other day and I just had to do a Where Are They Now? post about it. It came out at the very bottom of the Great Financial Crisis in March 2009. Warren Buffett and Bill Gates were seen as two of the big losers because of the drawdowns they experienced in the share prices of Berkshire Hathaway and Microsoft respectively. The two Indian gentlemen, Lakshmi Mittal and Amil Ambani were also “clobbered” on paper, facing losses of $25.7 billion and 31.9 billion as the global economy fell off a cliff.

The big winner at that time was a once-obscure hedge fund manager, John Paulson, who had managed to put on one of the greatest trades of all time – a massive, leveraged short sale of real estate, housing and mortgages that paid off exponentially as complex securities in the credit market blew up.

In the ensuing decade, Mr. Paulson found it impossible to repeat that success, with year after year of disappointing returns and huge losses for the investors who threw their money at his funds in the aftermath. This July he called it quits and has announced plans to wind down the funds to spend more time with his money. He’ll be fine.

Mittal, the steel magnate, is still one of the wealthiest people in the world, at number 189 on the Forbes list, worth about $10 billion. Ambani, who works in oil, gas and petrochemicals, is the fifth richest human being on earth with a fortune valued at $88 billion.

As for Mr. Buffett and Mr. Gates, they have never been wealthier. The massive paper losses their portfolios experienced a decade ago did not prompt them to panic or take evasive actions. In fact, they did the opposite – using the catastrophic volatility of the markets to position themselves to reap even more riches during the inevitable recovery. It’s all going to charity anyway according to their Giving Pledges, but more is still better for these purposes.

Bill Gates is now the third wealthiest person on earth, worth $115 billion while Warren Buffett sits at the number six spot, with an $82.3 billion fortune. They knew then that the assets they held, despite their prevailing prices, would someday be valued higher when the panic stopped. That unwavering faith, that obstinance amid a storm of selling, made all the difference. It’s simple but it’s not easy.

It’s unlikely that you’ll ever find yourself with portfolio losses of $18 billion or $25 billion. But whatever losses you’re facing in your own life will feel just as bad, proportionately.

It’s not enough to be smart. Everyone’s smart. Investing is about endurance and the ability to withstand large drawdowns from time to time without panicking. Buffett says “The most important quality for an investor is temperament, not intellect.”