The Barron’s cover story by Ben Levisohn this weekend is “Yes, It’s a Stock Market Bubble. That Doesn’t Mean Trouble for Investors Just Yet.” Ben does a good job of capturing the storytelling that’s led to one of the greatest stock booms we’ve ever seen:

The story began easily enough, if not with “once upon a time.” A virus forced the country to shut down and accelerated the gains in a select few technology stocks that are uniquely capable of thriving with everyone stuck at home. A central bank took quick action to prevent financial markets from seizing up, pushing interest rates about as low as they could go. That helped lift the stocks of companies that are growing, including chiefly the aforementioned tech stocks, even if some have no profits. These stocks were among the first to rally once the stock market bottomed in March.

It’s a good article, but I hate this chart so much. Because while it’s technically accurate, it’s absent the most important information to give readers the correct context… 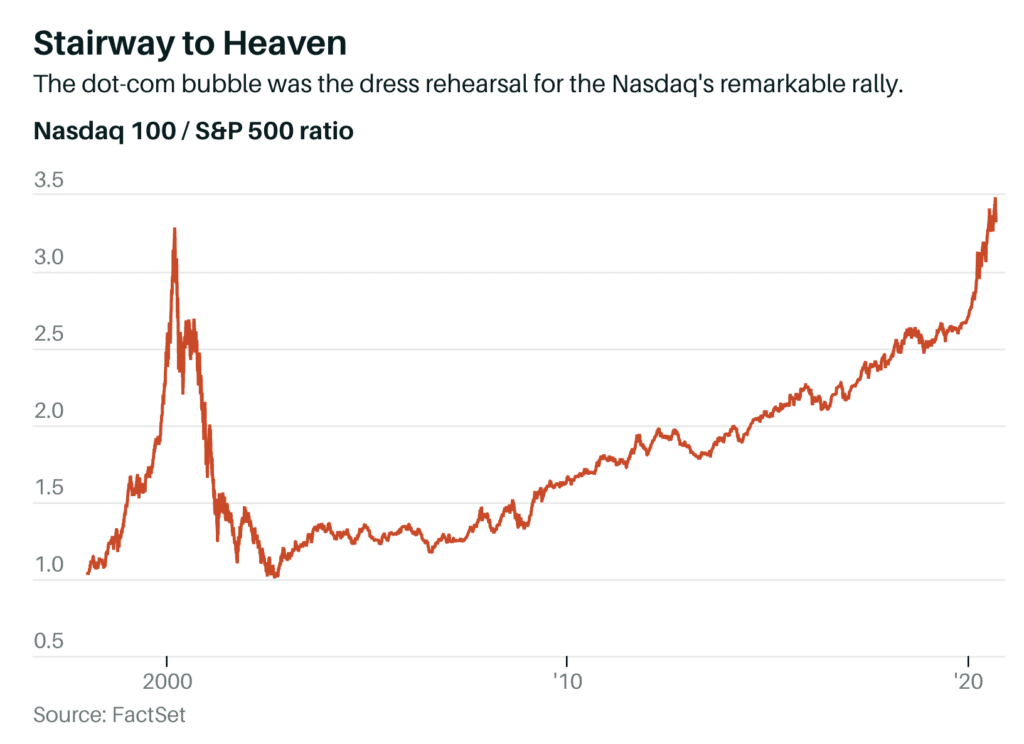 So, I’m just going to add my own chart below to complete the story. Here’s revenue growth over the same time frame, in dollars, for the top ten holdings in the Nasdaq 100: 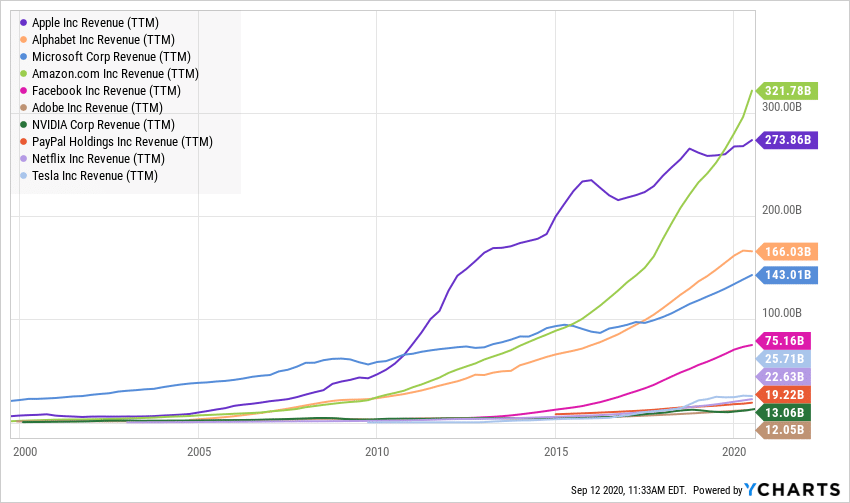 So, you can call it a stock bubble, but then you’ll also have to acknowledge the fact that it’s a business bubble too…? And there’s no such thing as a business bubble. People are either buying and consuming products / services or they aren’t. And they clearly are. With all due respect, show the fundamentals too. That’s the whole story.

Maybe instead of calling the 2000 dot com bubble a “dress rehearsal”, why don’t we simply say that investors in the year 2000 were precisely right about the impact that the internet would have on the world, but they were ten to fifteen years too early, betting on some of the wrong companies and business models in the early days and paying valuations that were unjustified at the time.

With the exceptions of Sun Microsystems, Oracle, Intel, Microsoft and Cisco, there really wasn’t any revenue (or revenue growth) to back up the skyrocketing Nasdaq 100 at the turn of the millennium.

Now, it’s just the opposite – there has been nothing but revenue growth in the names comprising this index – and so much of it seems to be secular (non-cyclical) that you almost get the sense that it’s all been immune to any semblance of a traditional business cycle. That immunity probably can’t last forever, as these companies gradually begin hitting their heads on the Law of Large Numbers ceiling, but where is that ceiling exactly as the global economy digitizes? Two years away or twenty?

So yes, the Nasdaq 100 has now done significantly better than the S&P 500 over the last few years. But this time, it absolutely should have.