Warren Buffett is an investor who looks to buy future growth at reasonable valuations today. He prioritizes long-term cashflow generation, management quality, competitive position and return on capital when he buys a stock. He’s got two well-known investment lieutenants helping him make decisions, and they are also empowered with enough autonomy to make decisions of their own.

One thing you will not find throughout the annals of Berkshire Hathaway’s history is a lot of “thematic” investing. Buffett doesn’t do “themes.” He would not have been a big user of Motif Investments. He doesn’t use his stock purchases to tell a story about his macro forecasts. He may discuss his stock purchases in a broader sense (Buy American, I Am) to convey an opinion about the present market situation and where he’s finding value, but he doesn’t make an investment in order to express himself or signal something.

He makes investments in order to earn a profit. Not in order to tell you a story and put you to bed.

A couple of weeks ago, Berkshire Hathaway “unveiled” – LOL, filed –  a $600 million stake in a gold mining giant called Barrick Gold (ticker GOLD – full disclosure, I am also long). Buffett’s been dismissive of gold over the decades as anything more than a commodity trade and he has never entertained the dogma of gold as a superior store of value vs ownership in businesses, gold as the one true global currency, etc. And if you think Buffett’s been unnecessarily caustic about gold bugs, then you definitely don’t want to hear what Charlie Munger has to say on the topic.

Well, when Berkshire’s latest 13F came out and Barrick was among the company’s new holdings, people lost their minds. The goldbug community yanked on the thread so hard they were able to knit themselves into a brand new Christmas straitjacket. Then the crypto people jumped into the fray (when do they not?) and all of a sudden, up was down, black was white, and Warren Buffett had been transformed into some sort of prophet of economic doom. This is the internet in all its glory. With every passing day I become more easily persuaded that the whole thing was a huge mistake. We should have taken those America Online CD-Rom discs and shot them into the f***ing sun.

Forbes senior contributor Rob Berger collected some of the headlines: 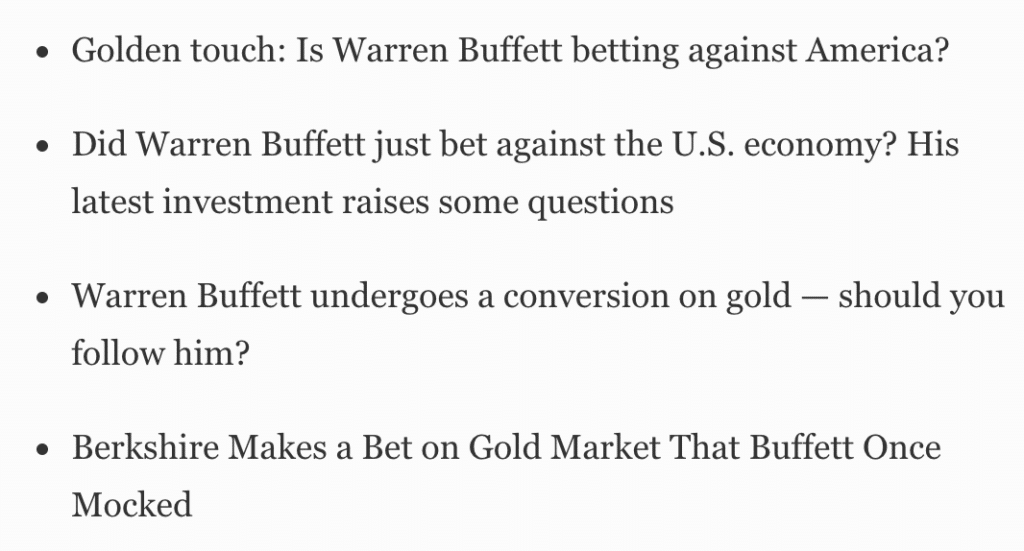 All bulls***, but that’s how the financial content game online is played. Don’t get mad.

Now, it’s entirely possible that Berkshire could potentially begin investing directly in gold or silver futures, and do so as part of a “bet against the US economy”…but that’s not what this is. Barrick Gold is considered to be the best managed gold mining giant on the public markets. Buffett has invested in gold and silver mining enterprises before. In 1997, Berkshire Hathaway bought over 100 million ounces of silver from commodity brokers in London. They took physical delivery. At the time, silver’s price was trading below the replacement cost to mine more silver. Berkshire explicitly laid out this rationale – “a market imbalance” that they expected to resolve itself with higher prices – in a shareholder letter. Thirty years earlier, Berkshire had made other investments in metals and mining. So, this summer’s revelation of the Barrick stake is not “an about-face” or “a conversion” or any other such nonsense.

Remember, Berkshire invests to make a profit, not to make a statement.

It’s worth pointing out that as the price of gold has gone up, and the price of energy has gone down, the earnings expectations for all the large mining stocks have risen. This is a great time in the cycle for these stocks – demand for the product is up and the costs of mining and shipping it are low. Berkshire undoubtedly has followed the career of Barrick CEO Mark Bristow, who has been shedding bad assets, bringing down debt and also betting on copper being an important commodity for the environmental revolution now happening around the world. You can read about Bristow, who’s been described as “swashbuckling”, here at the FT.

$600 million is a lot of money. For just about everyone on earth. But it’s really not in the case of Berkshire Hathaway. As Berger points out, Berkshire maintains approximately $40 billion worth of bank stocks, including a Bank of America stake that was added to substantially at the same time as the purchase of Barrick shares. Berkshire also has significant interests in Visa and Mastercard, as well as a $15 billion stake in American Express. We’re talking about an insurance conglomerate with a $500 billion valuation, $250 billion in stock market investments, and another hundred billion and change in cash – at all times – to find a home for. Berkshire’s ownership of the Burlington railroad as well as a vast array of electric utility, natural gas transmission and other like assets represent a permanent bet on America. This is a bet that could potentially be hedged, but it can never be folded. To suggest otherwise because Berkshire threw some “pocket change” into a mining company with good prospects and cashflow generation – well, you’re either stupid or deliberately misleading your audience. Pick one, I don’t care.

As Warren Buffett himself once quipped, “Let blockheads read what blockheads wrote.” Be careful about where you’re getting your news and opinions from. Some takes are just designed to be provocative and others are simply coming from misinformed or inherently biased sources.

Which brings me to today’s news – “Warren Buffett is betting big on Japan!!!!!”

No he isn’t. He took 5% stakes in the five largest “trading houses” on the Japanese stock market. He’s invested in international companies before – from an Israeli contractor to a Brazilian private equity firm to a Chinese electric battery concern and everything in between. These don’t represent country bets per se. And by the way, Barrick is based in Canada, so instead of it being a gold bet, I could have just as easily contorted it into a Canada bet. “Oracle of Omaha eyes Canada as next big investment winner!”

The trading houses of Japan are global in scope, carrying out commerce and investment activities all over the planet. From the Berkshire Hathaway statement itself:

Mr. Buffett expressed his pleasure with the investments: “I am delighted to have Berkshire Hathaway participate in the future of Japan and the five companies we have chosen for investment. The five major trading companies have many joint ventures throughout the world and are likely to have more of these partnerships. I hope that in the future there may be opportunities of mutual benefit.”

So, yes, he’s probably optimistic about “the future of Japan” or else he certainly would not have been investing in five companies that are deeply ingrained in the country’s capital markets and industrial finance machinery. Japan’s forced to import many of the commodities it needs to power and feed itself – and these are the companies that facilitate it. But, more than a country bet, these investments are representative of Berkshire getting back to its roots as a value investor. Four of the five companies he’s bought into were trading at a discount to their book value (as many blue chips in international developed markets currently do).

Warren Buffett didn’t just get long Japan, he expressed his value credentials at the same time. ITOCHU is trading at 9.5x expected earnings and has a dividend yield of 3.2%. Marubeni is trading at 8.8x earnings with a dividend yield of 2.4%. Mitsubishi has a 9.3X LTM P/E ratio and a 16x forward with a 5.3% yield. Mitsui is trading at 13x forward with a yield of 4.2%. Sumitomo is trading at 9x last 12 months and 9.3x 2022 expected earnings (they are expected to lose money in fiscal yr 2021). It has a dividend yield of 5.1%. This is true value investing and one of the benefits of Abenomics was the focus on shareholder value and corporate governance. I’m long Japan as well so I welcome the focus on Japan as an area of value and maybe there is still hope for us value investors. Notwithstanding decades of monetary easing, near zero rates, massive QE and the purchases of equity ETF’s, the Nikkei still remains 40% below its 1989 closing peak.

Buffett is known for finding value in all sorts of businesses that many investors have decided are too boring to pay attention too. What he’s not known for doing is investing based on global macro forecasts, swinging for the fences with thematic investing or “betting big” on countries outside the United States.

Not everything is a fable. There isn’t always a takeaway or a sign or a moral of the story for you to grab onto. Sometimes a value is just a value. Barrick Gold is doing well. Japanese trading company shares are cheap.