One of the recurring themes I visit (and revisit) on this blog are the myriad reasons for which stocks and the economy can go their own separate ways, sometimes with very little in common between their respective performance.

There are many reasons for this, including the weighting of an index’s component stocks, the vast amount of corporate profits that are earned overseas and thus not part of GDP calculation, the effects of multiple compression and expansion over time, liquidity conditions, tax regimes, and so much more.

But let’s return to the weighting of index components for a moment, so I can show you this illuminating chart from Tom Lee and Alex Paulsen of Parametric. They note that of the $6.3 trillion of growth for the S&P 500’s total market cap since 2015, 60% of it accrued to just six popular technology stocks: Apple, Amazon, Alphabet, Microsoft and Netflix. The other 494 components of the index had to share the remaining 40% of that growth, despite their making up 80% of its capitalization.

Taking this a step further, those six popular stocks are not hiring people at a rate that is commensurate with their size and scale relative to the rest of the market… 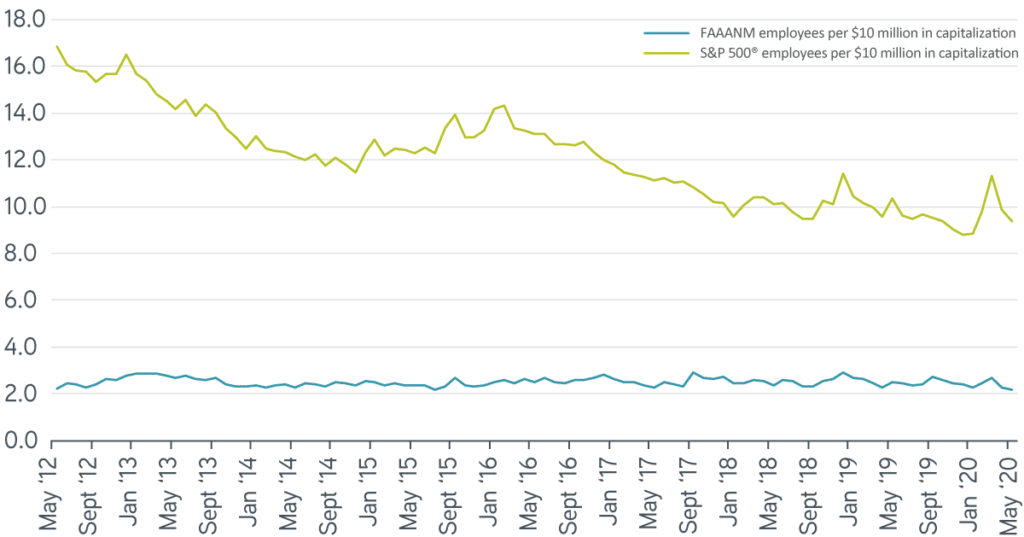 In testimony before Congress in 1953, Charles Wilson, the CEO of GM, confidently stated, “What was good for our country was good for General Motors, and vice versa.” At the time, GM had manufacturing facilities across the US that employed hundreds of thousands of people. Wilson couldn’t conceive of a scenario where GM and the country’s fortunes weren’t aligned. While the six FAAANM companies are important to the US economy, one couldn’t make that statement today with the same conviction for any of them. They simply don’t produce jobs like other large-cap market leaders have in the past. Moreover, as FAAANM companies continue to generate a material percentage of their earnings outside the US, their fortunes don’t depend entirely on the fortunes of the US economy.

Josh here – When you walk out your door in the morning, talk with your neighbors about how they’re getting and on and look for signs of activity at the coffee shop or the car dealership, it’s very unlikely that what you’ll see on any given day resembles at all the situation in the stock market.

It can be counterintuitive but it’s important to remind ourselves of this. Stock prices and real-life economic growth may trend in the same direction or they may stray from each other for long stretches of time. That doesn’t make one legitimate and one counterfeit. Especially once you’ve looked at which stocks are actually moving the chains.

One of the more perverse outcomes of the current health crisis is the way in which the pandemic acted as an accelerant for certain technology trends that were already established before its arrival. It’s not that we don’t want to have companies succeeding…but must it be so ostentatiously presented, against the backdrop of continued high unemployment, day after day?

Will we ever truly grow accustomed to it?

Wall Street Versus Main Street: The Disparity Between the Market and the Economy (Parametric Portfolio)