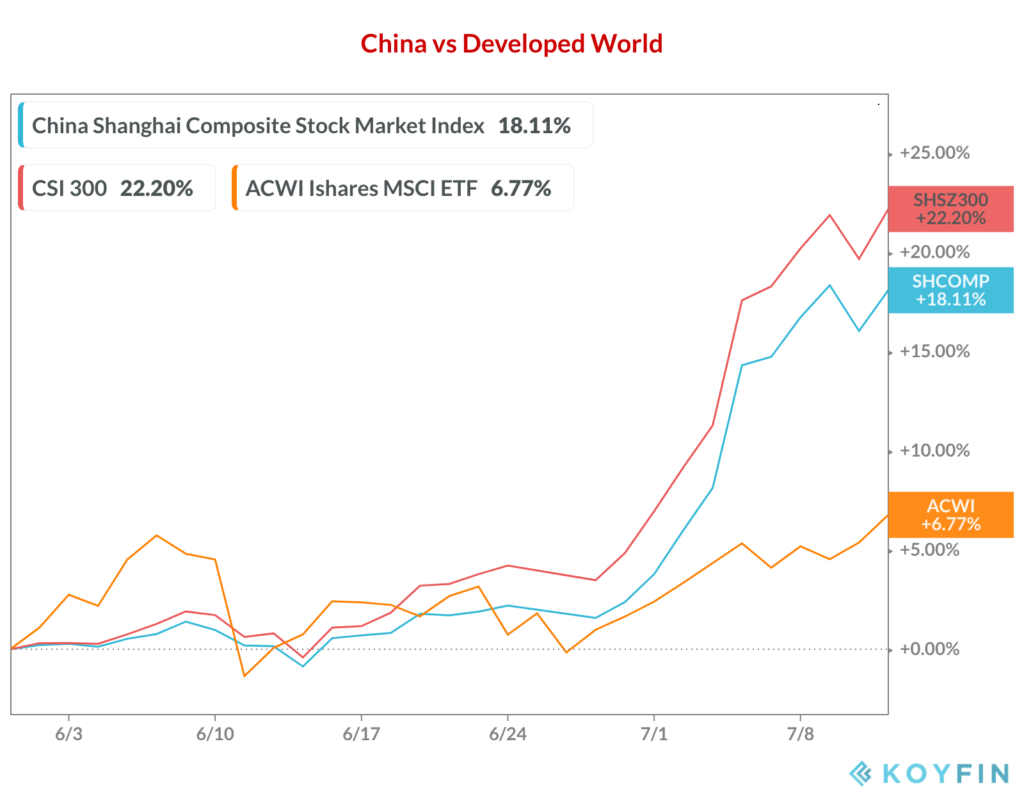 I’ve heard the explanation that the people living in Chinese cities had already been accustomed to wearing masks ever since the 2003 SARS outbreak, so it became second nature for them to fall in line. I’ve also read about the generally higher levels of obedience among the populace in countries like China and Singapore that were also contributing factors to their effective lockdowns.

Regardless of the underlying reasons, it appears that investors in Chinese stocks are benefiting. Which has helped to power the entire Emerging Markets asset class to six weeks of outperformance versus the US. Here’s JC’s ratio chart looking at EEM priced in SPY, with a momentum study (RSI) in the lower pane, indicating power behind the recent reversal rally… 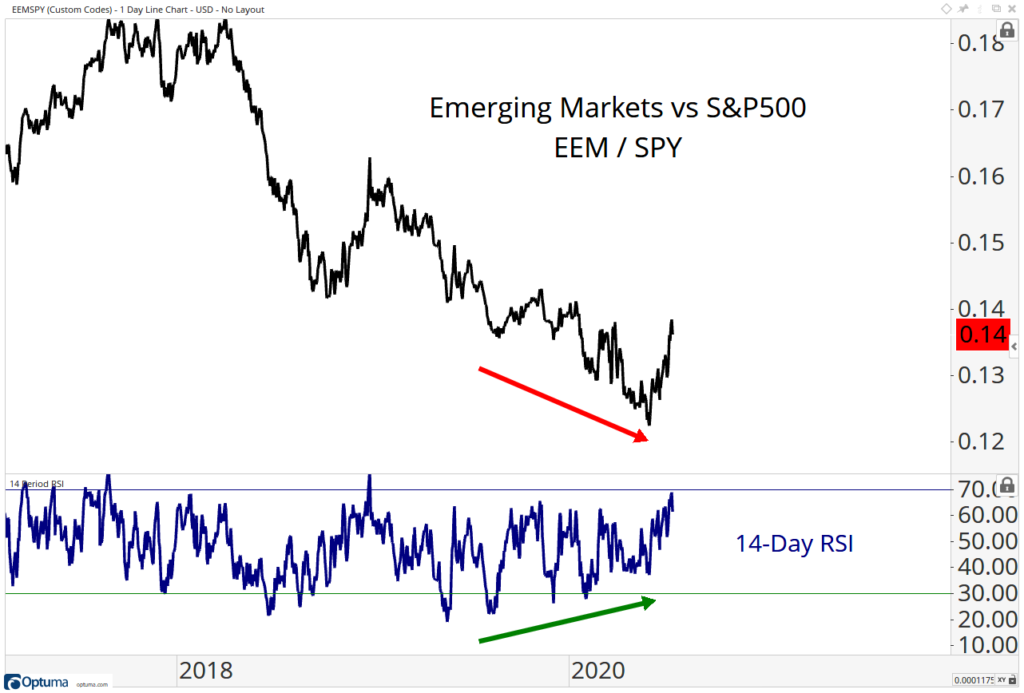 JPMorgan’s weekly multi-strategy report highlights the strength in Chinese stocks and the uptick in local investor enthusiasm. Here’s their chart of margin balances at the brokerages in China: 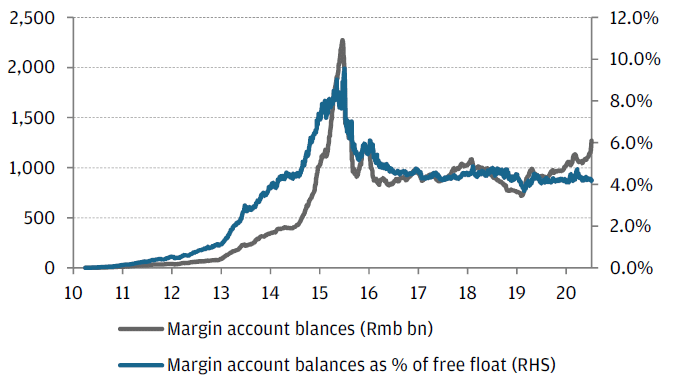 It’s important to remember the blue line is the one that most accurately reflects reality. Margin dollars will go up in absolute terms during any bull market because the dollar value of the denominator (the country’s overall market cap) will also be increasing. The gray line is the one that usually gets the bears’ attention but they’re quoting margin activity in the absence of a denominator, usually because they don’t know any better and they’re just repeating a growing number that sounds scary.

By the way, when you hear “A-shares”, they’re referring to Chinese companies trading on Chinese exchanges, which offer little access to foreigners but are widely held by mainland Chinese investors. When you hear about “H-shares”, these are Chinese companies with listed stocks on the exchange in Hong Kong, which can be traded and invested in by international shareholders. Many Chinese internet giants that maintain listings in New York or London, are now turning to Hong Kong, either additionally or instead of the western markets. Ant Financial, for example, is in talks to list their own stock in Hong Kong instead of at the NYSE, because of regulatory pressures, political pressures and other reasons. This is potentially a $200-billion IPO, bypassing both New York and London for its listing – unheard of until now.

JPMorgan cites trade-related tensions as the biggest risk to Chinese stocks. I’ll go out on a limb and say it’s safe for you to assume this risk will remain with investors for the next 30 or 40 years and will never go away. It’s a permanent risk. Brendan Ahearn at KraneShares makes the case that markets have gotten very good at minimizing these concerns:

Asian equities started the week off higher despite initial concerns over President Trump’s Friday announcement that a Phase Two deal isn’t likely. The US and China continue to shadow box with tit for tat responses though neither is going to draw blood by doing anything that would jeopardize a hoped-for US Q3 recovery.

It appears as though authorities in Beijing want to have a big stock market rally. If so, they’re well on their way. We can argue about how much or little power the Chinese government has to throw a bull market (or keep it going for long), but the charts are the charts. Chinese stocks have been heading higher and show no sign of being tired. On a relative basis, versus the US, they have a long way to go after almost 13 years of underperformance.

The Crash That Sparked Rotation Into Emerging Markets (All Star Charts)

Don’t forget to subscribe to my new and improved weekly podcast, The Compound Show, where I discuss big ideas like these and a lot more:

The Compound Show on Apple Podcasts