One of the things I’ve come to understand as we’ve built our business is that every time you choose a technology vendor, you’re doing a lot more than choosing a technology vendor. You’re making an investment. You’re buying in to that technology company’s future, its roadmap, its vision. You have no choice. Once you standardize on a platform, it becomes part of your business and affects your business. So where that platform thinks it needs to go is going to have an impact on where you end up going.

We’ve made some mistakes in selecting vendors for this or that feature, but two big decisions we got really right early in the game are Orion and Riskalyze. These are two companies that have helped us get to where we are.

In the case of Orion, they were already established as one of the best companies in the industry when we signed on with them to supply portfolio accounting and performance reporting software to us. This year we began utilizing their Eclipse trading tool as the complexity of working across three brokerage custodians (TD, Schwab and Fidelity) has necessitated a more streamlined approach. We’re still using iRebal for TD custody accounts – it’s still one of the best tools ever built for the industry – but bringing Orion’s Eclipse into the arsenal means that we’re going to get faster, more efficient and be able to handle simultaneous transactions across the board going forward. Orion has been an amazing partner for us, and we’re currently exploring their compliance tools as well. 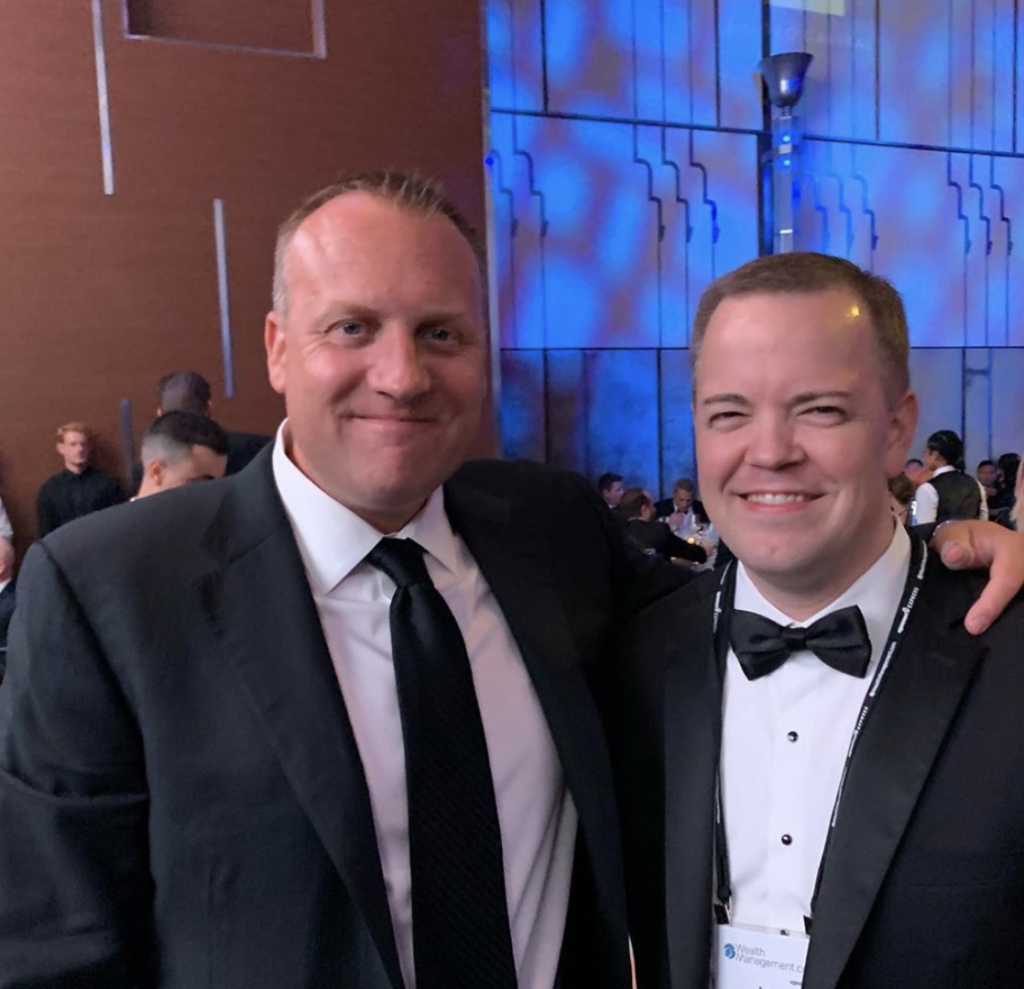 Aaron and I at last year’s Wealth Management Awards. I didn’t win anything, Aaron wins everything lol

In the case of Riskalyze, we were one of the firm’s earliest clients back in 2012. I met Aaron Klein while he was still in beta. Now he’s got enterprise deals at every major RIA firm, independent broker-dealer firm and platform in the industry. And despite his success in the large firm channel, Riskalyze is still supporting smaller, emerging RIAs as though they’re the most important clients in the world. It’s quite remarkable how the company has been able to grow so large while still paying attention to every customer up and down the scale. Riskalyze has been adding features and entering new verticals at a breakneck pace for almost a decade now. If you’re an advisor thinking about a new feature you’d like to incorporate into your practice, there’s a good chance Aaron’s people have already built it, or are in the process.

By choosing Orion and Riskalyze for critical parts of our technology stack, we’ve become investors in their success. It’s a partnership. We need them to succeed given how much we’ve built around the services and technologies they’ve created. I’m happy to report that for both companies, the outlook as never been brighter.

This week, Orion announced a merger with Pennsylvania-based Brinker Capital, a $25 billion turnkey asset management program (TAMP) firm that caters to over 5,000 financial advisors. Orion’s combining Brinker’s assets and strategies with its own TAMP to build a $40 billion powerhouse. We don’t use TAMPs at Ritholtz Wealth given our focus on proprietary strategies and select third-party managers, but seeing Orion get bigger and stronger is an affirmation that we’ll have a bright future together. I’ve learned a lot from watching founder and CEO Eric Clarke make all the right moves over the last seven years. He inspires me all the time. As for Brinker, I began doing business with them in my brokerage days back in 2001 when I needed an asset management solution for clients that went beyond what my firm was able to provide. They’re wonderful people who care deeply about the advisors who partner with them and the end-clients they serve. It’s going to be a highly successful union.

Also this week – as a member of the Riskalyze board of advisors and shareholder, I got the annual letter from Aaron Klein and it was packed with interesting stuff about what’s happened over the last year. Economic and market uncertainty from the pandemic has been a challenge industrywide, but also an undeniable reminder of how valuable his service has become for advisors and their clients:

While our own sales growth definitely slowed during this time, I’m proud to say that not a single business day has passed without at least one advisor joining Riskalyze — even Black Thursday, the worst day in market history since the Great Depression. On the flip side, we were stunned to see our cancellation rate drop like a rock during this crisis. We’ve never really had the opportunity to stress test our business with a market crash, and it would have been fair to assume that a crisis impacting customer revenue would be likely to impact ours as well. Instead, we’ve seen our cancellation rates running 15-20% below budget, putting us ahead of the curve on our goals to increase advisor retention. We’re grateful to be such an important part of the tech stack of the advisors we love to serve, and we’re excited to have built such a resilient business.

Whether you’re serving high net worth retirees or young people who are in the early stages of accumulation, the ability to quantify the risks they’re taking become indispensable in times like these. Being able to show clients how their portfolio risk matches up with their own personal risk tolerance is a critical weapon in the battle to keep them from making irreversible mistakes in the heat of the moment. Riskalyze’s other weapons, from trading technology to Retirement Roadmap to Autopilot will also have a big role to play as advisory firms gain increased comfort with moving analog processes over to the digital realm.

I’m proud of both companies and their employees for helping firms like ours navigate the current environment and continuing to help us improve our own client experience. Choosing Orion and Riskalyze to help power the firm are two of the best investments I’ve ever made.