I wrote this on my birthday, February 25th. I knew it would happen. Hundreds of S&P 500 component companies, like my Mastercard example, cut their full-year guidance for 2020 or eliminated it outright. The bears like that. But then, enough time goes by and everyone forgets what the original estimates were. And then the companies start “beating” the new numbers, which have been revised lower months ago. And these beats of the lowered estimates are cheered by buyers and bulls as though there was never an estimate cut in the first place.

Oh my god this pisses people off so much.

Maybe more than anything else.

It would make me mad too, because linear outcomes agree with the stories we form in our minds about how the future should play out. They don’t trouble us. He stepped in a puddle and his shoe got wet. He woke up an hour early and beat the traffic to work. She went to the gym five days a week and lost three dress sizes. This works for us. Keeps us in good humor.

The S&P 500 is now surging back to record highs despite the fact that Q2 GDP could be down 30 or 40%. It doesn’t make sense. How can we just focus on the reopen and pretend none of the bad stuff happened?

The bears forget, as the bulls sometimes forget, one very crucial thing about market participants – they don’t care about Good or Bad. Those two words are worthless on Wall Street, where the odds are never published and you’re always guessing at the expectations of the other bettors. So if there’s no Good or Bad, what is there? Well, the only two words that matter – Better or Worse. Don’t tell me employment is good or bad, tell me if its better or worse than expected. Don’t tell me if Nvidia had a good quarter, tell me if it was better or worse than expectations.

So now, we’re going to have a slew of companies come out and beat earnings expectations that had already been revised substantially lower. Their stock prices are soaring far above where they were when expectations were much higher. It’s completely incongruous. How could a company trade at 50 when we thought they’d earn $5 per share and now trade at 70 when they’re earning $3.25? Because the $3.25 is better than the $3 that was expected, and nobody is anchored to the original $5 anymore.

Now, instead of thinking about this at the individual stock level, how about across the entire stock market?

If I told you at the start of this that we would have forty million workers file for unemployment within a three-month span, and then said “Is that bad or good?” you probably would have said ‘that sounds pretty bad.” And then if I followed up with: “What percentage loss should the stock market have over a period like that?” You probably would not have said ‘Zero. Zero percent loss.’

And yet…here we are. 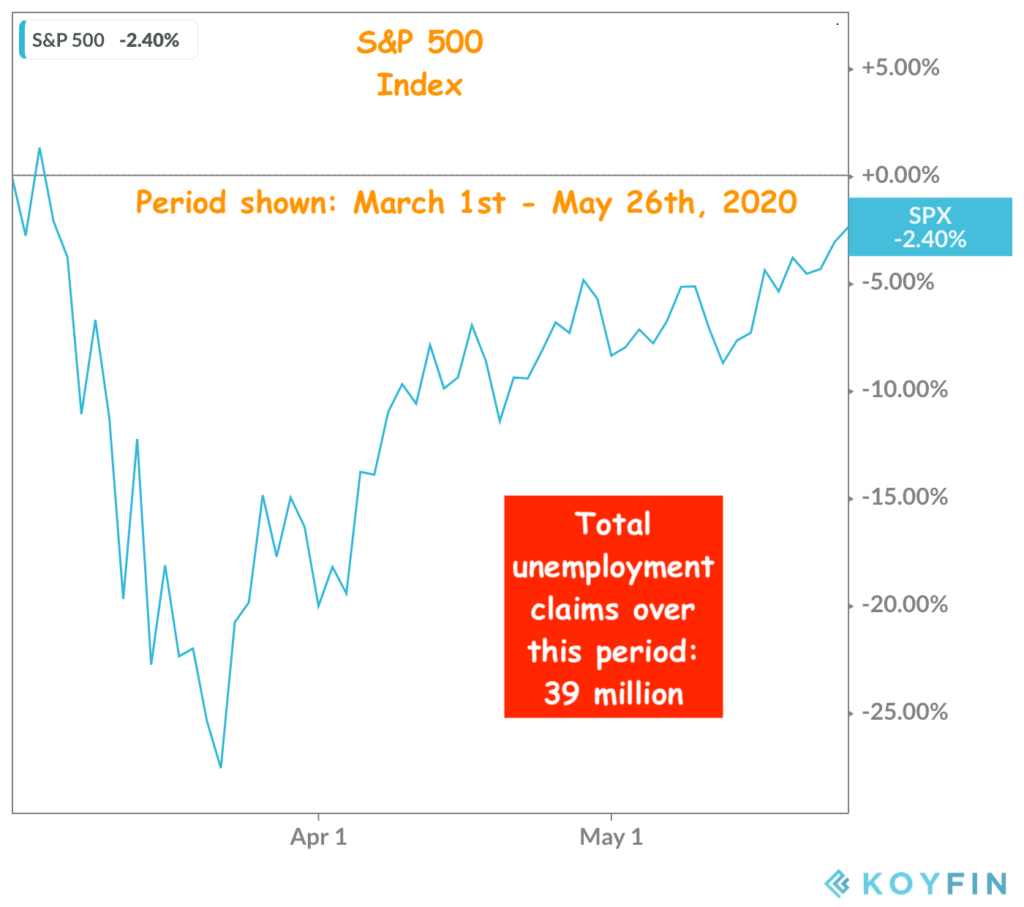 I used to think markets had to make sense over short time horizons. It took me a long time to accept the fact that nothing has to make sense just because I want it to (need it to). I forget this all the time, as I subconsciously construct these little cause-and-effect three-act plays in my mind for what should happen next and next and after that. And just when I think I have things sorted, the market so generously reteaches the lesson of Better or Worse to me once again.

Apparently, corporations have weathered the crisis better than they had been expected to.

Apparently, the reopening is happening sooner than had been expected.

Apparently, the consumer is spending more than had been expected in the early days and weeks of each reopened state.

This is not the same as saying the economy is good, or the reopening is good or the consumer is in good shape.

But Better is all the buyers ever asked for. Good can wait.