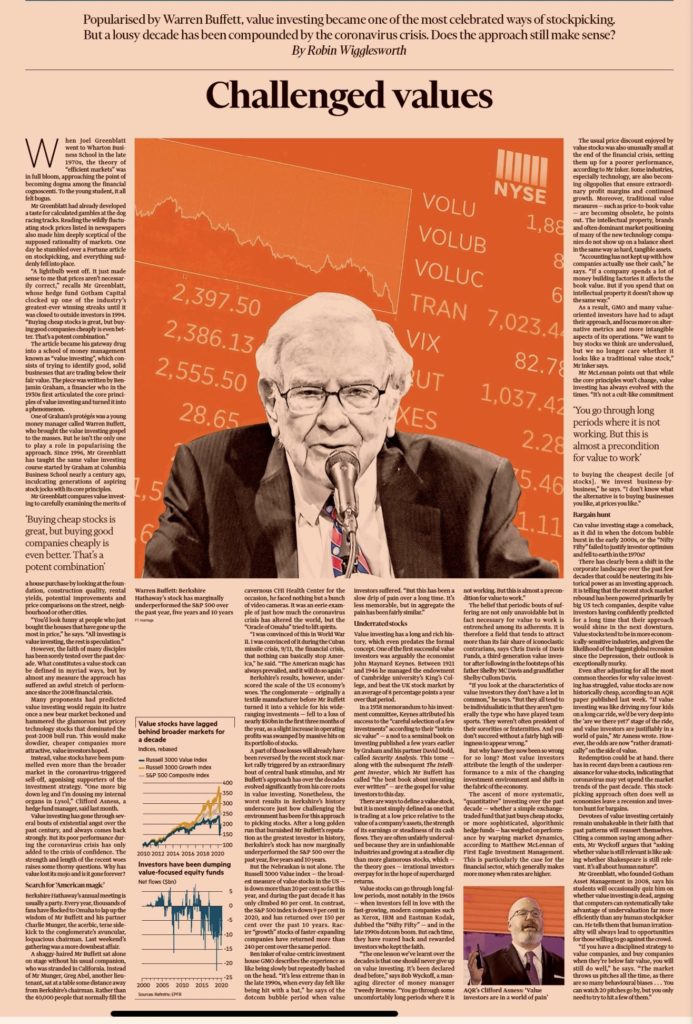 We’re having the “Value Investing is Dead” conversation again. It comes back for an eight-week run each year, like Game of Thrones used to. They bring back our old favorite characters – at least, the ones who haven’t been killed off by redemptions yet – and then introduce some new ones.

But the plot cycle is always the same – Nasdaq stocks, which reproduce copies of software at a price of zero dollars per unit, are outpacing some brick-shithouse industrial company that your grandfather worked for in the 1870’s. It’s so unsettling when the edifices of corporate might and respectability you remember from your young adulthood are not relevant to the next batch of young adults who buy and sell stocks for a living in your midst. What is wrong with these people!?! Amalgamated Asbestos and Two-By-Four Incorporated shouldn’t be single digit stocks! They’re part of the fabric of America! Heritage doesn’t confer a premium stock market multiple.

When people ask me what value investing is, I say it’s trying to buy a dollar for 75 cents. Which is an oversimplification but it makes perfect sense to regular people. So what is growth investing? It’s buying 75 cents for a dollar with the expectation that 75 cents becomes $7.50 in time.

I would argue that both approaches are “value investing.” The difference is that those in the latter camp are valuing the possibilities of the future more than the realities of the past. They’re taking the risk of those possibilities not paying off. Modern portfolio theory states that taking additional risk ought to lead to additional reward (up to a point). If this is so, then growth investors have earned their outperformance as a result of having been willing to bear this risk. It was low risk to invest in Hershey ten years ago because we know that chocolate never goes out of style – the only risk was profit margins and management execution. It was high risk to have invested in Netflix ten years ago, which has succeeded against all odds from those early days of being a standalone video streaming platform trying to both produce original content and build an audience at home and abroad.

It was not a fait accompli that Netflix would succeed. But it did. The investors who have been bearing the risk of Netflix not succeeding for the last decade have been rewarded well in excess of investors’ return in Hershey, a company that had the odds in its favor, historically: 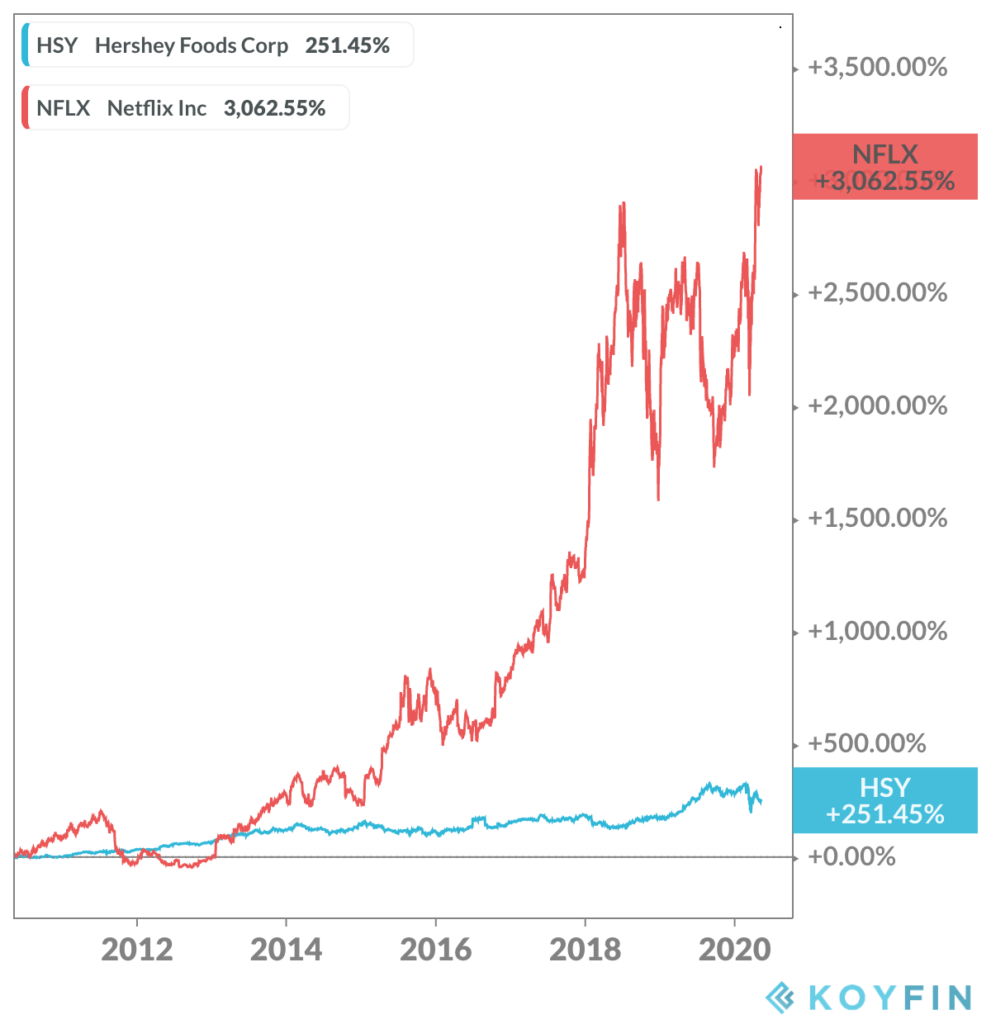 Now, a Netflix investor could turn around and say she is and has always been a “value” investor all along. It’s just that the thing she was valuing wasn’t the legacy of a company or its physical facilities or anything else that showed up in a tangible book value calculation. She simply chose to calculate the company’s value based on something else. Like recurring subscriber revenue, for example. Or the future returns of investments made in original programming today. Or the relationships the service had built with its satisfied users. To the Netflix investor, these were the metrics that signified value, not the GAAP accounting treatment of a sewage processing plant or the depreciation of accounts receivable for a company that sells rubber mats to the school playground industry.

I addressed a lot of this stuff already in a piece from last summer that went sort of viral, “When Everything That Counts Can’t Be Counted“. If you’re quantitatively inclined and don’t have an open mind, then everything I wrote in that post probably made you want to punch me in the face. My take is long on poetry and short on math. I understand how disgusting and inferior that approach to understanding the market is to some. But even the detractors have to admit that the things I said have turned out to have been even more true than they were nine months ago. The pandemic has sped up the prevailing trends that had discounted so many value stocks in the first place. Low price/book or price/earnings or enterprise value/free cash flow – pick your value favorite screen, it has not protected your downside or enhanced your upside during Coronatimes. At least not yet.

The best time to be invested in a traditional value stock is when the underlying company has figured out a way to stop shrinking and start growing again. That’s when you’ve got a bargain. The time between when that value stock is unrecognized for its growth prospects and when it becomes so highly recognized that it is now a growth stock – that’s where the money is made in value investing. It’s very hard to detect these opportunities, whether systematically or fundamentally. Most will not be able to. Value traps will be more prevalent than value companies that re-learn how to grow. There have been tens of thousands of publicly traded companies in the United States and there are only 3,000 or so now. Most businesses don’t live forever.

Value investing is immortal. It cannot die. Perhaps the way it’s been traditionally practiced is dead. The metrics that the value discipline has been based upon are not and have not been relevant for a long time. There could be a revival of interest for these metrics – the investment world may wake up one day and decide it cares about them again. But there are no guarantees. As Marty Zweig so eloquently stated in 1990, “Every indicator eventually bites the dust.” The famed technician was talking about stock price indicators, but why couldn’t the same be said of stock value indicators?

It’s quite possible that the moment I pressed “publish” on this blog post, was the moment that the next Value Stock Renaissance began, quietly, in some long forgotten corner of the stock market involving cast-iron ball bearings or old-timey tin canisters for mustache wax. And if that’s the case – if this is the top of the growth stock summer and the bottom of the value stock winter – I will gladly and humbly print this post out and tape it to my forehead. I guess the only way we’ll know for sure is when enough time has passed.

And now, I’d like you to read the following excellent links about this topic: