Here’s WTI Crude Oil versus the USO ETF that’s meant to track it over the long, long term. Directionally it’s okay sometimes and then sometimes it isn’t. It’s a fifteen year old attempt at something that probably should have been retired a long time ago.

In the lower pane, you can see the range in correlation, which is all over the map: 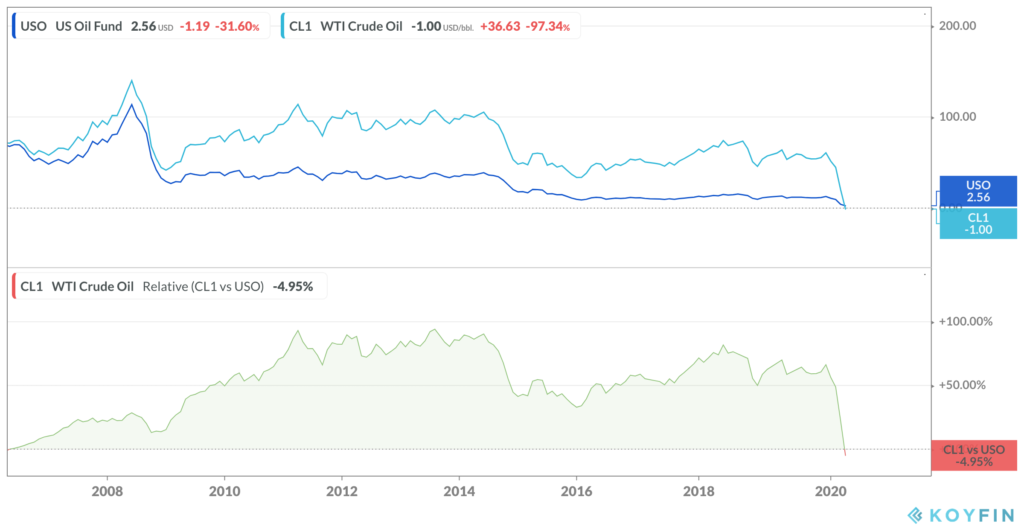 I think GLD is the only commodity tracking exchange traded fund I can think of that provides a suitable direct exposure, but this is because its shares represent physical quantities of the metal, in storage, available for audit / inspection and not reliant on rolling over futures contracts. Okay, maybe throw in SLV, I’m not sure.

The guys at Grayscale are doing Bitcoin via “physical” by buying actual Bitcoin as money comes into their trust, as opposed to rolling Bitcoin futures contracts. I’m okay with this too, if you must, but the GBTC has an enormous premium over its NAV versus the underlying Bitcoins’ price because of how few other choices institutions have to get direct exposure in traditional brokerage accounts.

But the oil and gas stuff, the agriculture stuff, it just doesn’t work that way. The ETF sponsors are not sitting on vaults full of physical commodities to “back up” the dollar value of their funds. Investors are relying on the sponsors to be able to trade their way into representation of front-month tracking of commodity prices and it’s really, really hard to do in an ETF wrapper. Should oil prices rebound, it’s not clear that investors in USO will capture all of that / any of that rebound. They most definitely captured enough of the crash.

I’m not just saying this now because oil has crashed and the USO ETF is in a bind. I’m not a Monday morning quarterback on this topic. I have been saying this for almost a decade. There’s a worthwhile debate over whether or not investors need to have commodities as part of their portfolio. They represent a diversified return stream that can be uncorrelated with stocks and bonds.

Commodity “investing” – distinct from commodity trading – became fashionable in the aught’s decade while the emerging markets were in building mode and US stocks were having a lost decade of returns. Long commodities as a theme has not been going well over the last decade. But, if that’s a return stream you really feel that you need, this ain’t the way to get it.

Michael and I talk more about USO here:

And read my friend Izzy in the FT:

Can the USO fund collapse? (FT)