Look at this idiot: 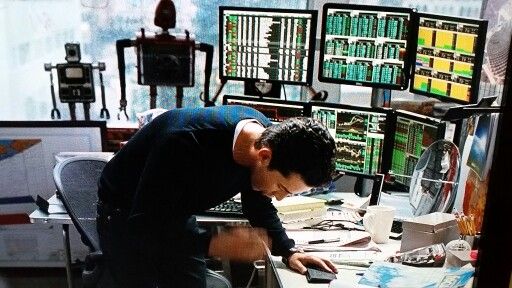 This is from Wall Street 2: Money Never Sleeps (oh my god).

Here’s the funniest joke of the movie, and it’s entirely unintentional – this kid sleeps five feet away from a rack of Bloomberg screens in his apartment, and still manages to miss the biggest financial crisis in 100 years. Maybe if he had twelve screens instead of six, he’d have had twice as a good of a chance to see it all coming.

Anyway, Shia LaBeououfueoef (I think I’m spelling that right…) plays a character named Jacob Moore, whose job description on Wall Street doesn’t actually exist – in one scene he’s a trader, in the next scene he’s a VC raising money for some sort of alternative energy project, in another scene he’s listening to a retail stock brokerage sales meeting, then he sort of works at a hedge fund, then he’s an analyst, then portfolio manager, then risk manager, etc.

Starting your day waking up next to a phalanx of Bloomberg terminals isn’t going to be any more helpful to your investing than standing on your head. And the very worst thing you can do is flip on the news when you open your eyes. I never start my day watching business news or political news. Most of what’s being discussed at 5am or 6am will not even end up mattering later that morning, never mind by the market close or the next day. Producers have to work with what the headlines and wire services give them. They’re never going to be like, “this is probably unimportant, let’s run a Cheers episode and head home early.

So I start my morning with podcasts and music and, increasingly, with Amazon’s Alexa. I want to be educated and entertained on my own terms. This morning I woke up and asked Alexa about the weather. No wind, bright sunshine. Perfect for a ten mile bike ride down to the beach. I put on my friend Patrick O’Shaughnessy’s Invest Like The Best podcast and get to hear him speak with David Epstein, author of The Sports Gene and the new book, Range, which looks at why multi-sport athletes and multi-career professionals and multi-discipline learners have a big advantage of the majority of people who begin specialization early in their lives.

It’s an incredible conversation, don’t take my word for it, go listen. I come away from it thinking in larger, broader terms about what I am trying to do, and how little I understand about my own abilities and shortcomings. This is the frame of mind I want to be in before my day gets started – thinking about the big picture, not coming up with explanations for why S&P futures are up or down half a percent this morning. Who gives a shit.

Then I get home and I’m talking to Alexa again – “Alexa, play my flash briefing.” I get an update from TD Ameritrade for Advisors, which was created by my friend Dani Fava, the head of innovation for the custodian brokerage we use. The next one that plays is by my own voice consultant, Emily Binder, called Beetle Moment. She spends a minute or so talking about trends in the voice, podcast and smart speaker industry, which is exploding right now. This is information I actually want and need, not random “stories” of the day.

After that, I get a Market Moment episode – this is the Ritholtz Wealth Management flash briefing. Rather than give you trivial information about the nonsense du jour “…and in Washington this morning, President Trump tweeted that James Comey has sex with perforated pumpkins…” There’s already enough of that. Market Moment, on the hand, takes roughly 60 to 90 seconds to tell you about something historical that happened on this day in history, and then relates it to something happening in the modern era. This is called CONTEXT and it is way more valuable for investors than becoming a micro-expert in whatever micro-topic is dominating today’s conversation. You have to know that everything has already happened before, with only the details being slightly different. Market Moment reinforced that. Bob Marley: “If you know your history, then you would know where you’re coming from.”

Here’s my colleague Tadas Viskanta (director of investor education at RWM) telling the story of today in 1968, the first time the S&P 500 crossed above 100:

Human beings never change, there is greed and there is fear, and we oscillate between the two things all the time, individually and collectively. There have been booms and busts and innovations and new industries and dying industries and everything else happening now in both the recent and distant past. Market Moment tells these stories concisely and makes you a more knowledgable investor. Enable our skill and make it part of your flash briefing today. Or don’t, what do you want me to tell you?

So at what point to I start paying attention to the news of the day? I might click a few links on Twitter or from The Compound site, which is the aggregator and curator we built for investors (thousands of people follow The Compound on Twitter), but I’m not watching any TV or listening to any business radio until closer to 10am. My philosophy is simple – I’m not going to react to the news of the day, so it can wait.

You will meet zero investors who regularly buy and sell profitably on headline news. Zero. Not even one. It cannot be done. It’s a guaranteed money loser. Anyone who doesn’t know this yet will know it eventually, when they look back at their results and realize they’ve beclowned themselves. Unless they’re delusional or their chosen profession demands that they not learn this lesson for themselves.

I am interested in the news and being up to speed is part of my job – but in a different way than you might think.

What I’m looking at is not the headline itself, but the reaction. So beginning around 10 am or so, I start looking at prices and charts and trends. I want to see how the market is processing all these news items and events. I do a TV show a few days a week on CNBC called The Halftime Report. It’s on at the perfect time – 12 noon ET. By that time of day, we get the full reaction in stocks, bonds, currencies, commodities, etc. The market has already discarded the stuff from 5am that wasn’t important and the investor class is now working its way through whatever news has hit since the opening bell. Prices at midday are truthier than prices at the open because we’ve had time to digest what’s happened and what it might lead to.

You’ll see me talk a lot more about price and sentiment (through the lens of technicals usually) than I will about the “meaning” of the news itself. The “meaning” discussion has already taken place for hours by the time I’m on. I’m here to talk about the ramifications. This is where having all that market history and context comes in handy. I try to be the person telling people what they can ignore and why they don’t need to make radical changes or have a big reaction in their investment approach. It’s almost always good advice, which is why I’m still legit and haven’t been turned into a cartoon character after almost a decade on air.

One other thing – the most crucial thing I want you to heed me on in this discussion – never, ever, ever, for any reason, watch the local news. It’s horrific and moronic in so many ways and offers you absolutely no value in any way, shape or form. You don’t need to hear about murders, or child murders or gang violence or whatever terrible thing happened overnight. It’s not going to help you accomplish anything. You can get the sports scores and weather and traffic from an app. You also don’t need to know that there was an earthquake halfway around the world, so stay away from CNN too. People a hundred years ago didn’t know about any of that stuff and they lived their lives just fine.

Lastly, turn off all notifications from all apps on your phone, if you haven’t already. News apps are designed to suck you in from your phone’s home screen back into their environment – so that ads can be shown and your actions can be measured. It’s not news that matters to you, it’s a hook to pull you away from your life and into their trap. Turn that shit off. Consume your news the way you consume your food. You decide when you need a meal or want a snack, and then you go get it. There isn’t some motherf***er following you around throwing cupcakes in your path. When you want to know the news, you know where to get it, you don’t need the news coming to you and pinging your screen. Don’t be a lab rat. You decide when and what you’ll consume, they don’t get to decide that for you.