First of all, congratulations to my friend Ari Wald on the fifth anniversary of his weekly technical note, Inflection Points, for Oppenheimer & Co. I’ve been reading him since the beginning and posting his insights often here at TRB.

Ari makes sense of the price action and market cross-currents in a helpful, non-pedantic way, with enough detail for serious technicians but not so much so that you can’t understand what he’s saying. And his charts are always illuminating, no matter what’s going on.

Okay, here’s what Ari wants you to know about what we witnessed last week – a sell-off in the 10-year treasury yield that led to an inversion, along with the typical bludgeoning of the bank stocks that need a positively sloped curve…

It was ugly, but it doesn’t scream “TROUBLE!” for the US economy or the financial system. Ari chalks up the drop in rates to a technical follow-through for what’s happened with the German 10-year (negative yields again). Most importantly, there are no signs of credit stress in the major indicators, which is key if you’re buying on the dip…

No Signs of Major Credit Stress

The cautionary drop in interest rates isn’t being confirmed by signs of major stress in high-yield credit spreads either, by our analysis. While high yield has underperformed both Treasuries and corporate bonds in March, weakness hasn’t been meaningful in relation to the year-to-date outperformance going into this March peak; i.e., it’s been within trend, in our view. It’s also interesting to note that while banks have been a key underperformer in the equity market since the start of the month, the industry has surprisingly outperformed within the high-yield market. 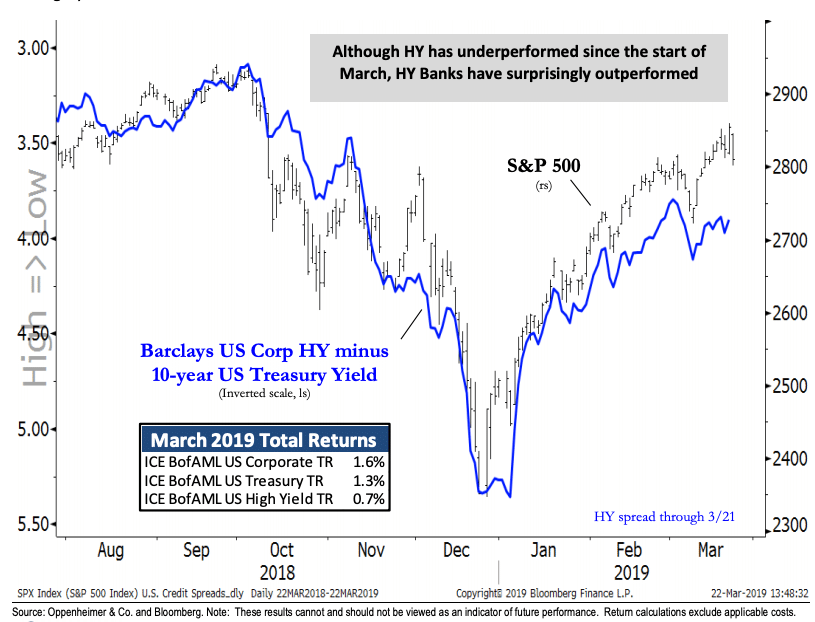 Ari goes on to show that, for the month of March, high-yield bonds issued by banks are the top total return performing credits, still up 1.8% in March versus the return for the entire high-yield index of just .7%. So if you thought people were selling assets out there because they think there’s some fundamental issue with the economy or the financial system, you’d be very wrong.

Ari’s take is that we’re back to lower growth expectations, which is not the same as a recession, and that this environment should favor the equities that have faster-than-market secular growth stories (think Microsoft, Amazon, Alphabet, etc) and the SaaS stocks. If they keep getting cheaper because the market is focused on the problems in Europe, that’s the pitch you’ve been waiting for, perhaps. US investors will come back to them if they keep exceeding the growth to be found elsewhere.